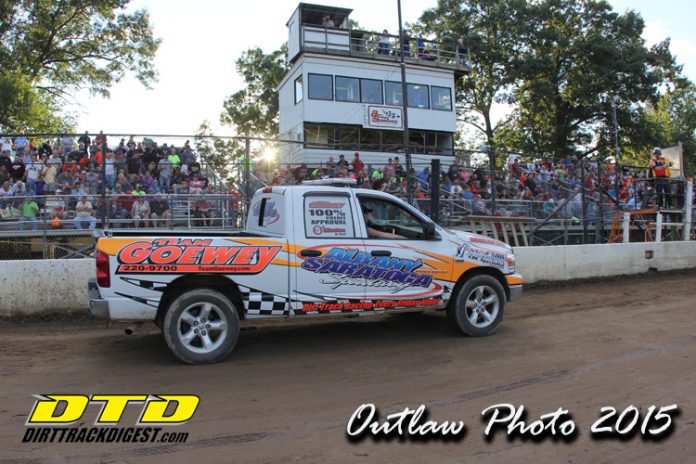 “We are proud of the Albany-Saratoga Speedway and want to see it be successful for a long time into the future,” said Malta Town Councilman Tim Dunn.

Dunn, in an exclusive interview with Dirt Track Digest, talked at length about the importance and value that the historic speedway brings to Malta.

Recently, 150 people attended a town meeting believing that it was an effort to impede the future of the track.

Dunn, who took the brunt of the passion fueled heat from fans and drivers, felt it was necessary to clarify the entire situation and agreed to talk with DTD.


In regards to bringing the topic to the town board agenda, he said, “I really felt that it would be a good opportunity for everyone to come together, get on the same page, learn about the speedway and make sure neighbors understand what to expect and to help long term. People who don’t understand sometimes can get ticked off and start complaining which I don’t want to see happen here.”

Discussing the background of what led to the misconception of the town attempting to pressure the track, he said, “Every year when the speedway opens we received a number of complaints about noise. Usually it is just a bit of grumbling. I’ve heard from a lot of people that the speedway is only allowed to operate on Friday until 11 p.m. I think everyone just took that for granted. I dug in and researched it only to discover that it wasn’t true.”

Continuing he said, “There are two things. One the speedway was there before the town had zoning and is a legal non-conforming use and secondly is a noise ordinance which restricts noise of any business at certain decibel levels. In 2012 it was amended and specific to exempt auto racing.”

He noted that he thinks one thing that drew additional complaints was a recent midweek show.

Dunn noted, “A few Tuesday nights back Brett Hearn had the special Big Show and it was a little louder and people weren’t use to hearing noise on Tuesday night. We got complaints and a handful of formal complaints were submitted with the Code Department and there were a bunch of calls and emails. Other folks in the town also received complaints.”

Continuing he added, “Certainly in no way, shape or form did the town want to hurt the speedway or put them out of business. There were questions from residents and we were seeking the answers. So I asked if noise from the speedway could be put on the town agenda as a discussion item to give a clear picture of what we wanted to discuss. Those restrictions that people thought existed don’t exist and I wanted public dialogue to create clarity.”

However, someone posted a sign on the pit shack at the track indicating that there was an effort to close the track.

Dunn felt some misinformation was publicized and this lead to an emotional showdown at the meeting.

Understanding race fans are passionate, Dunn said, “There was an article that simply was to rile up people and I feel it was dishonest and irresponsible.”

The town councilman noted, “The speedway is a big benefit to the Town of Malta. It brings thousands of people to our town to spend money and it is a big part of the heritage of our town. It is a wonderful attribute to Malta. Lyle (DeVore) and his team are doing great things over there.”

Reflecting on his philosophy as a Republican he said, “I’m a Republican and I’m not crazy enough to put a successful business out of business. I would have to have my head examined if I did that. In fact, I grew up in Mohawk and went to Fonda. I have friends who went and still go there and in fact my dad’s friend worked on Chad Edwards car so if I tried to close a race track I couldn’t show my face there.”

Dunn explained, “Lyle and his team are doing a good job building up the track.  Years ago there were a variety of events there throughout the week. Lyle is doing everything to be a good neighbor and to accommodate the concerns of all while running a quality facility.”

Continuing he talked about the area by saying, “Malta has some cool things like having a historical race track and Saratoga is just up the road.  We have an internationally recognized rodeo in Malta. We have unique things here to visit and we like people to spend time and money here. Businesses are supported with folks coming for the speedway. Universally, the people who have contacted me it is about the noise that is the problem. No one wants to see the speedway closed down. They don’t want to see it go way. It makes us interesting and we have to help people have a better understanding that when the track is racing so the noise will be expected.”

There are two sides to every story and sometimes emotion takes over and when it does it presents some difficult opportunities to get a message across.

Dunn, during the conversation with DTD, said what most race fans wanted to hear as he said, “There is a rich racing history here and I think universally the town government will do everything we can to be sure the speedway is around for a long time as it is a beneficial attraction for Malta.”