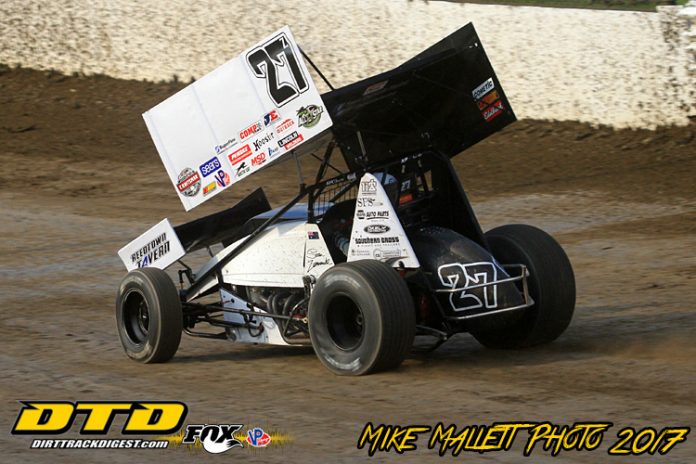 Our Summer is their winter down under in Australia. It’s a cyclical thing, when we have winter our guys and girls visit Austrailia and in our summer we see their chaps come over here.

The goal for many Austrailian Sprint Car drivers is not to make it a visit but to make it a living. Garry Brazier, Max Dumesny and others paved the way back in the 90’s.  Then you had Brooke Tatnell and Kerry Madsen who found the ultimate. Madsen even became a full-time World of Outlaw traveler for several years.

Oh there’s others, Lynton Jeffrey, Jamie Veal, James McFadden and Sean Zemunik….Wait, what?, Who? Sean who? Hey, even I had to Google, he’s got a Facebook, I had to stalk and friend. In 2017, this Zemunik has been all over the US.

WoO, All-Star, Central Pa Speedweek, Ohio Speedweek and then when I came from NY to Ohio and the Kings Royal there was his #27Z sitting in the pits. It’s a modest outfit, just a pick up with a smaller sprint car trailer but yet this Summer this rig has been EVERYWHERE.


This is Sean’s second tour from his Perth, Australia home here in the States. Last year was sort of get to feel of what this is all about (22 shows) with this year putting together an ambitious schedule of 50 plus.

His crew chief is his dad Rocka and his wife Deborah also flies over with him and it’s on the road from May to the end of July.

As I came up to Sean, I simply told him that I have been in this game a while, I just want to know how you do it? And as he said with a laugh, “Sometimes I wonder too!” Sean then went on, “I work hard at the business (Statesman Financial Solutions were he is a financial adviser) for nine months saving as much money as I can before we come over. Then when we are here we try to save as much as we can.”

“We pick up second hand tires from the teams (And the back of the pick up was FULL of them), there’s a lot of nights in Motel 6’s or Super 8’s and then we just don’t do much else but race,” he went on telling his unique story, “I have some friends that help but in a round about we we own our stuff but as you can see it’s a very modest but it gets us by.”

It’s an exact 90 day tour that goes to the end of July, Sean actually kids “Yea, it’s end of July before they kick us out,” saying with a smile, “We will run the MOWA Illinois Speedweek and head back.”

Zemunik sort of calls Attica and Wayne County his base when he’s not on the road. But, the road is key to him showing as many people as he can to maybe attract a US sponsor or two to help out. The #27Z is always looking sharp but Sean will be quick to point out that there are no wording on the wing or side of the car. All the funding comes from him at the moment.

“We have a couple of spare motors to get us thru but our main motor we are lucky to get 800 horse power out of it but they work well for us,” Sean went on, “Qualifying is hard for us but as the show goes on we get better.”

In talking you just had to ask Sean simply is this fun, “Oh yea, if we didn’t have fun you wouldn’t be doing it. It might not be as much fun now as we are close to the end as it was when we started but yes,” reflecting back on the Summer, “You always like to have better equipment that’s a bit a frustrating, you always want more horsepower and all that but I understand that and we do the best we can.”

Then it was asked do you want to become a full-time driver in the states and possibly have the success as maybe a Madsen, “It’s certainly the goal, yes, with the business I can make it happen if the opportunity came up,” Sean continued, “I would jump at the chance to run a full series. It would be a goal, even do it ourselves would be an ultimate goal but running for someone else is probably more realistic.”

In looking at his stats, Sean’s a winner down in Australia where of course he’s way more familiar at his hometown tracks. In his 2017 tour qualifying for the shows with mostly the WoO and All-Stars is the main goal and then going from there. Sean has achieved that goal in almost all the races he’s entered which is a huge feat.

When he finished third at Wayne County on July 8th you can also tell that was popular by his fellow competitors with all the well wishes.

Sean Zemunik might be living out a dream, it’s one with a lot of hours and hard work but he is hoping all of that will pay off in possibly being the next Australian that calls U.S. his home for sprint car racing.