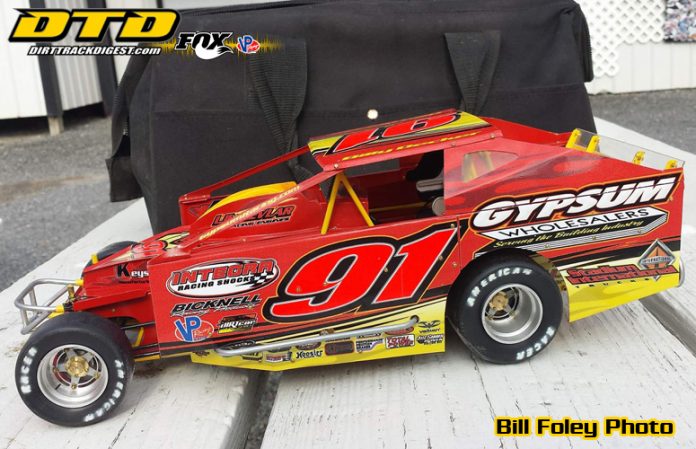 When does a race car model become a work of art?

Well, long time fan Jim Butler might have the answer to that question.

After years of working on pit crews and being a fan, he undertook a project that is relatively unbelievable.

A couple of months ago Butler displayed a brass tubing frame that he had built from scratch and last week he showed the completed Gypsum Express 91 to its former driver Billy Decker.


This wasn’t a model, but a work of art which earned him quite a bit of respect from those fans and those pit side who appreciate this type of construction.

Butler has been around racing for quite some time.

Reflecting on his history he said, “I became a fan when I was 10-years-old at the Watertown Fairgrounds. My favorite driver was in #117 and it was Don June. He said he had the number because he could paint it on with a barn broom. He had a Chevy six cylinder and I fell in love with racing.”

Continuing he said, “After high school I would come to Brewerton and spend time in the pits. I had a couple of big Irish friends and when cars needed to be moved around they would lift them for the teams to get them in position.”

However, then it was off to Oswego where, “I was crew chief for Freddy Graves for seven years in the late 60’s and 70’s. Fred was my wife’s cousin and I could have gone NASCAR with them, but we decided to stay here in New York. I went away from Oswego as the rulebook was getting too tight and builders couldn’t be creative anymore.”

So back to Brewerton he went and got interested in something he had never done before…constructing cars to scale.

He wanted to do the Gypsum team car and said, “I told John Wight I wanted to build a model of his car and he arranged for me to have Scott Jeffery let me go in the shop about five years ago. I was able to take as many photos as I wanted. I crawled all over the place taking pictures, but then Rob Hile and Scott had a stripped car and I used it for a blue print for what I did.”

Butler continued, “I had built things all my life and before I started doing the Gypsum cars I had built three completed 10th scale Ferris Lawn Mowers. These had all working part and when a cable was moved it was attached and would make that part of the mower work.” Then he got interested in something different and explained, “I had built two plastic cars. One was of Larry Wight’s car and the other a rolling chassis that is in the Gypsum shop.”

However, that wasn’t enough.

He noted, “I wanted to try to build a metal one. I had a concept in mind.”

Well, there were a couple of bumps as once again he took pictures of the 2012 Billy Decker 91 Bicknell and returned time and time to the shop to be certain of the accuracy of what he was doing.

Butler said, “I didn’t even know how to solder and the frame was going to be made of brass tubing.”

He learned and over a span of five years and maybe a total of 80 plus hours the car became a reality.

Graphics were a major concern as with all the work to the frame and the other suspension parts he wanted to be sure that it would look authentic.

Dan Gill of Atomic wasn’t anxious at first to be involved.

Butler explained, “Dan said he didn’t do graphics for toys, but when he saw what I was doing he said it definitely wasn’t a toy and would be glad to do the wrap for the car.”

When the project was completed all Butler wanted a photo with Billy Decker and the car.

Decker said, “It was great. There was plenty of tedious work that went into this. It has to be a measure of perseverance. I sure appreciate loyal fans like Jim.”

Jim Butler is a gentleman racing fan and he likes his drivers to be to have that character trait.

Reflecting of his time around Brewerton he said, “Jackie Naum was my favorite back in the early years, but my let me tell you Sam Reakes was a real classy guy. I see them as gentlemen racers and work hard and got it done. I never really mattered to me if they won, but I appreciated the hard work and dedication along with just being gentlemen.”

Well, hard work and perseverance is appreciated by Butler, but he also displayed that in his marathon project to create something that simply wasn’t a model, but a piece of racing art.

When asked what he was going to do with the car he said, “Well hopefully someday it can have a place over in Weedsport in the Dirt Hall of Fame. If it is worthy.”

It definitely “is worthy.”