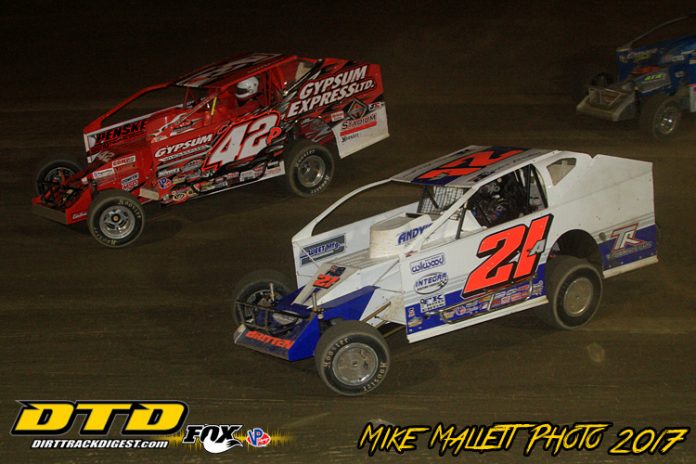 Peter Britten finished dead last, 32nd to be exact, when the Super DIRTcar Series made the trip to Eldora Speedway for the first time in ten years in 2016. The Australia native returned the following night for a bit of redemption as he finished second in the 25-lap Modified invitational event.

Fast forward to 2017. A lot has changed for Britten.  He’s no longer behind the wheel of the Heinke-Baldwin Racing Modified that helped get him to that second place finish.  Instead, he’s wheeling his self-owned and funded No. 21a. In the 75-lap Tuesday Night Tailgate feature, Britten drove that car to quality fifth place finish.

“That was good fun,” commented a smiling Britten afterwards. “I’m just happy to be able to hang on to the top five. A top five for us is pretty much a win. Whenever we can put our little team up there we’re pretty happy about that definitely.”

Britten was part of one, if not the fiercest battle of the entire event. Every restart, of which the middle of the race saw plenty, was a mad dash off the fourth corner to see who could get the upper hand to gain positions. He ran as high as third, even battling Pat Ward for second, before surrendering a couple of spots on those restarts to Matt Sheppard and Brett Hearn.

After Sheppard and Hearn got by, Britten fought tooth and nail with Stewart Friesen late to stay in the top five.  That was a battle he eventually won.

“It seemed like every restart after that me and Friesen exchanged slide jobs for a couple laps, then we’d settle out again,” stated Britten. “It was a lot of fun racing with Stew and all them guys. No one touched out there at all. That is what you can do with this kind of race track. It’s called the ‘Eldora slide job’ for a reason.”

Britten relied on his notes from last year’s event while also looking for something extra. He took what worked and tried to apply that to the way he setup his Troyer car for the night. It seemed to play out nearly perfect. Although Britten would have liked a few more laps as he felt like he continued to get better the longer the race went.

“We changed a few things in our program since then so it’s not just go straight to that setup,” cited Britten. “We took elements of what we liked and what we thought worked well. It’s still got a few little bugs we are working out. I’m quite happy with the way it’s running. I think we’ve got some more potential. We were off on the gear a little as well. I know we could have been better, but to come home with a top five is a win for us and to be competitive with all them guys. We were pretty tight at the beginning. It was hard to hang onto. From the mid-point on we were pretty good. I would have liked it to be a 100 lapper.”

Britten will be in Wednesday night’s 20-lap Modified invitational looking for a few more spots. Who knows, if things fall the right way fans may see an Australian other than Kerry Madsen parked in victory lane at Eldora Speedway.