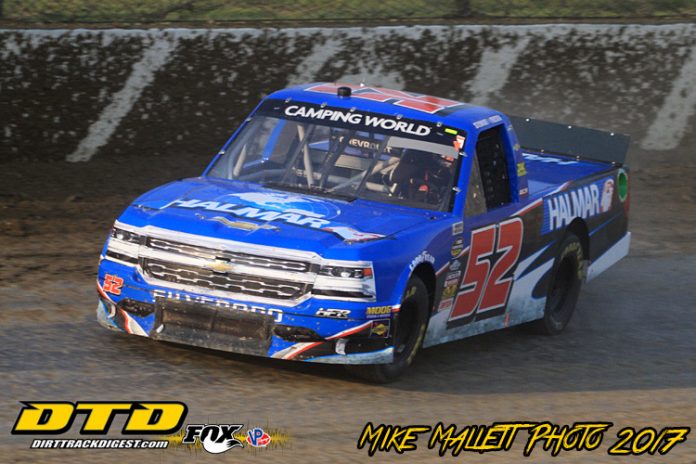 That is exactly how many times Stewart Friesen toured the Eldora Speedway on Tuesday afternoon and evening. The Sprakers, N.Y., star turned 87 laps in a truck and 89 laps in a Modified as he practiced for the Eldora Dirt Derby for the NASCAR Camping World Truck Series while also competing with the Super DIRTcar Series Modifieds. Needless to say, he was constantly doing circles either on the track or from pit area to pit area.

“I did a lot of laps today,” said Friesen from the Modified pits when all was said and done. “It was good. I had a fun day.”

For Friesen, Tuesday was a return to where it all begin in the Camping World Truck Series. The Halmar Racing Team did a one off race last year which blossomed into several more events to close out 2016. Then it was announced over the winter that Halmar Friesen Racing was formed and he’d be making a go at nearly a full schedule in 2017. Now, with that experience under his belt, Friesen is ready for a second go around on the dirt. He feels like he is much improved from last year and during practice things got even better.


“It’s a lot better,” said Friesen when asked about the difference from 2016. “We’ve made a lot of improvements.  We’ve even improved since we did the tire test here a couple months ago. That was pretty beneficial. It’s pretty maneuverable in traffic. We’ll see what we got. We made a lot of adjustments in practice. Messing with the front sway bar and some stuff that I’m not super used to playing with all the time. It was good. We got something that is maneuverable. It was good on the bottom and in the middle. We’ll see what happens. It’s going to be a wild race either way.”

In the first go round in practice Friesen went out and put down the fastest lap of the session. In the second session he was 11th quickest overall. He waited until late in the run to make sure the truck was where it needs to be for qualifying and the main-event on Wednesday.

“That was big,” cited Friesen about being fastest in the first practice session. “That was something we wanted to do. To get out early in the first practice and put up a time. I didn’t think it was going to be that quick. I’m happy for the Halmar Friesen Team. To have something to write home about is cool. We waited in the second practice and went out there when the track was blown off and had something that was pretty good.”

Friesen was constantly monitoring the other top competitors including former winner Christopher Bell. His times weren’t that far off giving him something to be pumped about heading into the big race.

“We had some good times relative with the track,” mentioned Friesen. “I think we were in the top five. Chris Bell is super-fast right now. We’ll see. I think we have something to race him. That is pretty exciting.”

In the Modified portion, Friesen battled from a poor draw of 12th to nearly sneak his way into the top five after setting fast time in his group in time trials and winning his heat. He was there, then he wasn’t depending on the restart. Eventually he settled for sixth.

“We had a good car,” stated Friesen. “I have to thank the Halmar team for everything they do for us. It’s cool that (Jimmy) Horton, (Matt) Janiak and us are out here supporting this show. We had a fun day. We came up a little short in the Modified. I thought we had a great car but the track position was tough. It was racey the first couple laps then it got one lane, not one lane but one preferred lane. Other than that we were good.”

Friesen will be back in action on Wednesday night as he chases Camping World Truck Series glory in the 150-lap Eldora Dirt Derby. Qualifying is slated for 5p.m. with the feature scheduled for action beginning at 9:30p.m.  Fans not able to make the trek to western Ohio can watch him qualify on Fox Sports 1 at 5p.m. with heat race action at 7:30p.m on Fox Sports 2 before moving to the Fox Business Channel at 9:30p.m. for the feature event.