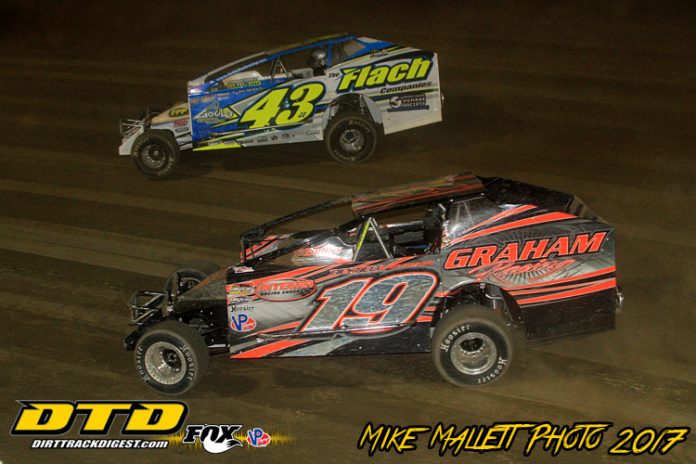 When Keith Flach exited his #43 you can tell he was in a battle…a 75-lap battle around one of the Nation’s most famous ovals, the Eldora Speedway.

The Ravena, N.Y., star and tour regular came home in eighth place when Dave Farney waved the checkered flag. Now eighth you would look at this as okay, not too bad, a top ten, decent finish so let’s load up and head to the next race.

However, when Flach did the exiting of his car, yes he was in a battle but you can tell he felt like he came out on the winning end.

“That was the hardest working day we had as a team in a long time,” Keith exclaimed, “We started the day with the primary car we run on the tour which we fired up at Albany but had carburetor issues. We thought we had it fixed, unloaded here and it still wasn’t right.”


Flach went on about the next plan, “So we unloaed the Lebanon Valley car which still had the Valley set up and it wasn’t even close for here.  We struggled in time trials bad, struggled in the heat terrible, struggled in the B-Main terrible so we just threw everything at it for the feature. We figured it was going to be a home run or a strike out.”

To make matters a little trickier, in the heat Flach found his Bicknell solidy in the turn three wall. An unforgiving spot at Eldora. “Yea, we got jammed up in traffic. I jammed on the brakes to avoid somebody and it went right into the fence. So the whole day was a struggle and that added to it.”

Just like last year, after the NASCAR trucks ran their second one hour practice Tony Stewart and track crew spent the better part of an hour reworking the surface to give the Modifieds a track they are more accustomed too instead of the wicked dry slick that the trucks require.

“Tony did that last year so we kind of planned that they would do that again and then the DIRT officials came around to tell us also,” he said on the surface change.  “So we planned on the first twenty or so being heavy. Then it did slick off at the end which we also figured it would.”

When the feature event started, Flach picked off some cars early and he knew they had something to work with. “Yea, we hit the home run on the set up,” he simply said.

“We just had a good car and rolled the bottom really well, I just kept trying to get by as many cars as I could and I guess we rolled it in eighth and I’ll tell you it feels like a win to me,” Keith quickly went on to thank his team. “It turned out to be a good night.  I am so proud of my guys and can’t thank them enough for hanging in there especially how bad it started.”

Eldora is famous, it’s known around the world and Keith Flach knows the importance to have a that is germane to just the Northeast to be there and to share a stage with one of the biggest divisions in the country, the Camping World Truck Series.

“It’s deinitely special to come here with all the history that’s here. I wasn’t on the tour when they came here for the first time so the minute they were coming back and I was on the tour I was real excited to come here,” commented Flach on Eldora. “It’s such an awesome place, I know about the Late Models and Sprints here and to be with the trucks is big. I am so happy to be here but really bummed that this I guess is our last year. If we don’t come back it’s something I can check off in my notebook.” Brandon Walters darn near put his family owned No. 22 into a top ten finish Tuesday night at Eldora… darn near. He faded in the last five or so laps and came home with a still respectable 11th place finish. Here though, that 11th doesn’t show how good he was on the famed half-mile.

“You know being at Eldora and walking out with what should had been a top ten, maybe even a top five if we didn’t make contact with a car there late and cut down a left rear down is really cool,” the Unadilla, N.Y., driver said shortly afterwards. “We passed a lot of good cars for how much horsepower we are lacking for this big old place and how fast it was it makes you feel good.”

Just like Flach, Walters ran the consi (which he finished second) and started deep in the field so when the green flag dropped he also had some work to do.

“We faded a little early but then we started to find a lane and get by cars to come up to eighth or seventh is an accomplishment, would have liked a top ten though,” he went on. “We have the spec engine and it has it’s pros and cons. But when there are patches on the bottom like today I can really hook up, but it sure does hurt when it’s tacky.

“I just have to thank so many, we work hard at Big Top Ice Cream so I can do this and really have to thank Mike Maresca and his father,” Walters told about a story most didn’t know. “Yea, we were really in a pickle when our truck took a dump in the engine so we needed something. I called Mike and without hesitation he offered a truck for us to use. I also have to thank all the sponsors that help me, of course my mom and my dad, Bicknell, Integra there are just so many”

Walters is so quick to thank everyone as he has been on the Super DIRTcar Series this year. A grueling tour against the very best in dirt modified racing traveling long miles and many hours.

“We had it in our mind at the beginning that we wanted to try the tour, it might be a one and done for us cause of the expense and the experience you need,” he continued about life on the road. “It is good to get your feet wet though with these guys. Anytime you get a top ten it feels like a win, these guys are so good.

“It is second to none to battle veterans every race and to pass a lot of them tonight I was very, very happy.” Walters proudly noted.

While Billy Decker took most of the accolades and deservedly so as well as most of the lute, for Keith Flach and Brandon Walters what might be the last time for the big-block Modifieds at Eldora it will be a memorable one.