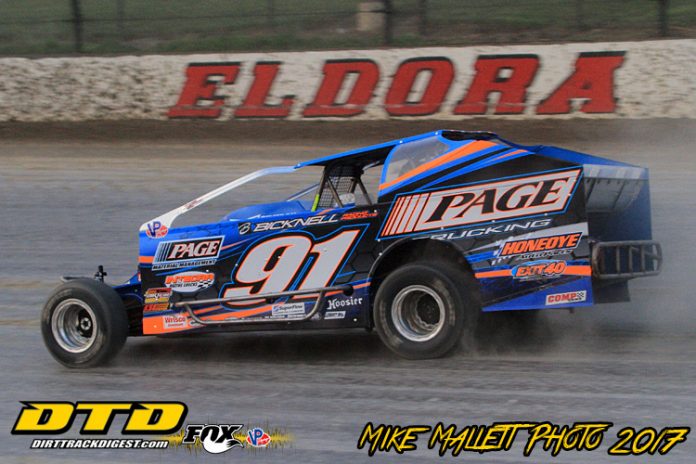 The thorn has officially been removed from Billy Decker’s side as he dominated Tuesday night’s 75-lap Super DIRTcar Series event at the Eldora Speedway en route to winning his first ever feature event at The World’s Greatest Dirt Track. The Unadilla, N.Y., driver led the entire way in claiming the win and the $6,000 winner share in the ‘Tuesday Night Tailgate’ event.

Decker has shown speed in the past at the high-banked half-mile, but Tuesday night was the first time things finally went his way. Everything seemed to play out perfectly for Decker as he drove his Mike Payne Racing No. 91 to the win.

“It’s big obviously,” commented Decker afterwards. “Matt (Sheppard) said it last year when he got the win on the second night. This place has been a thorn in my side. I had a pretty good race a few years ago and (Tim) Fuller and I were dicing it up with a lapped car. I feel like it got away from me. I really wanted to win at Eldora, one of the marquee speedways. It’s big. It feels really good.”

Decker was aided by the luck of the draw as he pulled the pole position to start the feature. That was all he needed as his car was fast from the get go. He set quick time in his group, dominated his heat race before stomping the field in the feature.


“I was fortunate to draw a good number tonight,” cited Decker. “So far this year I’ve been drawing a good number and backing up. I really didn’t want to do that. We had a really fast race car when we got here tonight and we didn’t slow down.”

Due to the amount of mid-race cautions. Decker found himself in traffic on a few limited occasions. He fired great on restarts so he was happy to see the yellows which meant that he wouldn’t have the same troubles that derailed his chances in the past.

“Lapped traffic was getting a little bit dicey there,” he said. “A couple guys would run a line then move the next turn which makes it hairy. I thought I was firing really good on the restarts so I didn’t mind seeing those cautions.”

The win doesn’t fix the team’s recent struggles, but definitely helps things moving forward. Decker had strong run go by the way-side at Airborne Park Speedway a few weeks ago and he’s also had a few minor issues pop up on Friday night’s at Brewerton Speedway slowing his hot start.

“Winning fixes a lot of things, but it doesn’t fix everything,” stated Decker. You can’t get the stuff back that you give away. We have a couple of times in series races as well, but you come back and when you win it helps you look forward instead of looking back.”

As alluded to, Decker now has something positive as the Super DIRTcar Series hits the most grueling stretch on the schedule. Teams compete tomorrow in an invitational event at Eldora Speedway before Sharon Speedway’s event on Thursday. From there it’s back to New York for home track action before going north of the border to Quebec.

“Hopefully we can build a little momentum,” commented Decker. “The last few years we haven’t done so swell in Canada. We need to get over that hurdle too. We just look at it one race at a time. We got to do the best we can. We are looking forward to going to Sharon on Thursday night. We had a solid run there last year and hopefully we can do the same thing again this year. We just got to take care of it one race at a time.”