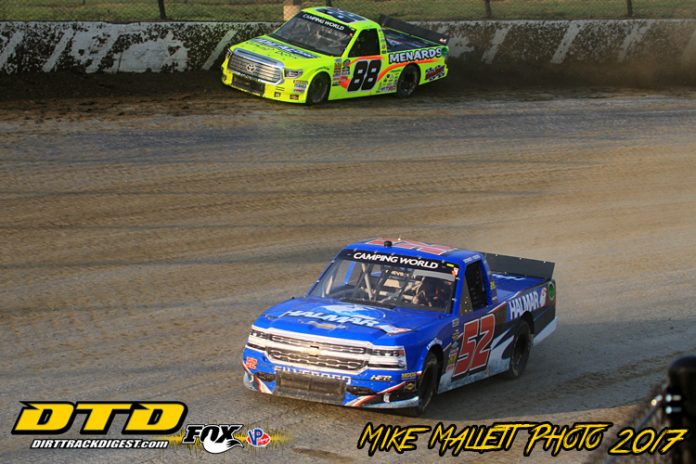 No matter who your allegiance is to in the Northeast racing scene, I think it’s safe to say that a lot of race fans found themselves saying yelling at their televisions, ‘come on Stew’ in the waning stages of Wednesday night’s Eldora Dirt Derby for the Camping World Truck Series at the Eldora Speedway. Whether you’re a Matt Sheppard fan, Brett Hearn fan or a fan of one of the host of drivers that have found success in the Northeast racing big-block Modifieds, on Wednesday night your favorites were out the window and you found yourself cheering for Stewart Friesen as battled for the win in 150-lap affair.

In the end Friesen came home second, one spot short of his ultimate goal. He had nothing to hang his head about. He did the Northeast proud. He put our racing on the national scene and nearly got in done on the biggest stage that most would give anything to have the opportunity to do. It’s almost impossible to remember the last time you heard NASCAR announcers talk about places like Utica-Rome Speedway and Weedsport Speedway. On Wednesday night they did. He didn’t win, but by looking at the Facebook feeds and the Twitter comments, no one can deny Friesen did our folks proud.

“It’s good to run up front and run second,” stated an obviously disappointed Friesen. “Its nothing to say ‘it sucks’ or whatever. When you have an opportunity to win and don’t close it out that burns. To race in front of all my peers there and to represent all those guys in the Northeast and represent those guys that have spent two days busting their butts up on the hill that probably deserve an opportunity like this, it’s cool. It feels good to run and show everyone that we were here. To be on this level, to represent all those guys, is cool.”


Friesen’s Wednesday started out with him earning his first ever NASCAR Camping World Truck Series Keystone Light pole award. He followed it up with a dominating performance in his heat race. From there he led a race high 93 laps. He was close to getting it done. Even though he didn’t, the last two events have seen an improvement for the Halmar Friesen Racing team. He battled one of the best in Christopher Bell before losing in the final laps to series veteran Matt Crafton as he went by on the outside.  That’s racing.

“The Halmar team was great,” said Friesen. “The last two races, even at Kentucky then coming here, everyone has worked so well together and really gelled. I didn’t think we would dominate the race today like we did. I thought Bell was a little faster and maybe some other guys might be a little faster, but it started to play in our favor. Even that caution when those guys got me, they went down and cleaned their tires up. I didn’t know if that was the right move or not. It turned out it was. They got a little bit of a jump. I got racing with (Chase) Briscoe and Crafton got away. I really couldn’t race back to him. Hindsight is 20/20, but Crafton was rolling the top and I should have gone back up there and rolled the top in front of him and played a little better defense.”

Friesen hopes Kentucky and Eldora are signs of good things to come as the team recently took some time off from full-time competition to refocus and get things heading back in the right direction. So far that seems to be working as indicated by owner Chris Larsen after the race. Just like Northeast race fans, Larsen was proud of what Friesen accomplished on the night.

“The turnaround happened at the last truck race,” cited Larsen. “We took a couple weeks off just to regroup, to get our frustrations out of our system and focus on one race at a time. Honestly, we had a circle drawn around this race all year because of Stew’s talent. We knew we would be competitive, given the right equipment. We focused on regrouping and making sure, this car especially, would be ready to roll and the other car, the asphalt car, would be ready. I said, ‘let’s start taking this one race at a time’ instead of worrying about an entire season and how we are doing. I think the guys responded with a little more focus. Obviously they all work hard. They have a lot to be proud of, but we weren’t doing well. We just had to call a time out. We had to change our luck, change our momentum and change our whatever. We have a good car, good equipment and the best driver in the Northeast. We expected a turnaround. I expected Stewart to be competitive today. I know he’s disappointed by not winning because he’s a competitor. I couldn’t be any prouder of him and really he did an amazing job to finish second in this race. I think he proved to everybody that he’s a racer. He didn’t just go around in circles. He raced these guys. It was a hell of a race. You can’t be too disappointed by second place.”

Larsen believes part of that rebound is due to the success the team is having in the Modified. Friesen has clicked off two wins as of late with the Super DIRTcar Series, one at Utica-Rome with his most recent at Weedsport. Confidence is everything and those wins helped relieve the tension and the frustrations that had been building with the lack of success in the truck.

“Success with the Modified car, at least for me and Stew, has alleviated some of the frustration” commented Larsen. “I would say for Tommy (Baldwin) and his guys that are only working on the truck they haven’t enjoyed that benefit of winning Modified races. That was part of getting everything flushed out of our system. The last two or three weeks Stewart has been on a tear with the 44 and that kind of puts us back in the right frame of mind. I think it built the hunger back up in Stew. He was successful, doing well and it certainly restored his confidence. His talent isn’t even in question.”

The break also helped Larsen get the team’s attention on the most important aspect of all, having fun. They weren’t getting the finishes they wanted. As a result they simply weren’t having fun. The trip to Eldora for Friesen and his Modified teammates Jimmy Horton and Matt Janiak went relatively well. It wasn’t all bad as Larsen indicated.

“The big thing is we need to start having some fun doing this,” said Larsen. “We are not in this because we earn a living, except for Stew driving, but we don’t make any money running this NASCAR truck so we needed to have some fun doing it. It broke a really bad rhythm we were in. It’s all good, it’s all looking good. The dirt team is looking up. We came here to Eldora and got four top ten finishes, how bad is that?”

That requires a simple answer, not bad at all.

With Eldora in the books, now they can both look to next weekend’s event at Pocono Raceway with their heads held high knowing they can compete; the can race with best that the truck series has to offer. Wednesday night proved that. And while they are doing that, they’ll hear a collective ‘Come on Stew’ echoing loudly from Northeast race fans.