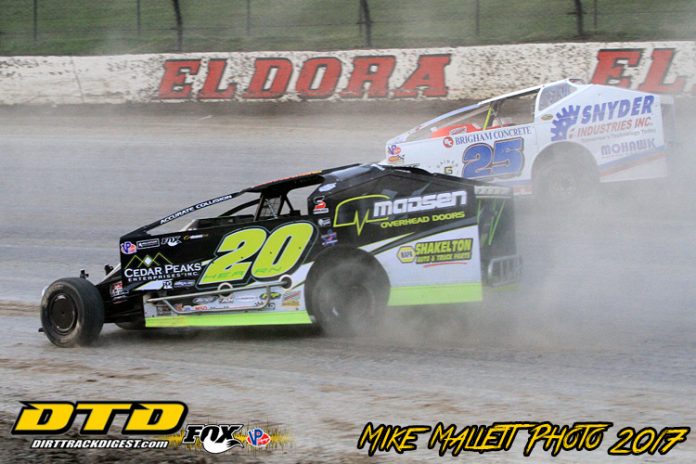 Mike Mallett talked about the adventurous first night at Eldora for Sussex, NJ’s Brett Hearn… His improbable fourth place finish in the Super DIRT Series 75 lapper turned around what looked to be a trip that needed to be forgotten.

A mere 24 hours later it was the 20 lap All-Star Invitation for the big blocks as a part of Craftsman Truck Series double header labeled NASCAR Dirt Derby. Shortly after we chatted with dirt the Modified great who is closing in on 1000 career wins. We talked to him about the 20 lapper, Eldora in general and the Super DIRT Series for 2017…

“I’ll tell you with everything going haywire yesterday I can’t believe we came out of this deal with a fourth and a second,” Hearn reflecting. “The car ran pretty good today, we tracked the leader down a little bit there at the end.”


Hearn went on about the event, “I was trying to keep track of how many laps we were running and I thought we would get to him in time but we were just short,” he went on, “I mean, to come out of here with those two finishes after yesterday was big. I’ll tell you, we almost loaded up and went home cause at first we thought we had internal issues with the motor.

“I’m not totally sure what the deal is for next year (about the mods not returning), but if not I get it,” he continued, “It’s in the middle of the summer, it’s very difficult. It’s very difficult to do our weekend stuff which we are obligated to do and then come out here.  You almost would like a weekend off to do this.”

The Series traveler of over nearly three decades went on to describe the trip, “But anyway, Eldora is a special place and to race in front of a crowd like that I was happy that we put together good run in front of them.  That at least made the trip better for me.”

Then Analyzing the Tour and 2017

“To win the tour this year would mean a lot, we made some big changes this year and my ownership made some big obligations to turn around our performance from last year,” Brett went on in detail, “With last year we tried like hell to do that and make this year better.”

Coming into the Eldora/Sharon weekend Hearn was in the top three in Series points, “With last year we just couldn’t keep up, we weren’t making good decisions and I was mentally drained,” Hearn said with deep thought, “It just showed in my driving and we can’t have that again”

“This year we are definitely had more consistency and that keep’s me sharp, keeps me in shape to race. This tour also keeps me in shape, it can beat you up also, but that’s why I can keep doing this,” said Hearn who is staring at 60 years of age, “We will be in the hunt, if we don’t have any issues I think we have a shot at it.”

When you ask to put heads of big-block modified drivers on Mount Rushmore Brett Hearn is an absolute no brainer, over 40 years behind the wheel and in this times and ages of big block modified racing here he is still mixing it up in championship fight.