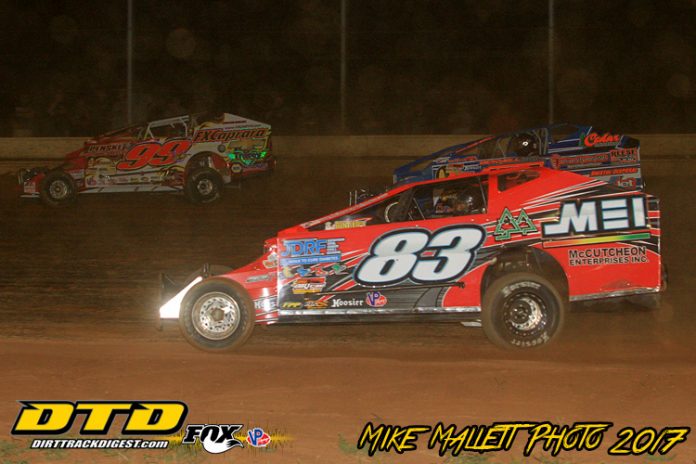 The Super DIRTcar Series for the big-blocks were making their trips back home but before they hit their weekend stomping grounds it was a stop at Sharon Speedway in Hartford, Ohio.

The Buckeye Ground Pounder 100 is actually the biggest race of the year for big-blocks that run the Western Pa/Eastern Ohio circuit. While a regular purse DIRTcar Series event, that purse is some three times larger than the biggest “other” race in these neck of the woods.

Central Square, N.Y., businessman and recent All-Star winner at Eldora Billy Whittaker decided to make the stop. It was a rather tough decision even though it’s on the way back.

“At first I wasn’t going to come, heck we decided Sunday night to actually make the trip out here. Boy, I’m glad I did,” Billy went on. “Tonight is usually my night for me and my son to start the weekend and I’m not happy about that. But, he did get to see me winning so that was cool and you can bet I can’t wait to see home when I get back home here in a few hours.”


Whittaker’s  No. 109 Bicknell was as high as sixth in the running order in the late stages but a late race restart saw him drop two spots at the end to record a final tally of eighth.

“I really liked this track, it was wide, real racy and we did have a good run,” Whittaker continued.  “We time trailed well again and that was key brother. With these guys you need to get a good time and you need to get into the draw.”

“We took off at the start, got under Brett and we were rolling. Now he did pull out on me but I knew we had a good car,” Billy said with a smile from ear to ear. “The car did get looser and looser as the race went on. I got sixth until that darn last restart and some guys rolled the outside. I got what I got and had what I had.”

Whittaker came out of retirement two years ago and then decided to do more and hit the road this year. He is still quick to tell you he’s a part-timer but does have many years experience in what he will say “Back in the Day.”  He was a top runner on what was called the “Outlaw Circuit” before making a career switch that at the time he thought was the way to go.

“Back then you always had thoughts of getting to NASCAR, that’s what I wanted to do.  I was young enough and tried doing it for a living. Some did what these guys are doing now, the Big Block Series, but I thought it was asphalt for me,” Billy stated talking about his past.  “If I didn’t do that 15/20 years ago with ASA and USAC I would be where these guys are now. I’m telling you, now that I do have a taste, these guys are good, I mean the best!”

As Billy was ready to change into civilian clothes and get back to his family and business which will always be number one to him. Ohio was three days that he will never forget.

“I just have to thank Ricky Kluth and then Eric Kinglsey who said to me on Sunday that we were going. They said I have a chance to get three features on tracks that you have never been to which one of them happened to be Eldora,” continuing as the plans unfolded.  “They also said if you don’t go you’ll wish you did and to come away with that win an now this good finish that just made it an amazing trip!”

Brian Swartzlander has been wheeling his mod for many years out this way. When he was a tad younger he ventured into New York State a few times a year to take on the best, he even visited the Mile in Syracuse in October.

When Dave Farney waved his double checkered flag, Swartzlander’s familiar No. 83 was 13th, not headline making for most but out here he was the best of his hometown mates. All 12 cars in front were either tour regulars or drivers that do a ton of traveling where they adapt to any type of track.

“I was up to about tenth and then guys that had fresh tires from pitting got me there at the end on that last restart,” Brian went on.  “All-in-all I am happy. You would like to get into the top ten or maybe even a top five against these guys.”

While the 54-year-old many time Lernerville and Tri-City track champ has logged many a lap, he does realize that the tour regulars just have so much more experience.

“Realistically this is my 11th race of the year, they probably have 11 races in the last two weeks,” he said laughingly. “We will take it.  It’s always fun to race with them but I sure did want to get a top 10 though.”

For the Leechburg, Pa., star, this is one of the races he really looks forward too.

“Yes I do, it’s one we really circle on the schedule and after missing last year I really couldn’t wait to be here.  We had motor problems and I was disappointed,” he noted.  “We like to make it a race and stay competitive and I think we were competitive tonight.”

Sharon laid down a new surface this year and it was indeed racy with fans seeing four wide racing multiple times. Even though mods are weekly here, Brian felt that was an advantage to the tour guys.

“We are still trying to figure out the new surface and I’ll tell you it’s a real good surface. You can race, easy on equipment and look at that tire (right rear) it’s not even touched,” Brian continued about Sharon. “But these guys I think knew what to do on this surface right away. We were here a few weeks ago for the Blaney Memorial and it’s totally different.”

For Swartzlander, he has seen just about all modified racing has to offer especially in his area. It was a 13th yes and many won’t even notice it. However it was at the biggest race of the year against the best there are in this class. He shook hands afterwards and greeted well wishers. He knew it was a job well done.