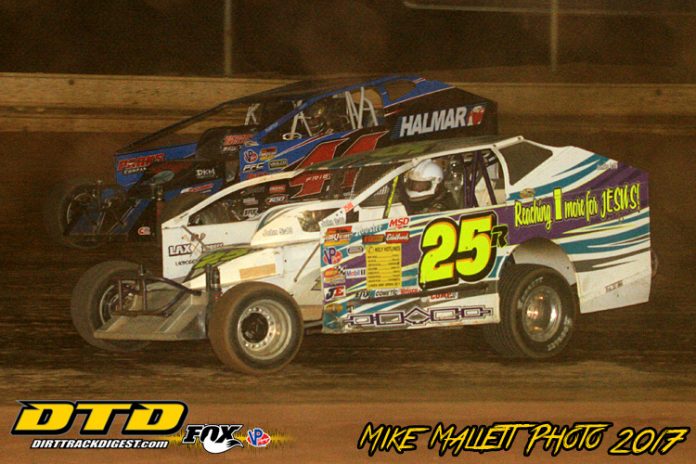 Erick Rudolph and Stewart Friesen put on a show for the fans on Thursday night in the Buckeye Ground Pounder 100 at the Sharon Speedway. The two hot-shoes battled side-by-side for the final 15 plus laps of the 100 lap affair. Eventually, Rudolph came out on top of Friesen for the runner-up position.

“The closing 15 laps Stew (Friesen) and I ran side-by-side with each other,” mentioned Rudolph. “He had a better car early when he first got to me, but I just had a little bit better car at the end. I found something at the end that, maybe we had a chance at Peter Britten, maybe just a small one, if we had a late race restart. All-in-all, the car handled great from qualifying on.”

The effort was a much better conclusion for Rudolph after a tough night at Eldora Speedway on Tuesday which saw him blow the motor in his family owned No. 25. He was disappointed about the results at Eldora. Thursday was a nice pick me up before returning to Western New York for the weekly grind.

“I’m really proud of our team and I’m proud of the car we showed up with here,” cited Rudolph. “I was hoping for a better run at Eldora, but you know, just sometimes misfortunes happen. That’s racing though. You are going to have failures. You try to prevent them but they show up here and there. We’ll get her fixed up. We’ll be back. I’m not sure when, but we’ll be back.”

Friesen was battling for the lead on lap 23 when he got a flat tire on his Halmar Racing No. 44 after contact with Brett Hearn. The tire sent him to the pits forcing him to work his way all that way back to the front. He did just that. Unfortunately, he used up his car getting back to the position before settling for third.

“I got on the outside of Brett and we got together,” said Friesen. “I don’t know if he was on defense or, I don’t think he did it on purpose. He must not have seen me on the top. I was just about clear of him when he came up and hit us. It just cut it (tire) down. We were lucky. I think Frank Cozze had a problem too. We came in and got it changed and still had 75 or 80 laps to battle back through.”

As cited above, the battle with Rudolph was great.  It was one Friesen lost as he came out on the wrong side of it at the end.

“That was battle,” commented Friesen. “I cleared him and I was just too free in the center. I was living and dying on the brown stuff on the top. By that point it was pretty much spent. I tried to get down to take his line to at least to try roll on Peter (Britten) that way. I got down there and I was worse. He rolled back around us. From there it was just getting to the finish as quick as we could.”

It was an off night for Mike Payne Racing driver Bill Decker. The team struggled for much of the evening before the feature event. Decker won his consolation event which put him in the 21st starting spot. Then Decker did what he always does, he found a way to get to the front.

“We struggled a little bit early off the trailer and I don’t know why,” mentioned Decker. “We just kept chasing it all night. We had a pretty good car in the feature. Not good enough because it seems like a lot of the guys up front came from deep. We’ll take it. We struggled tonight and still came out of here with a top five.”

38 cars hit the Sharon Speedway for the Thursday night show…

Several drivers had flat tires during the feature while running at the front including Friesen, Matt Sheppard (who was second), Larry Wight (who was third) and Tim Fuller among others…

Frank Cozze and Keith Flach both exited the race after doing significant damage to the front ends of their rides.  Cozze was in a backup car after blowing the engine in his primary car at Eldora…

Jeremy Smith was back in action after a hard crash at Eldora on Tuesday. He lost a brand new car in the crash after the water pump let go causing havoc in the front of his car. His steering locked up and he plowed hard into the outside wall. He had a backup car for Thursday. He just missed qualifying for the feature…

Thursday’s event was a nice mix of tour regulars and locals with 13 Ohio and Pennsylvania drivers taking on the invaders from New York.