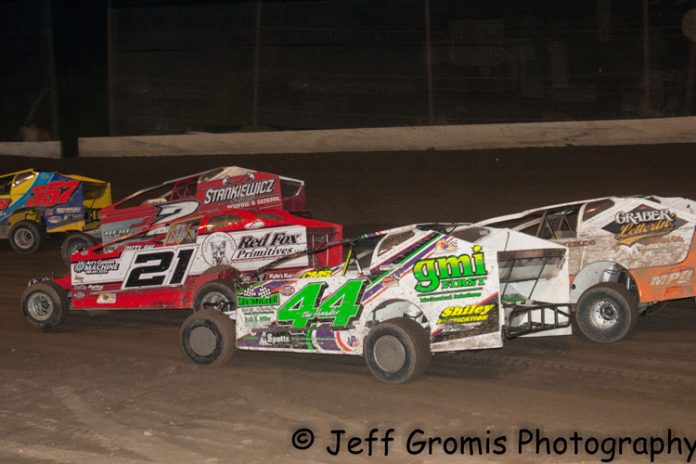 It had to be a dream to think that we would get in two complete weekends of racing action here on the NJ/PA as once again the weather interrupted our racing season. Although Saturday turned out to be a very nice day with all tracks getting there shows in, Friday night again was the fly in the ointment forcing Big Diamond to cancel their weekly program for what seems like the umpteenth time.

Big Diamond Speedway 7/14/17 – Rain once again forced Big Diamond promoter Jake Smulley to cancel his regular Friday night program. This man sure needs a break from the weather gods so they can finally get a string of shows concluded before the season ends on Labor Day Weekend.

This Friday the Modifieds will be off at the speedway with the ARDC Midgets taking their place along with a full card of Sportsman, Roadrunners and Outlaw Stocks. As an added bonus the Vintage cars will also be on hand for the night.

Grandview Speedway 7/15/17 – Double features were on the schedule for the modifieds on Saturday night with Jared Umbenhaurer and Doug Manmiller splitting the honors.


The first feature of the night was the make-up feature from June 24th where the Modifieds had completed one lap before the rains came washing out the remaining 29 laps.

When the race resumed on this night, it was Kenny Gilmore jumping out the to the early lead with a pack of snarling Modifieds trying to run him down. Kyle Weiss was the first car to challenge Gilmore but could not quite muster up the necessary speed to do so. While Weiss was chasing down Gilmore, the battles behind them were rough as the drivers were doing what they could to catch the leaders.

Duane Howard was on the move early and had moved up and into the top five only to be sidelined early with a broken right rear radius rod suffered after contact with another car. Manmiller and Umbenhaurer were also moving up through the field quickly looking to get to the front.

The move of the race for Umbenhaurer was on a restart when the Richland, PA driver made a strong move to go from running fifth to the runner-up spot. Once Umbenhaurer made that move, it was all up to him to see if he could catch the high flying Gilmore.

For a few laps it looked like Umbenhaurer was going to have to settle for finishing second when all of a sudden he switched his line to the extreme upper groove and found the extra speed he needed to run down Gilmore.

Lap 24 proved to be the charm for Umbenhaurer as he powered around the #7 of Gilmore to grab the lead. Once in front it was all Umbenhaurer as he sped off to a safe lead and took the checkered flag. The victory was the second of his career at Grandview and ended a long victory draught for the personable driver dating back to September of 2015. Gilmore hung on to finish second with Manmiller, Weiss and Jeff Strunk rounding out the top five.

In the regularly scheduled 30-lap feature event, Brian Houseknecht vaulted out to the lead and was pacing the field when the red flag appeared as somehow Kevin Hirthler’s #117 was sitting perched on top of the turn three boiler plate wall. Hirthler was okay after the incident suffering just a bruised elbow.

Houseknecht continued to lead as field returned to green flag action. Howard was on the move and quickly made his way into the top five only to have his charge slowed when John Willman slowed coming off of turn four forcing Howard to jam on the brakes allowing a slew of cars to get by him before the caution came out.

Just like in the first feature of the night, it was a restart that proved to be the difference maker for the winner. When the field came back to take the green after an incident involving Frank Cozze the top three cars came together causing them to slow down and that was the break Manmiller needed as he drove around all three cars to assume command of the race.

As Manmiller grabbed the lead and started to pull away, young Brett Kressley had other ideas. Kressley worked his way past Houseknecht and set his sights on Manmiller. Kressley ran down the leader and it looked it would just be a matter of time before he would take the lead but the veteran Manmiller used the lapped cars to his advantage to hold off the hard charging sophomore driver. Kressley was able to make one last ditch effort on the final lap but to no avail as “’The Handler” Manmiller took the checkered flag for the 26th time in his career at Grandview. Manmiller also became the first Saturday night repeat winner of the year.

Saturday night at Grandview Speedway will feature a regular show of 358 Modifieds, Sportsman and Late Models plus the Past Vintage Racers.

New Egypt Speedway 7/15/17 – Ryan Godown held off a hard charging Danny Bouc on the last lap to grab his second win of the season. Bouc who was not happy with a couple of calls made earlier in the night by the officials was a man on a mission and made a bold inside move going into the turn three on the last to get past Godown with a slide job but could not stop his momentum as he headed towards the fourth turn wall and Godown was able pull the crossover move to get back by him to take the win.

It was a much needed win at New Egypt for the “Ringoes Rocket” and the Atlas Paving #66 team. The team has struggled in the past few weeks. Godown is hoping Saturday’s win will get the team back on track as they try to catch Billy Pauch Jr in the race for the track title.

Godown took the lead just past the halfway mark of the race from a quick running Ryan Krachun and once in front was never challenged until Bouc’s last lap charge. Following Godown and Bouc across the line were Krachun with another strong run, David VanHorn and Kevin Vaclavicek.

This coming Saturday night the 358 Modifieds will take the night off to prepare for the “Jersey Rush VII” featuring the winged 410 Sprints. The modifieds will also be on the schedule to compete in small block vs big block main event.

Bridgeport Speedway 7/15/17 – Rick Laubach has won many feature events in his racing career but there are certain victories that will always be remembered as career milestones. For Laubach, Saturday night was one of those special wins.

For most of Laubach’s racing career he has called Bridgeport his Saturday night home, there were a couple of years there when Laubach took his talents to New Egypt Speedway but has always returned to the track he considers home.

Saturday night the man they call the “Quaker Shaker” won his 50th career big-block feature event. A milestone that shouldn’t be overlooked. Having 50 wins at the big 5/8’s mile speedway puts Laubach accomplishments right up there with the other Bridgeport greats. The win cements Laubach’s fifth place position on the all-time win list behind Bridgeport greats Jimmy Horton, Doug Hoffman, Billy Pauch and Wade Hendrickson. Although it will be hard to catch Horton and Hoffman on the all-time win list, it is very conceivable for Laubach to catch and pass both Pauch and Hendrickson to move into the third spot.

David Hunt took the lead with only two laps complete and pulled away from the field looking for his third win of the season. As Hunt stretched his lead, Laubach was working his way through the field and took the second spot a little past halfway. By this time Hunt had a significant size lead on Laubach but Laubach was not going to be denied on this night.

Laubach immediately set sail after Hunt and starting knocking off big chunks of his lead in quick fashion. By lap 20 Laubach had erased Hunt’s big lead and on the following lap Laubach drove past Hunt to assume the lead. Once in front Laubach was never challenged and pulled away from the field in the remaining four laps. Hunt finished second followed by Richie Pratt Jr, Ryan Watt and Neal Williams.

Next Saturday (July 22nd) the speedway will feature “Drive Appreaciaton Night” with a complete show of Big Block Modified, Crate/Sportsman and Outlaw Stocks

John Willman is out of the Bailey #81 at Grandview Speedway. Rumor has it that Kenny Gilmore will take over the driving chores of the #81 with Brett Gilmore taking over the #7 that Kenny has been running on Saturday nights…

Per a Facebook post on the Searock Fabrication page, Ryan Grim will no longer be driving the #17 TEO chassis that he has been running Saturday’s at Grandview. No word at this time if there will be another driver in the car this Saturday…

Mike Gular informed me that he will be driving the #44 Terry Fanascht owned car that was driven by Danny Erb before Erb suffered a heart attach a few weeks ago. Gular said they will run the car at Big Diamond Speedway for the Coalcracker 72 and maybe a couple of other shows leading up to it. Gular also said they might run the car in some other of the 358 money shows later in the year…

Speaking of Danny Erb, I had the pleasure to speak with him on Saturday night as he was wondering the pits. Erb informed me that he feels good right now after suffering his heart attack and is looking forward to hopefully getting back behind the wheel of a modified. Danny does not know when that will be and said it is out of his control and all up to his doctors at this point…

DRIVER OF THE WEEK: This week’s honor go to Jared Umbenhaurer for getting his second career win of his career Saturday night at Grandview Speedway. Umbenhaurer has been close on occasion this year and on Saturday night finally broke through the barrier to grab the big victory. Congratulations to Jared and the Miller #19 team on the triumph.