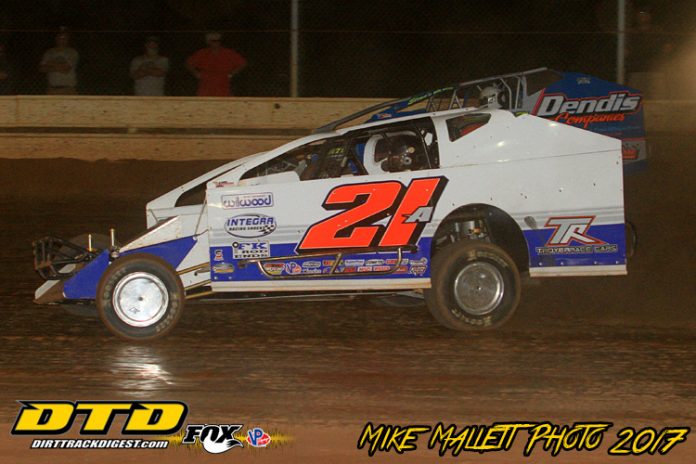 The relief in Peter Britten was obvious as he stood in the pits after winning Thursday night’s Buckeye Ground Pounder 100 at the Sharon Speedway. It was the first ever Super DIRTcar Series win for the driver originally from Brisbane, Queensland, Australia. It’s been a long time coming.

It wasn’t just a win, but a dominant performance by Britten. He started 20th, took the lead from Matt Sheppard before holding off late challenges from both Erick Rudolph and Stewart Friesen. It wasn’t a gimme on a rubbered down track, it was a win he had work for. A win he had to earn and he did just that. He drove all over the slick half-mile to work his way to the lead. He ran high, low and even through the middle. He was that good.

“It really is something, like I’ve said a few times already it’s damn near impossible to win one of these from the front row, let alone from 20th and to pass pretty much every good big-block Modified in the Northeast basically,” mentioned Britten. “You’ve got the cream of the crop on the DIRTcar Series. We passed just about everybody. To do it like that is even more unbelievable. Its feels so good to get series win. We’ve been close a few times before, but never really felt like we truly deserved to win one, but we’ve been close. This time I felt like we deserved the shit out of that one. To start that deep, the car was awesome. I could go top, bottom, middle, drive it around when it was fast, when it was slick. This Troyer car was phenomenal.”


Britten had a very successful career in Australia driving their version of dirt Modifieds. He was a championship winning driver and always a threat to win. He came to the states to compete for the first time in 2009, returning again for the summer of 2010 before hitting the road full-time in 2011 with the series. Needless to say, it was a wake-up call and he knew that there was going to be some learning that needed to be done.

“The big-block Modified racing, it’s incredible how tough it is,” said Britten. “I came over from back home winning championships and thinking I was all that. I came over here and I realized I didn’t even know how to drive basically compared to these guys. To get win among this caliber of drivers is amazing. You look at the guys that are doing well, they’ve been racing these cars 20, 30, 40 years. It takes a long time to be a good driver, to learn things. Bill (Colton) said that the first time I ever raced over here. I came over here, the first couple of races weren’t very good. He told me if I wanted to come back I had to understand that it’s a five to seven year project. Matt Sheppard didn’t win the Super DIRTcar Series championships right away. It takes time.”

As been well documented, Britten is out on the tour with his own deal for the 2017 season while running weekly at the Albany-Saratoga Speedway for car owner Andy Romano. Getting his first win, with his own team, that’s what made it even that much more satisfying for Britten.

“I like running my own team because it’s definitely satisfying on night’s like this,” commented Britten. “There are nights when it really, really, really sucks too. So it’s a tough deal, it’s about trying to build up a team. I definitely like racing for myself because you can do things your own way, the way you want to do it and the way you see fit. Maybe that isn’t the right way, but at least you are doing things the way you think you need to do them. You can’t always do that when you race for someone else, but you also have to be able to pay the bills too. It’s a tough balance, that’s why you need to get people that believe in you, believe in what you are doing and that are willing to help you whatever way you need help. That’s what Matt’s got, they don’t have a big fancy, flashy hauler. They come prepared with the car that he wants. He knows what it does and he’s got people behind him that support him whole heartedly and that’s the model that I’m trying to follow to build for myself.

Britten hopes this win helps him reach his ultimate goal of being a well-funded team that’s capable of running more than one night a week. This may be the first step in that direction.

“Like I said in Victory Lane, I’d love to thank my major sponsor, but I don’t have one,” he stated. “Hopefully this can show people that obviously I’m serious about doing this. I’ve been over here long enough and dedicated enough of my life to this. This is what I want to do, and I want to make a good career out of doing it. I just have to keep running like this. Number one to bring in some prize money, number two hopefully it will spike someone’s attention and they’ll want to get behind me and help me achieve what I want to do. I really feel like we can be dominant care in years to come. It’s just a matter of more experience and building a good team.”

When you are chased by the likes of Friesen and Rudolph, you’ve got to go in traffic. Britten did just that on Saturday. He didn’t waste time in traffic. He was beating bumpers when necessary. He also made a couple passes when the gaps opened up. At one point he made a quick move between two slower cars to make sure he stayed at the front.

“You know with them guys behind you, you don’t have time to dick around,” mentioned Britten. “That’s where I’ve lost races beforehand. The weekly races at Canandaigua, even a race at Charlotte, Brett (Hearn) got by me. You have to dispose of the lapped cars. You can’t stick behind them. If they are going to be squirrelly, all over the race track and not really give you a consistent spot to be able to pass them, unfortunately sometimes you got to give them the front bumper to get going. Like I said, all that will do is cost me a win. I’m sure none of them are out there to get in the way on purpose, just sometimes it’s the way it is. Sometimes not holding a line sometimes there might be a little contact or something. For the most part I was able to dispatch of guys pretty quickly. It’s tough, but it’s all part of racing man.”

Besides traffic, Britten was forced to deal with several restarts late with Friesen directly on his back bumper coming to the green flag. That can get anyone nervous. As Britten pointed out afterwards.

“It’s terrifying,” he said about having Friesen on his bumper. “I hadn’t seen a lot of him, then he’s in second. He was coming apparently. It’s terrifying having guys like Matt and Stew behind you. All I can do at that point is be confident in what I’ve done the whole race and keep trying to do what I had been doing. I have to be mindful of the line changing. The line definitely changed out there because it’s a 100 lapper.”

Obviously he survived to get the job done. For the first time in his career, he got to experience the high of winning a Super DIRTcar Series race. Britten wants this to lead to more highs and a lot less lows.

“It’s just an incredible feeling,” commented Britten. “There are a lot of highs and lows in racing. The problem is, the lows are so incredibly low and they hurt like hell. The highs like this are just unbelievable high. My head is in the clouds right now. Racing is so screwed up. In football one team wins, one team loses. In racing, there are 40 teams, so one team wins and 39 losers. So your odds aren’t good to start off with. It’s an incredible feeling to come out with the win. That is why the highs are so high, normally more lows than highs. Hopefully the longer my racing career goes that balance will go more toward highs and we’ll keep winning races.”

Now, for at least one day, Britten got to experience the highest of highs.