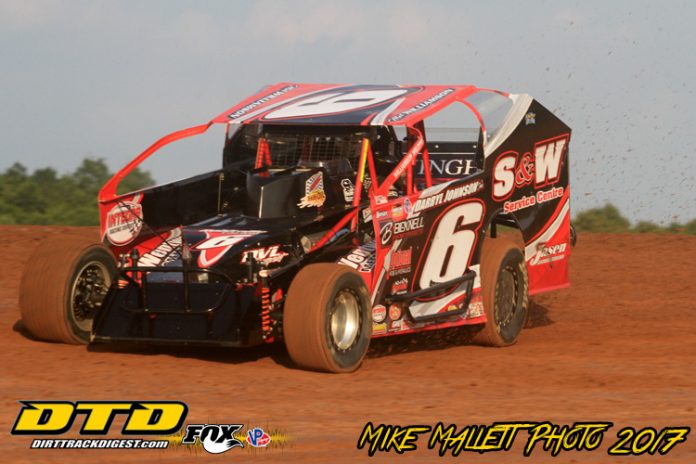 It was a long hot night for Mat Williamson.

The day didn’t start out on a high note for Williamson.  The team went to work, with some help, and ended up coming out on top for the seventh time this season at the Lernerville Speedway.  Williamson started 16th in the 17 car field, benefited from a late caution to go on to win the Modified Mania $2,000 feature by passing invader Ryan Watt.

“Everyone says we come down here and cherry pick, you pick on these guys down here,” said Williamson.  “They don’t understand that this place is tough to win at.  We’ve put some good wins together this year.  It shows you, Ryan (Watt) is a good race car driver.  He’s won series (Super DIRTcar Series/Short Track Super Series) races, big races and to beat him felt a little better than normal.”

That was the high note of the day.  It didn’t begin nearly as well.  Williamson started near the back of his heat race after a poor draw.  He was racing his way up through when the driveshaft dropped out of his No. 6m in turn three.  From there the race was on to make repairs.  Williamson and his crew thrashed.  They were joined by Watt and company as well to make the necessary fixes to get him ready for the feature event.  He’d go on to pass Watt on lap 23 to take the win in the 30-lap feature.


“I was driving down the back straightaway and I felt something go south,” commented Williamson.  “I didn’t know if it was motor or the driveshaft.  I got it in the pits, the guys worked their tails off.  We had to earn this one tonight.  I don’t think I’ve worked that hard in this heat before.  I think I sweated like I was in a sauna.  When you start in the back here, there is always good competition, but with the addition of Ryan, when he got out in front I didn’t think we had a shot.”

The team was able to replace the driveshaft but didn’t have time to make the necessary repairs to the torque arms which were bent.  It didn’t seem to matter as Williamson powered his way forward working around the top lane of the speedway.

“We had a pretty good car, all things considered,” cited Williamson.  “Everything was bent.  When we were under there checking out the driveshaft out I made sure the floor moved, everything moved smoothly and was not bound up. It seemed alright.  We are certainly going to have to get her home and pull the rear-end out, change torque arms and give her some love this week.”

He got to Watt fairly quick, but It wasn’t easy pass to make.  Watt has his No. 14w rolling good on the high-side of the speedway.  Williamson showed him the nose on the bottom multiple times.  Eventually Watt got to traffic, he tried the bottom which opened the way for Williamson to go by on the outside.

“The lapped cars, we race with them every week so you kind of know what they are going to do and where they are going to go,” he said.  “I knew when we got racing lapped traffic I thought I was a little bit freer.  My car was a little bit easier to drive than his was.  Until we caught the lapped traffic I didn’t think I’d have a chance to pass him.  With the top being so dominant like that.  Danny Johnson taught me a few years ago when I was really young.  We had a good race car.  We were leading the race and we got into lapped traffic.  Danny wasn’t any better than I was, just a lot more experience.  He poked the nose on the bottom a few times and baited me down there.  I moved down and then I saw him drive around me for the win.   It’s little stuff like that teaches me to be a better driver.  We might have used a little bit of that tonight.  I showed Ryan the nose on the bottom and then we were able to drive around him.”

The win gives Williamson a little positive momentum as he heads home from a tough trip to Eldora Speedway and Sharon Speedway.  The team didn’t have the results they were hoping for when they headed west to the Buckeye state.

“It was a little bit of a disappointment this week at Eldora (Speedway) and Sharon (Speedway),” mentioned Williamson.  “We couldn’t really put anything together to find speed in the feature.  We were good all night but we struggled late in the race, later in the night feature time.  It’s a nice rebound to come back here and win, but man I didn’t think it was possible tonight.”

One hiccup.  That was all it took on Friday night for Watt to lose the lead to Williamson.  Watt had been working the top but when he got to traffic he elected to go down to the bottom of the speedway.  By giving up the top groove, that opened the door for Williamson to drive around him for the lead.

“Mat was really good on the bottom there and I saw him coming on the bottom so I tried rolling the bottom to get that lapped car,” stated Watt.  “I really didn’t run down there.  I ran there the beginning of the race, but I was really smooth on the top there.  When I went down there the car jumped on me a little and hopped and I couldn’t get through holes down there down real good.  It wasn’t as smooth as it needed to be.  I needed to move back up.  By then Mat had already slipped by.  I don’t know.  If we wouldn’t have gotten that caution about halfway, he was a ways back there, we might have been good.  Hey, what can you do, he’s won a lot here and knows his way around.”

Although a spot short, Watt was happy he took the opportunity to race at Lernerville.

“It was a lot of fun,” he said.  “In the heat race and warm-ups it was hammer down.  You didn’t lift for eight laps.  It was fast.  The track got racey there in the feature. That was cool.  I’m happy to come here and finish out with a second my first time here.” Garrett Krummert had been in a funk.  Things weren’t going the way the Ellwood City, Pa., driver wanted so he and his team decided to make a change from the Troyer car they had been running to a new Bicknell car.  So far so good.

“We were just struggling,” stated Krummert after his third place finish Friday night.  “The last month I’ve been terrible.  I just couldn’t get it going.  Nothing against Troyer, it might have been me, I just don’t know.  We needed something fresh.  Matter of fact, I called and Randy (Williamson) actually called me back on a Sunday.  If he is willing to talk to a guy that might not even buy a car on a Sunday, I got to spend my money there.  So far he’s been awesome.”

Krummert admits he’s still getting acclimated to the car as it is a bit different from what he’s used to at this point.  So far, through two races, he’s been on the podium both times out.  He won at Pittsburg Pennsylvania Motor Speedway before his third on Friday with some help from the folks at Bicknell.

“The hardest thing for me is the rubber floor,” mentioned Krummert.  “Everything I had was a solid floor.  I get in this thing the floor’s moving, gas pedal foot is moving, the brakes foots moving and it makes all kinds of nose.  It’s definitely different for a guy that only ran solid floors.  Randy’s (Williamson) has been awesome.  Any time I call Randy or text Randy his adjustments are right on the money.”

Friday, Krummert might have had a better run had he not had the misfortune of starting on the bottom.  The race was slowed by multiple cautions and it seemed like every time Krummert was in low lane for the green.  He lost a couple spots but rallied late to get back to third.

“We didn’t have much of a break,” he said.  “It’s tough starting on the bottom.  Every damn restart they put me on the bottom so that was tough.  To get third was good”

Brian Swartzlander debuted a brand new Teo Pro Car on Friday evening.  Swartzlander started on the front row of the feature, jumped to the lead before pulling off with smoke billowing out of his No. 83…

Shawn Fleeger had a tough night.  Fleeger had mechanical issues in his heat race that caused the car to stop then he had issues again in the feature as his car came up lame on the top side of turn two.  He needed a push to the pits…