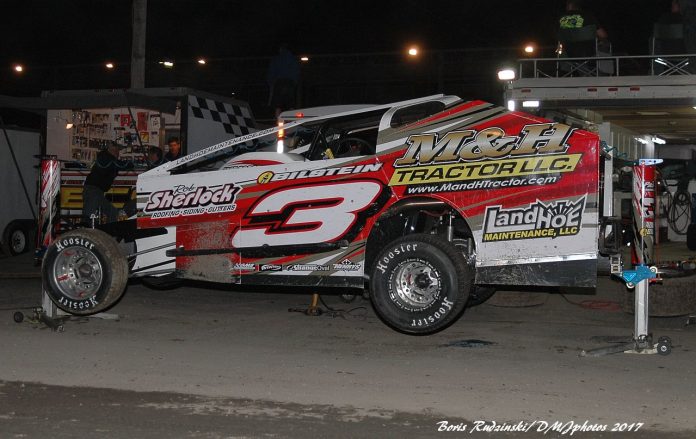 MIDDLETOWN, NY- Starting the year off in the Pascual racing Landhoe Maintenance, Sherlock Roofing car was Anthony Perrego. Perrego and Tyler were the two drivers who were going to be offered a ride in the potent Pascual racing big-block over the winter. Based on Anthony Perrego taking a top finish in the Eastern States 200 in this car, Perrego was chosen as the driver of the car for the 2017 season at Orange County.

However as the summer started the season the Pascual racing team engine department decided to go on vacation not once but twice with terminal engine failures. The team utilized Precision engines out of Middletown, N.Y.

During the time while the team tried to get their engine program rebuilt, Perrego was racing in the 358 ranks at Grandview on Saturday nights. As a professional race car driver who makes his living from racing, Perrego has decided to leave the Pascual racing team under strained terms.

Danny Tyler now is the new driver of the Pascual racing 3 big-block and hopes to be their for years to come.


Tyler is a regular campaigner at Accord Speedway aboard the Chiefs Excavating, Precision powered entry. Working on a shoe string budget and leading the points at Accord, Tyler is getting his feet wet in a very competitive big-block entry at Orange County.

“I didn’t get bent out of shape or make a scene or say bad things when this ride didn’t develop the first time. I just said to myself okay maybe its just not the right time and maybe someday in the future Ill get a call from someone who sees how hard I work and how I race and how I treat the equipment,” said Tyler. “I know what its like to race on your own budget. I’ve raced my family’s equipment for all of my career so I know what its like to have to buy parts and maintain equipment. When someone calls you up and offers you this kind of a ride and says I’ll spend a $1000 dollars on you tonight it humbles you.”

Tyler went on to add, “A few years ago I raced here in the Deyo open show and finished in the top five so I know I can get around here but this is a top shelf big-block and I don’t really have a lot of big-block experience so some seat time will help”.

Additionally Tyler went on to add, “I am not proud of the effort I put in tonight. You know its your first night in the car and you want to do well. I put a lot of pressure on myself to do well. I want to show these people that they made the right choice in putting me in the car. We had a torque arm fall off the rear end in the feature and by the time we could get back here to fix it and then rejoin the field it was going to be a moot point. I was rolling pretty good from 21st and was passing cars on the outside and then it all came apart”.

Calling the metropolis of Cottekill, N.Y., home, Tyler is known as a real down to earth family oriented driver who is easy on equipment according to several drivers who have raced with or has known Tyler. It is expected that Tyler will run the Pascual car this Thursday at Rolling Wheels in a 50-lap, $7,500 to win special. It also expected that Tyler will be in the car for the rest of the 2017 season including the coveted Eastern States 200.