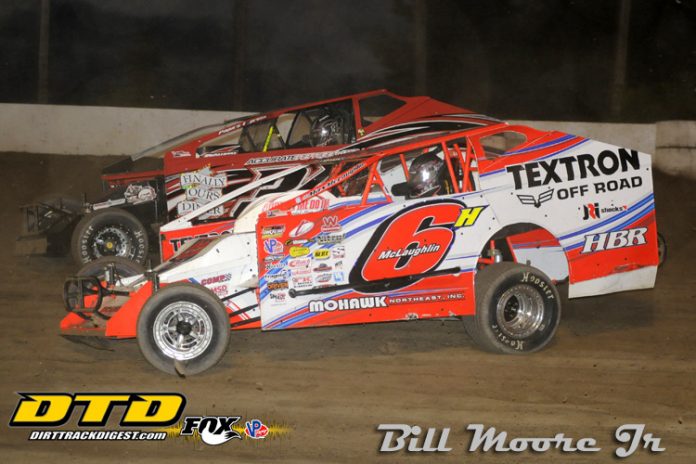 It is difficult enough to compete regularly on the big-block Modified circuit as the effort is intense. However, once in a while rumor or gossip can sneak up on you.

Recently, in another racing publication a columnist mentioned that rumors were circulating Max McLaughlin would be heading back to his home in Mooresville, N.C., in 2018 and that Sportsman hot shoe Ronnie Davis III could be behind the wheel of the HBR Mod next year.

Mike McLaughlin, a veteran of the Central New York Modified and Supermodified scene, had a stellar career in NASCAR and has been assisting the efforts of his 17-year-old son and said of the rumor, “It’s news to me. We are where we want to be.”


However, as far as Mike is concerned there is a desire to remain racing in the Mods next year.

He said, “It is not easy. Max is getting better and he is learning from running against the guys up here. I am happy with his progress.”

With a smile Mike said, “He could get wiser, but he is definitely not afraid to fill a hole out there. He’s picking those holes better now.”

Just this past week at Eldora, Mike said, “He started 17th and finished fourth. He had fun bouncing off the walls. In fact I think he bounced off them more this year than last. But he moved forward.”

The McLaughlin’s and Heinke got together in a way that Mike really isn’t sure. He explained, “I got to know Al through different people around racing. Al has been heavily involved all over the place and helps a lot of people. I think he was looking for a younger driver and so Max is here.”

The senior McLaughlin is involved in fabrication in the HBR shop.

In regards to Ron Davis III sliding behind an HBR wheel next year, Ron’s dad said, “I don’t know anything about that. The only deal we have outside of the Sportsman at this point is for Joe Abass with his small-block.  I don’t know where that will go next year.”

During the past winter is appeared there was some hope of assistance in procuring a big-block for the 32R team, but it never materialized.

Ron said they thought they were close, but “I don’t believe anything until it actually happens.”

So for now the Davis father-son combination will continue to ply the Sportsman race schedule and hit the bigger small-block shows at the end of the season.

There is always that hope that a big-block will materialize.