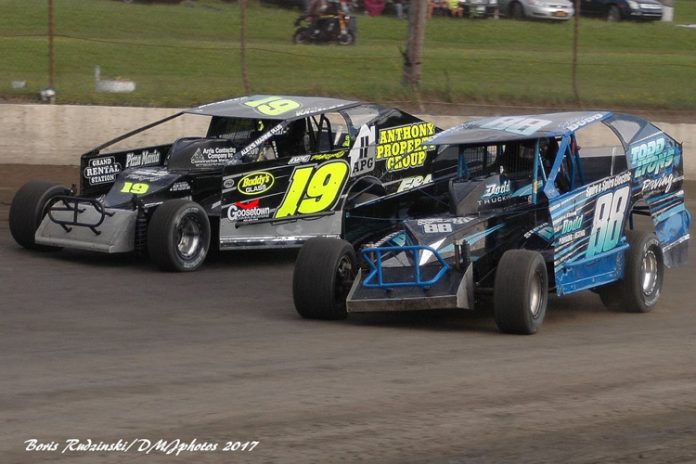 MIDDLETOWN, NY – 28-year-old rookie pilot Tyler McKee is trying to cut his own teeth in the ultra competitive big-block Modified division at Orange County weekly but when your the son of a legend you have huge shoes to fill. McKee wants to fill his own shoes while honoring the legend that is his dad Chuck Mckee.

While Modified racing consumes his weekends, you’ll find Tyler during the week working for Central Hudson and Gas. McKee is sponsored this year by J Anthony Property Group with additional sponsorship coming from FA Concrete and Buddys Glass and Goosetown Communications.

“When I first started with the big-block this year, I was feeling a lot of pressure. A lot of people were comparing me to my dad but as the weeks have gone on I’ve put that aside and just focused on me. My dad was great but I am me and he his him”.

McKee went on to add about the weekly grind at Middletown. “When you unload here every week and you take a moment to look around you see the superb field we have here. Meier, Horton, Higbie they are all just great racers , they unload ready to go.”


While last week was a career high, it could’ve been a slightly better finish for the rookie big-block pilot. “We had a late restart and I just didn’t get going.  I might have spun the tires or was just late to the gas then Horton got me and a couple of others, but we were able to get back to fourth”.

In his seventh year of racing, McKee was quick to thank his former car owner Phil Perricelli, who passed away in May of 2016. “Phil gave me my first big chance at racing. He was a great guy and great car owner. I owe a lot to him,” said McKee.

While McKee is only running weekly at Orange County, if the time permits or if there is an opportunity he would like to travel a bit. “ Id like to go to Lebanon Valley or try entering the Series race at Fonda in September but we will see how it shakes out.”

Entering Saturday night, McKee was 21st in points. Disappointing on the outside but on the inside McKee is getting his weekly teeth cutting sessions in by learning how to handle a big-block and how to make the right adjustments that will get him back to the front for another finish and hopefully a win soon. The sands of time stop for no one but if this second generation driver can get the seat time he needs he will surely be the next “Missile” at “The House of Power.”