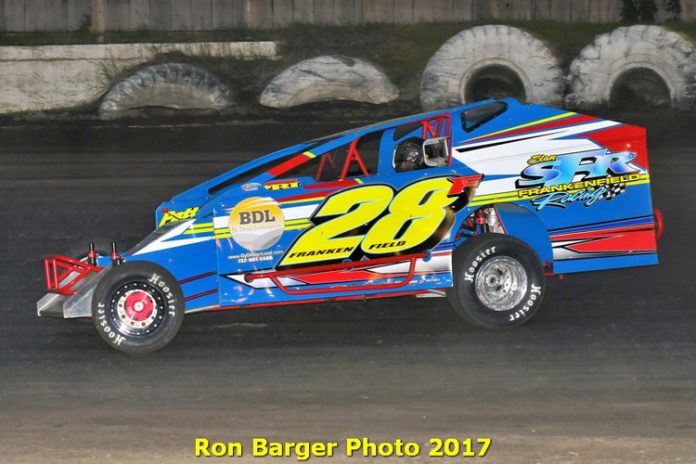 MIDDLETOWN, NY – Saturday night a virtual unknown in big-block Modified racing sat on the outside pole for the 30-lap feature event and went on to score his first win of 2017 in virtually a black hole.

Looking at the internet racing forums on Sunday, people were asking who is Stan Frankenfield and where did he come from ? Well, I am in that same boat. I even asked several colleagues of mine who are at the track and they paused and said not sure either. So using the power of social media, I got in touch with Stan on Sunday via phone and I got the low down on the “virtual unknown” modified pilot.

A journey as a big block Modified driver started in 2002 when Stan started driving at New Egypt Speedway in the Sportsman ranks. After a short period of time, Stan went to college in the south and for two years he didn’t race a car. Upon returning home, his dad had a 339 cubic inch motor and asked his son if he wanted to go racing small-blocks at Bridgeport on Friday nights.

So in 2006, Stan Frankenfield joined the ranks of the small-block Modified drivers at Bridgeport on Friday nights. In 2007, Stan went north to Five Mile Point to continue racing in the 358 ranks. Spending two years at The Point, then he went back to Bridgeport for 2009.


In 2010, Stan found himself at Orange County in a big-block but lasted only a few weeks after the team went through a series of engines and crashes.

From 2011 to 2015, Frankenfield raced again at Bridgeport in the big-block ranks. In 2016 the team wanted to see where it stood so they got some assistance from noted promoter and owner of Lebanon Valley Speedway and went to the Valley of Speed for a season. The team quickly found out that they were underfunded and under powered and well out of their league.

In 2017, Stan finds himself once again at Middletown where he’s remained in relative obscurity.

“I think the teams and officials like to treat me as an outsider.  I’m okay with that. I’m not there to make friends per se, I am there to win” said Frankenfield.  “I’m not looking to make enemies. But I don’t like when guys wreck you on purpose or run you unreasonably hard. I like Middletown because you have to be on top of your game. Your car has to be fast, has to pivot and handle through the turns, you have to have all things go right from the heat to the feature,” added Frankenfield.

The 33-year-old fleet mechanic is happy to call Middletown home for 2017 and hopes to be there again in 2018.

“My program is pretty good. I got a couple of Bicknell cars and I have a Chuck Ceci powerplant (C&C Performance) and the motor I won with on Saturday is a 10 plus year old motor with a fresh bottom end that we bought the parts for, had the block and heads machined and we assembled it ourselves. My dad is the owner of the car but in reality its a family thing. My dad is my biggest cheerleader but he’s also my #1 critique. He tells me when I am sucking or what I should’ve done better here and there. I think every team needs a cheerleader like that. Someone who wont sugar coat things.

“Id like to travel more with the big-block. I feel my stuff is pretty good but its a lack of crew help because they all have regular jobs and cant get time off to chase races. Our plan is to run the rest of the year at Middletown, run the Eastern States 200 and run the full season again in 2018 at Middletown. Although, if someone offered me a ride for somewhere else or a small block ride and it was something that was good, I would take it. I don’t take a salary from the car I drive now. Any monies we get goes right back into the car. I work a full time job during the week that provides the income that pays my bills and allows me to race”.

On what if anything special he did to win the 30-lap feature at Orange County, Frankenfield went on to add,

“Once I got in the lead I was just cruising. On that lap nine restart the carb loaded up and it wouldn’t go. I’m sure that a few of the drivers in the pack weren’t happy with that. Maybe they thought I was playing games or something. I’ve been there many times in my career where the leader doesn’t go and you get jostled all around.”.

Frankenfield continued, “We blistered the right rear tire to the point where it chunked out. I don’t think there was one or two more laps in the tire. We usually run tires in the heat for three weeks and then toss them out. We usually use new rubber or maybe use a heat tire for the feature if its good but lately the track has just been eating tires like no tomorrow. You need new rubber for the feature. So basically this win Saturday will pay for new tires and some fuel. I think we learned a few things and I believe we can be a top five car again and possibly score another win this year. Its hard to come from the back. Other than Meier coming from 17th a few weeks ago you need to be up front.You get maybe three or four laps in the feature before it becomes one lane and follow the leader. Same thing in the heat race.”