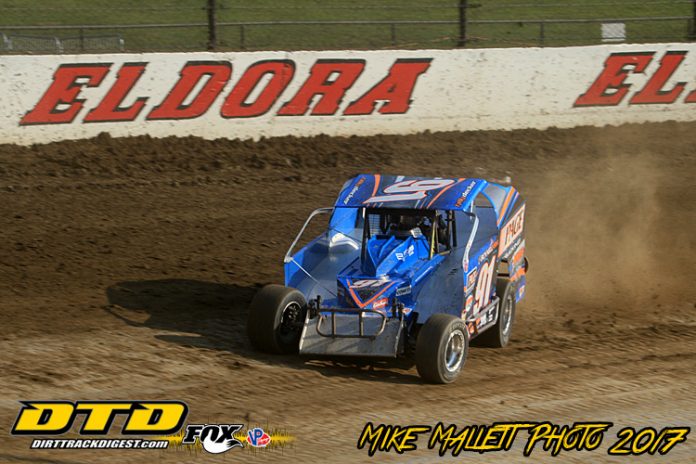 Friday was a beautiful summer evening without any threat of rain. As Brewerton’s pits filled with cars the grandstands packed out really well. The demo derby may have attracted people who may never have seen a dirt track race, and that’s a good thing because the racing was pretty good all night. I’m hoping that the little tikes that came out to see the carnage of the demo derby caught the racing bug and pester their parents to keep bringing them back.

Ray Bechler outran everyone else in the Four-Cylinder Stock class to win the first feature of the night. The Mod Lite feature is right up there every week as one of the best races on the card, and last Friday was no exception. Jason Meyers was able to win the tight race for the lead and hold on for the win. It’s always great to see a first time winner with some excitement and the ability to give his sponsors credit for their help. Jason was elated but professional in his interview.

Next up were the mighty Modifieds. Billy Decker was hot off the Super DIRTcar Series tour after winning at Eldora Speedway. He shared those laurels with another Billy. Billy Whittaker, or “Part Timer” as he’s known, won the invitational 20-lap feature at Eldora last Tuesday. He still couldn’t believe it when I saw him Friday.

Billy Decker started mid-pack in the 35 lap feature at Brewerton and used years of experience the race to the front for his 69th feature win at the D Shaped Dirt Demon. Todd Root grabbed another win in the hotly contested Sportsman feature. Do to an early morning meeting Saturday I made my way home before the demo derbies to beat the traffic.


I was loading some things into my car Saturday when I got the message that Fulton cancelled. After a short dinner date with my wife I got some devastating news. It’s unfortunate when a driver is injured in a race car, and especially scary when fire is involved. For that reason, without knowing the full details, I’m asking everyone to lift Mike Humphrey up in prayer. His Microsprint went up in flames at Paradise Speedway. He, and two people who rushed in to help him all suffered burns. Mike was airlifted to Strong Memorial in Rochester and was stabilized.

A statement by his wife Sunday morning said he had sustained 3rd degree burns on 60% of his body, and was stable while being kept in guarded condition. That’s a normal precautionary procedure to monitor the burns for infection. Until we know more we won’t know exactly how to pray, but the Holy Spirit knows what Mike and his wife need. He will honor our collective faith in His ability to deliver what they need, spirit, soul, and body, as we join our faith together.

“For then I will restore to the peoples a pure language, That they all may call on the name of the Lord , To serve Him with one accord. Zephaniah 3:9 NKJV”

I need to explain what I mean by joining our faith together. There is a prayer called the prayer of agreement. This happens when two or more believers pray for God to do something they have agreed upon, uniting their faith for that purpose. Jesus taught this when He said:

As we stand united in faith we will see Father acting on our request, just as Jesus promised. When He mentioned binding and loosing things He was talking about exercising spiritual authority over things. That works over our circumstances just as much as over spiritual forces that work against us, or for us, such as demons and angels.

Just before His ascension Jesus gave a greater promise with a mandate to perform it. Listen to what He told the forefathers of the church age.

“And these signs will follow those who believe: In My name they will cast out demons; they will speak with new tongues; they will take up serpents; and if they drink anything deadly, it will by no means hurt them; they will lay hands on the sick, and they will recover.”
Mark 16:17‭-‬18 NKJV”

These things were spoken as a commission to the Church, not just church leaders. Notice he said “these signs will follow those who believe”… His name holds all authority over everything in Heaven, on earth, and beneath the earth. Speaking by faith in His promises engages Holy Spirit to perform His Word. Proclaiming the authority of His name invokes the same authority as the One who bears that name. This is for the Church, for every believer, not just a select few.

How could I possibly say this? I didn’t, Jesus Christ did. I’m only choosing to believe Him, and taking Him at His Word. If He said it, that settles it forever in my heart.

How can I be so confident in this? Experience. I’ve seen or experienced these things first hand. My confidence is rooted in the promise at the end of Mark’s Gospel, which confirms Jesus Christ’s involvement in the success of our Christian walk, not just in word, but in action. It says that after they heard Him say these things “Then the disciples went out and preached everywhere, and the Lord worked with them and confirmed his word by the signs that accompanied it.
Mark 16:20 NIV”

I’m confident that when we join our faith together in prayer based on His Word, collectively we can change circunstances, send the enemy fleeing, and stand in awe at what God does in response to our faith. He never changes.

Jesus Christ is the same yesterday and today and forever. Hebrews 13:8 NIV

We’re always available for anything you may need. Just email us at flchaplain@windstream.net or inbox us at Finish Line Chaplain on Facebook.