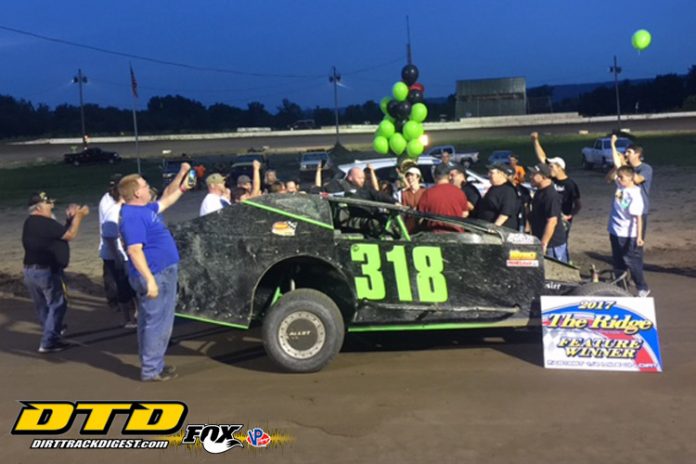 Our racing this past weekend included Albany-Saratoga on Friday where two Modified features were part of the program, one rescheduled from an earlier season rainout. Kenny Tremont was the winner of the first and Jeremy Wilder was the winner of the second. Dave Constantino won the Sportsman event and picked up the extra money put up by Mike Sowle. Limited Sportsman winner was Dan Grignon, the DIRTcar Pro Stock series event went Rob Yetman, Randy Mills was the Street Stock winner and Four Cylinder winners were Will Ryan and Ben Grant. We spoke with Elmo Reckner and Pastor Ed Harkins who were conversing near the pit shack. We asked Elmo if after the problems he had had the past two weeks, if he was asking for a little help from above. His answer, “we have two features tonight and if it works, I’ll be talking with Pastor Ed every week.” Spoke with both of them about running Albany-Saratoga compared to Lebanon Valley and both agreed you need brakes at a small track and a lot of horse power at Lebanon. Some of you may remember Ed Harkins when he raced in the Sportsman division in the past so he certainly knows what is needed to be successful at both venues. Elmo also runs both tracks and knows there is a big difference. After the first of the two Modified features we spoke with Elmo who had finished second to Tremont and told him he may need a little longer prayer next week. On the way into the pit gate I spotted the Four Cylinder car of P. J. Bleau, the No. 92d. P. J.’s team is one team that always puts out information, starting spots and finishes, each week by way of Facebook as to how the team is doing and we commend them for that. P. J. says it’s his crew that deserves the credit for the information that goes out each time he races. So far this season P. J. has won at all four Capital District tracks; two wins at Albany Saratoga, Glen Ridge and Lebanon Valley and three at Fonda. P. J.’s wife Amber is his most enthusiastic cheerleader when he is out on the track and P. J. says he enjoys the Four Cylinder class. His father raced mini stocks back in the 1990’s and said he stopped racing when P. J. was born in 1991, so he missed seeing any of his dad’s racing.

We received emails asking about the John Grady Birthday Party and Vintage Photo Night at Albany-Saratoga and here’s the scoop, the event has been rescheduled for Friday August, 25th so mark your calendars. Look for a commemorative Grady tee shirt also. The Mohawk Vintage Mods are also on the card. Another special night at the Great Race Place is this Friday Stan Da Man 32 night in memory of Stan Devore. 32 laps for each feature, paying $3200 to the winner of the Modifieds, $32 for each lap and Grady Vintage Photos is paying $320 to the winner of the Modified heats.


Fonda cancelled their racing this past Saturday leaving fans to look forward this Saturday to the Hall of Fame inductions, 4:30 p.m. at the Fonda Museum on the fairgrounds. There is a bevy of inductees on the agenda making for an exciting night at the museum for the Fonda Faithful. Drivers to be inducted are Jerry Cook, Earl Mewhorter. Jim Luke, John Constantino, John Kollar and Keith Tesiero, Sr. Car owners being honored, Jim Magielda, Jake Spraker and R. C.Putnam. Track Personnel, Clancy Miller, Track contributor, Warren Roosevelt, Sr., the Bill Fake Track Pioneer award will go to Frank Trinkaus, and the 2nd Annual Bruce Dostal Dedication to Fonda Speedway Museum Awards will be announced that night.

At Glen Ridge on Sunday the Street Stock class ran for extra money, $300 to the winner of the Street Stock Challenge, Brian Cosselman, Crate Modified winner was Tim Hartman, Jr., Limited Sportsman Dave Richer, Pro Stocks, Nick Stone and Four Cylinders, Andy Graves.
Dave Richer came back this week determined to win the Limited Sportsman feature in memory of his father, Ed who lost his life last Sunday at Glen Ridge when he was stricken and succumbed to a heart attack in the pits at the end of the evening. Dave was able to win the feature and celebrated an emotional win for the entire crowd of fans on Sunday at The Ridge. Also in a special ceremony Nick Stone and Jeremy Miller were honored with plaques for trying to save Ed Richer during his distress last Sunday. We send our condolences to the Richer family.

This Sunday, July 30th, Glen Ridge will not be racing, they have a week off. They will return August 6th with Fan Appreciation Night.