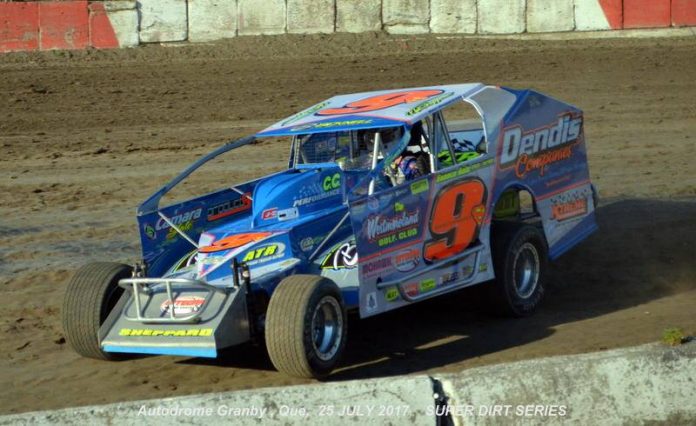 For the second year in a row, Matt Sheppard walked out of Autodrome Granby with a Super DIRTcar Series victory. The reigning SDS champion got it done passing Brett Hearn and by holding off the challenges of Pat Ward while on his way to the $6,000 win.

“I always enjoy coming up here,” Sheppard said about Granby. “I’ve had a lot of success here throughout the years. It’s nice when you got a good car under you. It wasn’t for lack of effort. We really weren’t happy with the car after the heat, did a whole lot of work to it for the feature and I didn’t know what we were going to have, but it responded nicely.”

It was Sheppard’s first win on the tour since early July at the Five Mile Point Speedway after a flat tire negated his chances last Thursday at Sharon Speedway.  He was in a battle with Peter Britten when the tire went south. He hasn’t struggled on the weekend, it just seemed he’s had some tough luck leading into the event on Tuesday in Quebec.

“We really never stopped running good,” mentioned Sheppard. “We never stopped winning on the weekends. We showed a lot of speed at Eldora. Then at Sharon we got a flat tire. We are back on top again tonight. It feels good. I can’t say enough about this car. It’s been fast all year long. Everywhere we’ve brought it. I don’t know if we’ve had a bad run yet this year with it.”


Sheppard almost gave the lead away late. The Waterloo, N.Y., driver blasted his Bicknell into turn one and went over the cushion. He drove across the corner to just beat Ward off the turn.

“I got way, way out,” stated Sheppard. “I was higher than I should have been into one and I saw Pat up under me. I was like man, get going here you dummy. I got a good run off of two and I was able to hold on until the end.”

Ward recently debuted a new car which has been on point. The Genoa, N.Y., driver has run the piece three times this season and he has nothing but second place finishes. He’s definitely on the cusp for a win.

Ward talked about the opening Sheppard gave him. He was gaining ground as they got to traffic. He was there when Sheppard miscued and missed the lane on the top of the speedway. He had an opening but backed off to avoid any contact.

“I kept thinking I was little better than him if I can just hit my line right,” commented Ward about the battle with Sheppard. “He went way too high. I thought we were going to have a bad collision when he came back down, but I kind of eased out of it so we didn’t wreck.”

As Ward was driving back to the pits his car ran out of fuel. He wasn’t the only driver to have the issue as Brett Hearn, who finished third, reported a similar fate as he crossed the scales. Ward indicated the track was ‘hammer down.’ He was constantly on the throttle.

Hearn Lucky to Make it to Finish

Ward ran out of fuel after Victory Lane, Hearn wasn’t as lucky. Hearn ran out of fuel as his car crossed the scales allowing him to barely make the necessary weight to keep his finish. Luckily the car weighed just enough.

“I’m very lucky in a lot of respects,” said Hearn. “I was two pounds overweight. Close, way too close. We were full, but something is up with the carburetor or something, but it didn’t run good the whole race. It was kind of blowing some flames. Something is gone amiss a little bit, but it shouldn’t have used that much fuel. We’ll fix it tomorrow.”

Hearn also had right rear tire that was going down. The tire was severely worn at the conclusion of the race. Luckily everything worked out for him to finish third after leading some laps in the first half of the race.

“We dodged a huge bullet,” he stated. “One of these times we are going to stay up in front for 100 laps. We can get there, we just can’t stay there.”

The streak stayed alive on Tuesday for Australian Peter Britten. The team has been clicking on all cylinders as of late and it was no different at Granby. Britten started the race from the seventh spot, stayed consistent throughout allowing him to come home in fourth.

“That’s four top five’s in a row,” mentioned a happy Britten. “We got some good momentum on our side right now. Ever since we debuted this new Troyer we’ve been really strong. It’s a new C.C. (C.C.Performance) motor as well. It’s amazing what a little bit of fresh equipment can do. It’s great, even tonight, this place is hard to setup for. It’s such a different place. I wouldn’t say we had a great car out there. It was still drivable and able to maintain a top five finish. That’s says something when your car is off and you can still finish up front. Like I said, we got the momentum on our side and we need to keep going.”

The current trend for Britten is one of the best of his racing career in the States. He’s going to do all he can to keep riding the wave.

“We are all pretty pumped up,” he said. “Like I said, same old little team doing what we can. This definitely helps. Motivation, prize money, it keeps us going. We’re not backing down and we’ll keep going after it.”

It’s been a wild series of ups and downs for Keith Flach. Flach has had good runs and wins while also having his fair share of tough luck. Tuesday was no different for the Ravena, N.Y., driver as he felt the lowest of lows when he got the wall during his time trial lap.

“This whole week and a half has been so up and down, it’s like a rollercoaster,” stated Flach. “Earlier today we had some problems with the carburetor or something. It wasn’t running right so I overdrove it in time trials. It was my screw up. We got into the fence and folded up the frontend a little bit. We had to change that, then struggled all night. I got to thank the two guys I got here, Andrew (Phillips) and Jim (Osgood). We kept digging and got her back together. We kept trying to work on the chassis.”

He missed out on qualifying through the heat, then missed again in the consolation before taking a provisional to start the main-event. He used that provisional to end up ninth at the end of the 100-lap feature. He was back on top of the high point of the rollercoaster.

“We started at the back of the heat and didn’t qualify,” commented Flach. “We worked on the chassis some more and went out for the B-Main and still didn’t qualify. We just kept digging at it trying to get the chassis where it needed to be. Luckily things panned out in the feature. We were able to make some moves early, kind of bide our time. Once it funneled out we were able to work up to ninth. It was a good night.”

36 cars rolled through the gates at Autodrome Granby. Steve Bernard earned his first ever fast time award while also winning his first heat race of 2017. Max McLaughlin, Larry Wight and Jimmy Phelps were also winners in their respective heats. Consolation wins were taken by Yan Bussiere and Kevin Hamel…

Brandon Walters night ended before a lap was complete. Contact with another car sent his No. 22 hard into the backstretch wall…

It wasn’t a great 34th birthday for Stewart Friesen as he dropped out early with electrical issues. He was credited with a 30th place finish…

Bernard’s day came to a halt as he was running inside the top five. Bernard’s No. 54 billowed heavy smoke as he came down the frontstretch on lap 39. He got assistance to get back to the pits.