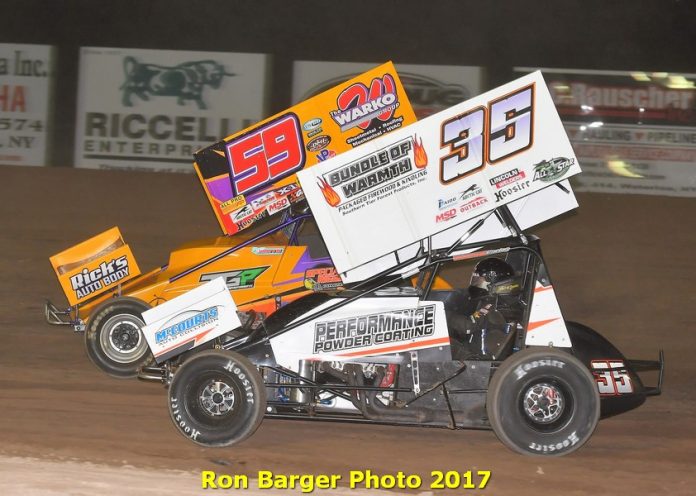 It took until Friday night at the Outlaw Speedway for Ryan Smith to claim his first All Star Circuit of Champions series win of the season. The Pennsylvania native came into the night second in the point standings behind Chad Kemenah but lacking in the wins department. Friday he finally broke through in the 30-lap main-event in the series first ever visit to the Dundee, N.Y., facility.

“This is pretty awesome,” stated Smith. “We’ve been working our butts off here and getting faster, faster and faster. We couldn’t get it all done, couldn’t seal the deal. This is pretty cool for all our guys. I got two owners, a bunch of little sponsors that all make this deal happen and to finally to get the win out of the way is badass.”

Smith had a fast car all night long as he placed near the top of the speed charts in qualifying. He then went on to win his heat race event as well as the dash. Instead of making changes for the feature, Smith elected to leave the car be and it was the right call. It was a lesson he learned less than a week ago at PPMS.

“We were good in the dash, I was good in the dash last week at Pittsburgh (Pittsburgh Pennsylvania Motor Speedway) and changed some things a little bit for the feature,” he mentioned. “Tonight I didn’t touch a thing. We put the other tire back on, I ran same left rear in dash, put fuel in it and that’s it. I left it alone.”


Sammy Swindell got the jump on Smith at the green. Swindell paced the opening circuits with traffic become an issue right from the get-go. By lap five Smith and Swindell were bunched together in the thick of slower cars battling at the back of the field. Smith hung with Swindell using the traffic to his advantage. Swindell made a mistake and Smith slipped by for the lead. Swindell then got the lead back from him before Smith regrouped and passed him a second time for the top spot.

“It was really good, but I got beat on the start,” commented Smith. “The motor really wasn’t running right. It had a miss to it. We detuned it for the slick. It was going to cost me somewhere else. I was good on the top there for a while and I figured it was going to go away. By the time it did, I didn’t get to the bottom and he went back by me. We just raced our butts off there in traffic. I snuck back under them. There was such a fine line.”

He continued, “One mistake he was back by me, we were racing hard. Lapped cars were everywhere, but that’s what made it a race. I think I could have ran Sammy down in clean air. Could I have passed him? I don’t know. I kind of caught him at the wrong spot and that’s how I got him. Then he got me back. It was just a great race. To be out on top is awesome.”

The closest Smith came to giving it away was on a late race restart. The caution came out on lap 28 as Max Stambaugh spun over the banking turns three and four. On the next green, Smith missed it going into turns one and two allowing Swindell to drive right by. Fortunately, Joe Kubiniec spun in turn three negating the green. Smith wasn’t going to be beat on the second attempt.

“I could see the white flag waving so I didn’t want to see a yellow,” said Smith. “I got the three lapped cars in one corner and I thought that would be enough to give me some breathing room then the yellow came out,” explained Smith. “Then the restart, I don’t know, luckily I had another yellow. Sammy would have got me. I thought the middle would come back there. We were putting around on it, cleaning it off. The air pressure was going back down and I thought he might be able to roll around me. I run it a little harder on the second restart. I knew I had to hit three and four and both laps I did.”

Swindell, of Germantown, Tenn., put on a show in his first visit to the Outlaw Speedway as he piloted the No. 35 Zimbardi Racing entry. The veteran driver knew he made a couple miscues in the slower traffic and that was the difference maker.

“It was some of the toughest traffic I’ve been in in a while and those guys wouldn’t give up,” stated Swindell. “They’d see you and try to race with you. They didn’t know who was what or whatever. I got in a pack of three or four of them and they all caught up with me. Then I went to go one way and got caught up a little bit and Ryan (Smith) got under me. I thought I was better than him, but then he was kind of in the way. He was waiting and letting them slip up a little bit then going under them. You couldn’t run around them and Ryan was in the way. There was a couple times I tried to get out there and go but there would always be somebody where I couldn’t run the whole corner. You just catch somebody and you get stuck in the middle.”

Swindell was very disappointed to see the second yellow late which forced him to give up the lead that he had just wrestled away from Smith. He got the perfect jump, hit the line right and drove by, but it was all for naught. He didn’t hit the second restart as well which allowed Chad Kemenah to power by to take second in the final laps. He had to be happy with third.

“That restart I made a really good start and was able to drive right around him, then the next one he started earlier and everything I did I was a bit behind,” mentioned Swindell. “I spun the tires and then I thought he was going to go up and he came down. I had to get on the brakes and I broke the rear loose a little bit and I wasn’t able to drive across. When I was trying to get back up there Chad (Kemenah) was there. It was one of those things that happened. It was just little things. We had a legitimate shot at winning this race if things had gone our way. We had a car that was good enough to win, it didn’t work out that way for us. It’s pretty remarkable to just come here and get in a completely different car with these people. They did a great job. We didn’t really have to change a lot, just some little things. They are still some little things we need to do, but those guys run those cars every week and they should beat us if you look at the odds. For having a driver that’s old and being in a foreign car, this isn’t too bad.”

The main grandstands were sold out with people eventually being put in the pits. They eventually put people in the back pit grandstands…

Caleb Helms lap of 12.322 in time trials was a new track record…

Smith, Swindell and Caleb Armstrong won the heat races. No consolation event was run as all 25 cars started the A-Main…

Hunter Mackison brought out the caution in the dash. Mackison missed the line going into the first corner and ended up hard into the outside wall. Repairs were made to the front end for him to return later in the night…

The All-Stars now head to the Orange County Fair Speedway on Saturday night before capping off their New York swing on Sunday at the Lebanon Valley Speedway.