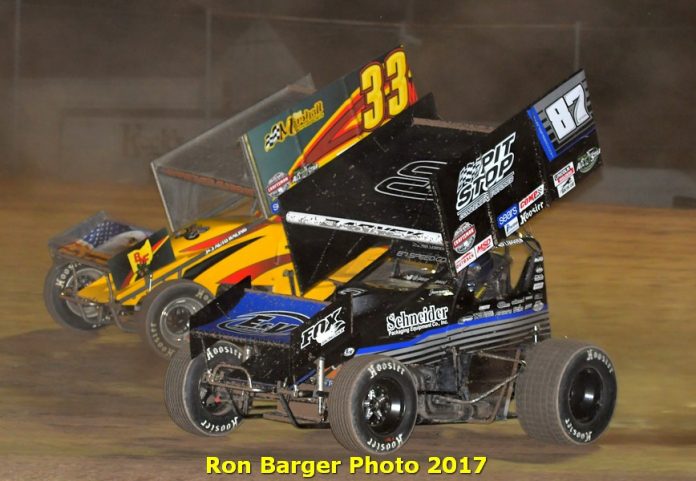 Jason Barney has run a handful of 410 Sprint Car events over the last week. The Brewerton, N.Y., driver competed with the All-Star Circuit of Champions at Eriez Speedway last week, Ohsweken Speedway mid-week with the World of Outlaws before wrapping up everything on Friday night at the Outlaw Speedway again with the All-Stars. It was a great experience for the 360 Sprint Car ace and current high point man with the Lucas Oil Empire Super Sprints.

Barney was grateful for the opportunity and admitted that he’s still got some things to learn as his qualifying efforts weren’t exactly where they needed to be. As a result, based on format, he had to constantly fight his way from the back of the back.

“I’m just thankful to Paul (Colagiovanni) for letting me borrow the engine to give us the opportunity to get our feet wet and see what it’s all about,” said Barney from the Outlaw Speedway pit area. “We’ve built our program around 360 stuff so much that if we ever wanted to do any 410 stuff we didn’t know how far off or in left field we really were. We were close, but we can’t qualify great. That is partially because me just trying to figuring out what we need to do to qualify. We haven’t qualified great the three times we’ve done it. We’ve raced our way in through the heat. It just puts you so far back in the format that you got to over drive the car early to get up there. You kind of use your stuff up early to get there.”

The deal for use of the engine came together over the winter months. At first, Barney wasn’t sure what he was going to do. Whether he was going to take advantage of the opportunity or not due to his main focusses in 2017. Eventually he decided to go for it. Although they had some bad luck at Eriez and Ohsweken, he was able to finish eighth on Friday at Outlaw.


“Paul asked me over the winter if I wanted to do it,” stated Barney. “I kind of bounced it around. We race a lot and with the points and stuff I didn’t want to jeopardize our equipment, our effort and our resources, but we’ve had a good year. I’ll go anywhere, race anywhere and just need to get better. We know we need to get better on the 360 side. We got a lot of work to do as a race team so more we race the better we are. You can’t get better from a being on a boat or a couch.”

Eighth at Outlaw was his best run of the stretch. He ended up 24th at Eriez Speedway after an early race incident and then backed that up with a 17th at Ohsweken Speedway with the Outlaws before Friday night. Things didn’t go as planned but he was happy that the team continued to improve each time out.

“I think we could have run in the top 10 at Eriez (Speedway) too,” cited Barney. “That fit our style. We started 16th and were up to tenth in less than 10 laps and had a really good car, probably better than we had here. We passed some good cars and ended up getting tangled up. Ohsweken we didn’t do the right things, got tangled up on the start, knocked the front wing off and that set our night. All-and-all we are happy. We haven’t had luck but had some confidence in doing the right things with race car. We are just focusing on getting better every time we hit the race track. Luck, that’s just going to be what it is. You got to do the right things to the car and then rest will work out.”

As he said, Barney learned a lot in his brief stint racing against the best of the best. On Friday he worked hard to put himself in the top ten. He battled with fellow New Yorkers Joe Trenca and Paulie Colagiovanni. He talked about his experiences on Friday as well as his focus going forward.

“You just have to be in attack mode every second,” stated Barney. “The harder I drove the car through the race the better. You got to drive the car real hard and then just kind drive it as straight off as you can. I was doing a lot of work to get in top ten. It was fun, but I don’t know how much more we’ll do. We’ll get back focus on ESS stuff here and try to win a championship.”

He’ll continue his chase for the Empire Super Sprint title on Friday, August 4 when the series returns to action at Ohsweken Speedway before a stop on Saturday, August 5 at the Canandaigua Motorsports Park.