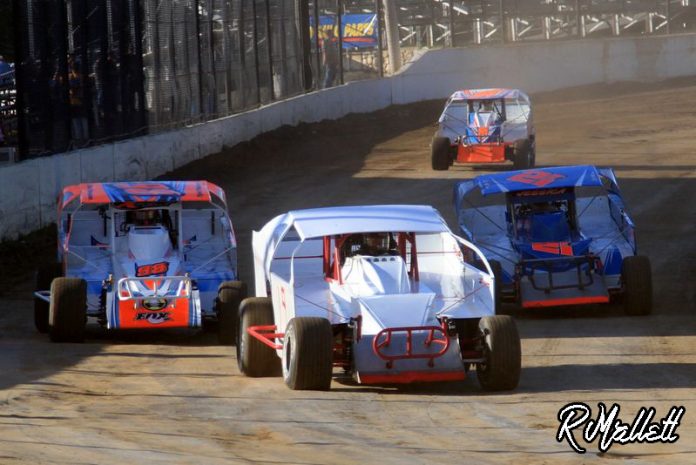 Friday night at Brewerton the first feature that rolled off was the Four-Cylinder Stock class. A young winner is always fun to watch, and when that driver is about to leave home to enter the military it makes his win all the more special. Dakota Bechler was very happy in victory lane as he celebrated his win. Soon he’ll be a US Air Force enlistee headed off to boot camp. His dad Ray celebrated with him after chasing him to the finish line for second.

The Mod-Lite feature is always one of the most contested and fun to watch on any given night. Jeff Sykes and Mike Mullen were mixing it up pretty good in their battle for the lead. Sykes had the top spot and Mullen had a good run off turn four coming to the finish line. As Sykes moved up to carry the momentum Mullen made contact with Sykes’ rear bumper slightly loosening up his car. Mullen appeared to lift enough to not dump Sykes, showing that the drivers in this class not only race tight and hard, but respect each other as well.

The Sportsman feature was eventful, as were all of the night’s finales, with some interesting parking patterns. At one point there were two sets of cars facing each other nose to nose in turn one. The dry slick seemed to defeat many teams this week at the end of the night. Alan Fink won another hard fought feature, with Tyler Trump and Todd Root in hot pursuit.

The Modified feature was fun to watch as Matt Hulsizer jumped out into the lead from the front row while more experienced drivers threaded their way through traffic toward the front. Billy Decker made his way toward the top as the laps wound down, but Matt decided it was time to move off the bottom to get around lap traffics do to keep Decker at bat. His decision paid off as he earned his first win of the year, and his first since 2015 at the Demon.


Saturday was kind of enjoyable and perplexing at the same time. An early morning meeting, a few hours a with my family, a graduation party, and Fulton Speedway all had their hands on my time. I arrived at Fulton in time to do a “walkabout” through the pits, prayed the invocation, spent a little more time in the pits looking after some teams facing adversities, and had to leave to pick up my son at the graduation he was speaking at. Needless to say I wasn’t able to catch much racing action.

One thing at Fulton caught my heart. Rachel Moyer and her family held a fund raiser for the Golisano Children’s Hospital in memory of Jennah Jbarah. The “yellow out” saw employees, fans, race teams, and officials wearing yellow to support children fighting different forms of Sarcoma. It is Sarcoma awareness month and the entire speedway did a great job raising awareness and money to support children fighting cancer. Modified driver Kate Hile is a survivor and played a roll in supporting Rachel for the event. Blind raffles for race car body panels and other things helped raise money, which is being donated directly to the hospital to help fight childhood cancer. Thank you to everyone that participated in some way to help them raise $1558.00 for this imortant cause.

Sunday after church and lunch with my bride I was off to Utica-Rome Speedway for the Gene Kotary Memorial Pro Stock race. Gene was fixture at the track in its pavement days. The official press release of this event stated “Gene Kotary was one of the top Charger/Street Stock division drivers in the late 1970’s at the track. Gene Kotary had 10 career Street Stock victories at the track between 1975 and 1978 and secured his crowning achievement, the 1978 Street Stock Track Championship in the last year of the asphalt track”. Sadly, Gene lost a five year battle with cancer in October 23rd last fall. His daughter Brandy joined me track-side with her mother Marcia to extend their gratitude for this event honoring Gene. In addition the purse was raised to $300 for the winner.

The Gene Kotary Memorial Pro Stock race was the first feature of the night. Shane Henderson and Mike Welch started near the rear and wasted no time moving to the head of the pack. Welch caught up at the half way point as an exciting battle for the win took place for the rest of the race. Welch and Henderson swapped back and forth and nobody really gained an advantage. On the last lap coming off turn four Henderson seems to be caught behind the lap car of Ernie Staalens, but somehow squeezed out enough space between his car and the wall to beat Welch by 0.027 seconds. I was sitting right at the finish line to see one of the best finishes all year. Gene’s Kotary’s family got a great memory seeing a fantastic race in His honor that went green to checkered.

The Sportsman field was 25 cars strong for the next feature. The first caution came out on lap seven for Mark Effner who appeared to sheer off his left spindle. Unfortunately for Brent Joy, who led from the start, the caution put Rocky Warner right beside him. Warner used his preferred bottom line off turn two to gain the lead. The second caution came out on lap 11 as two cars came togther in turn three. Warner maintained the lead on the restart. A few more cautions slowed the pace and Warner was able to open a wide lead on the restarts and bring home the win. Brent Joy finished a strong second, with the young Charles Tibbets finishing a solid third.

The Modifieds were the next feature of the evening. Mike Mahaney and Bobby Varin raced side by side during the opening laps of the 35 lap main event until Varin was able to find some forward drive off turn two and gain the lead. A lap 7 caution put them side by side again. Varin retook the lead as Sheppard worked his way through traffic and ran him down. Matt took the lead on lap 20 over Varin with Mike Mahaney in a solid third spot. Pat Ward began challenging Mahaney for third but didn’t have enough to get by. Sheppard capped the night with a win. From the first green flag at 7PM for the first heat race, to the last checkered flag for Tom Juno as he won the Novice Sportsman division at 9PM ,shows the talent it takes to run an efficient show on a Sunday night with four divisions.

Another thing happened Sunday during the Gene Kotary Memorial Pro Stock race. Frank Hyatt started last in the line up but raced his way up to a solid third place finish. When I saw him afterward he began the conversation by saying “tell me that prayer doesn’t work” in a way that convinced me he had been talking to God about something. When I asked him to clarify what he meant, began to tell me how during the heat race his clutch gave out. He was in the feature line up praying that the car would run and the clutch would work. It not only worked, but his drive from the rear to third place without any cautions to bunch the field up was nothing less than amazing.

I wrote about the power of the prayer of agreement a week ago, right before I received the news that a friend of the sport lost his life due to a medical complication. John Flock was well know to any insider in racing. Throughout his lifetime he had been a car owner for different drivers, an announcer, a promoter, a journalist, and historian. His love for the sport was only eclipsed by his love for his wife Sandy, his familychildren, and grandchildren. Please keep his family in prayer for peace and comfort as they celebrate his life Tuesday. Also remember to be vigilant in prayer for Mike Humphrey.

Frank Hyatt’s testimony was pretty amazing, and he’s totally convinced there was divine intervention, protection, and preservation working for him after he prayed. I agree wholeheartedly. That’s because the favor God extends to us isn’t based on our performance. It’s based on the accomplishment of Jesus Christ to atone for our failed performances. Consider a racer who has an poorly handling car. He has to rely on something else to make the car win. God sent Jesus Christ to become like us, and empowered Him to resist every temptation known to mankind. His perfect performance made up for our lack of righteousness. God’s grace, defined as undeserved favor, is exended to anyone that acknowledges Jesus Christ as Lord with the belief that He paid our debt to satisfy God’s wrath.

Your life may have hit some ruts and bumps. You may have crashed as you run your race in life, but Jesus Christ mastered the human experience so we can enjoy our eternal experience together with Him, our Champion. Frank Hyatt knows how to talk to God because he’s confident that God hears him. Frank keeps short account with God by confessing his failures often. God’s answer gave Frank one of the best drives he’s had all year. King David had a similar revelation that he shared in Psalm 66.

“Come and hear, all you who fear God; let me tell you what he has done for me. I cried out to him with my mouth; his praise was on my tongue. If I had cherished sin in my heart, the Lord would not have listened; but God has surely listened and has heard my prayer. Praise be to God, who has not rejected my prayer or withheld his love from me!
Psalm 66:16‭-‬20 NIV”

We can all have that confidence. We can all know His love that richly. We can all experience the favor of the Lord by acknowledging our failed performance (sin), identifying with His perfect performance to make up for ours (propitiation), and declaring Him as our Lord vocally. If you’re at a cross road and searching for answers, He’s got the road map to your life in His presence. Look Him up, open up to Him, and invite Him to lead you. He’s waiting with open arms.

We can be reached at Finish Line Chaplain on Facebook or by email at flchaplain@windstream.net if you need anything.