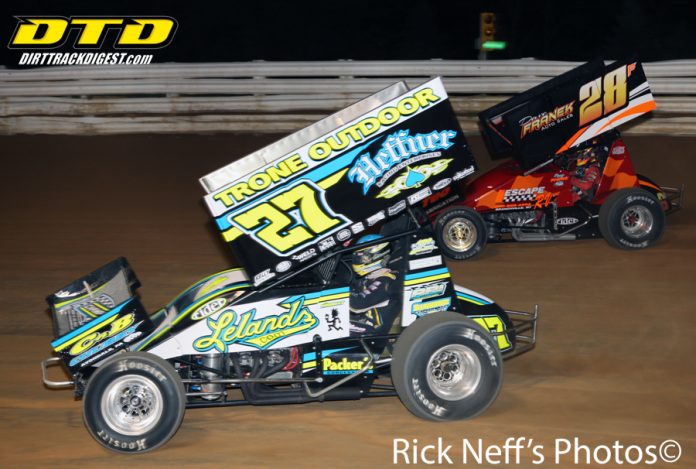 Night number two of the 17th annual Mach 1 Chassis National Open for the 360 sprint cars ended on a high note for Pennsylvania Posse driver Greg Hodnett. A third-place effort on Saturday night at the Port Royal Speedway in his 410, and a win on Sunday night at the Selinsgrove Speedway with the 360s wrapped up a very solid weekend for the former World of Outlaws racer.

Hodnett finished third in heat race number three and drew the pole for Sunday night’s 30-lap A-main event. He took the lead on the first lap and never looked back, leading all 30 laps on his way to a $6,000 payday.

Hodnett was forced to hold the lead through multiple restarts and deal with heavy pressure all race long from Saturday night’s winner and eventual runner-up, Mark Smith. However, Hodnett did not have to deal with what was most likely his toughest competition for long, as the hard-charging Mach 1 Chassis number 12 of Blaine Heinbach was reeling in Hodnett with 10 laps left before suffering a reported engine failure five laps later.

Heinbach started sixth and was up to third by lap 10 and began battling with Smith for second just two laps later. A red flag was thrown on lap 14 for Nate Snyder who flipped after hitting the wall in turn four. The ensuing restart saw Heinbach get under Smith again going down the backstretch on lap 15, completing the pass for second entering turn three. Heinbach’s car would only survive 10 more laps before his mechanical issues occured, as he came off of turn four very slowly and eventually parked it before the frontstretch pit entrance.


With Heinbach out of the race, Hodnett took the green on the restart and led the field to the checkered. Mark Smith crossed the line in second, after winning the night before. He said it was a solid weekend overall for he and his team, but had too much gear in the car on Sunday, which didn’t help his chances to pull off the weekend sweep.

“We just had too much gear in it and toward the end it wouldn’t mile-per-hour around the top,” Smith said. “I think if we had time to pull the gear out of it, we would have been much better.”

Curt Michael came from the 10th spot to snatch the final podium position away from Jason Shultz with three laps remaining. He had a very solid racecar all night long, on a track surface he was very pleased with.

“The track, it was great from the bottom to the top,” he said. “I don’t know what the other guys were doing but I could run the bottom, middle and the top. You couldn’t ask for a better racetrack.”

Michael’s number 5G seemed to get better as the race went on, and he briefly thought he may have had something for Smith in the final laps.

“I got anxious because I was up to third and I thought I could get Mark, and I started over-running the car and lost track of him,” he said. “When I slowed back down, I caught him again. If I would have done that the whole time, I probably could’ve got second, but we’re tickled to come from 10th to third.”

Michael did a lot of battling for position with other cars on his way to the front, and he appreciates the effort his competitors make to drive cleanly.

“All the guys up in the front are nice, clean racers and you know you can get next to them here at these high rates of speed and trust them,” he said. “That’s what makes racing really good, where you can trust the guy next to you.”

The track surface speared to be in very good condition, as it stayed relatively tacky through the A-mains due to the amount of rain that fell two days prior. The middle to lower grooves did start to take rubber and slick-off toward the end of the race, but it was a three-lane racetrack throughout the event…

A total of 28 cars were on hand for the event, although one was unable to compete. Josh Weller’s number 63 appeared to have been experiencing engine problems after hot laps, retiring him for the night…

Heat races were won by Blaine Heinbach, Billy VanInwegen and Jason Shultz, while Heinbach set the fast time in timed warm-ups at a 17.431.