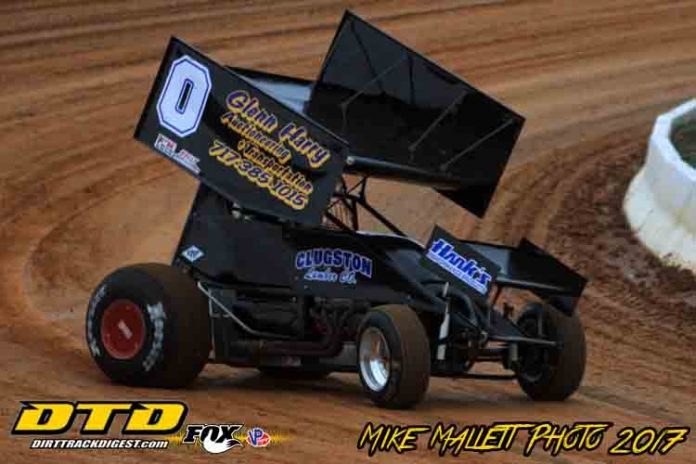 The 2017 edition of the ‘Living Legends Dream Race’ at Port Royal Speedway is in the books, and what night it was for Rick Lafferty. Winning both semi-feature number two and the 35-lap A-main event, Lafferty took home over $12,000 in prize money and his first feature win of the season.

Lafferty started on the outside pole, grabbed the lead on the first lap and never looked back. Podium finishers Greg Hodnett and Lance Dewease chased him non-stop for all 35 laps, but were not able to get underneath the leader.

“It seemed to work, it felt like I was on a rail a lot with the left-rear,” Lafferty said in victory lane. “I changed a lot of stuff with my shock program, VRP helped me out a little bit. I kind-of went back to my old stuff, and I guess it worked. But it’s a big advantage starting up front – I mean, in lap traffic, I was in trouble.”

Lafferty was also ecstatic about his big payout, and he agreed with the victory lane announcer that this win was the biggest of his career.


“I’ll be honest with you, I don’t know what you’re talking about ‘bigger money wins,’ I never won the lottery or anything,” Lafferty said in joyful spirits. “Seven-thousand-something at Bridgeport was probably my closest winnings.”

Lance Dewease came from the sixth starting spot to steal the runner-up position from Greg Hodnett on the final corner of the last lap, in what was arguably one of the most exciting battles of the race. Both he and Hodnett were in pursuit of Lafferty all race long, simultaneously battling over the second spot lap-after-lap. Hodnett held the spot until the last lap, where Dewease found some grip on the inside of turn four and was able to pull a last-second slider to take the spot away.

“Clean air was everything. As soon as we got by the lap cars, I could maneuver and really ate those guys up,” Dewease said. “Greg kind-of had nowhere to go, he had to make a move one way and I went the other, and we were fortunate enough to get by.”

Dewease may have come up one spot short at the line, but was content to see Lafferty pick up the win.

“Rick did a great job tonight on those restarts,” he said. “He didn’t ever let anybody get alongside of him, and he put himself in a fast position, so he deserved to win this race.”

Greg Hodnett completed the podium in third from the pole position. He said the struggles he had coming out of turns three and four were the main culprit.

“They were just better than we were. I was just trying everything I could, running the top, middle and bottom to try and get something,” Hodnett said. “We just didn’t have very good drive off of [turn] four, no matter what I was doing. Everything I might have gained in one and two, I lost in three and four. We were just lucky to hold on to third, to be honest.”

The track surface was in stellar condition all night long, as heavy storms swept through Pennsylvania all day Friday, laying down a ton of moisture. There seemed to be enough rain water in the red clay surface to keep it tacky in all three grooves…

The ‘Living Legend” in the spotlight this year was Mike Wagner Sr., a long-time competitor at Port Royal. His number 55 sprint car was on display during the autograph session earlier in the day, and his sons Mike Jr. and Logan were both part of the pre-race ceremonies, both being featured in interviews about their father. Mike Sr. came up a bit short of qualifying for the event, finishing sixth in the B-main, but was voted in as the 25th starter by the thousands in attendance over George Streaker in a crowd-noise competition. Mike Sr. ended up retiring the A-main early with only 16 laps complete in 24th. His son Mike Jr. served as his crew chief for the evening, while his other son Logan crossed the line 15th in the A-main.

Ryan Taylor experienced engine issues early in the evening, forcing him to retire for the remainder of the event…

Instead of heat races, the 35 sprint cars in attendance time trialed for starting spots in two separate “semi-features,” which were won by Danny Dietrich and Rick Lafferty…

Semi number one saw the number 35 of Tyler Walker tangle with Logan Wagner’s number seven in turn four on the third lap, sending both drivers up and over. Wagner only received minor damage to his car and was able to return for the B-main and grab the final transfer spot to the A-main. Walker, however, suffered unrepairable damage to his ride and was done for the evening…

Likewise, the second of the two semi-features saw an almost-identical wreck in the same spot on the same lap. Jared Esh came together with Mike Wagner coming off turn four on lap three, sending them hard into the fence after flipping multiple times. Esh’s night was done, while Wagner returned for the B-main…

Lance Dewease put on quite the display of passing in semi number two, as he went from 17th to 7th in just three laps, finishing third in the 16-lap event.