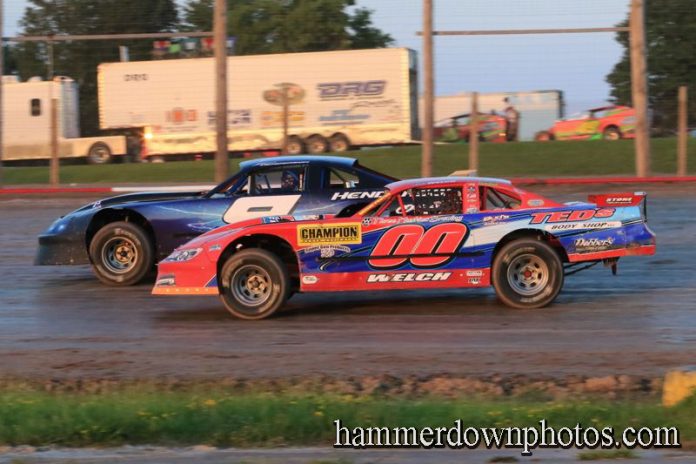 Okay so the early shows at the Utica-Rome Speedway this season were hampered by weather inflicted maladies as the tracks took time to work in due to extremely high water table, it was rough, the show started late and got done later.

Well, with a bit of help from Mother Nature those problems appear to have disappeared. For the second consecutive show the track has managed to start at 7 p.m. and finish up shortly after 9 p.m. on Sunday night.

So where are the fans?

Some might think the early season woes impacted returnees. Others might say Sunday isn’t the night it use to be.


Well, during the off season in looking back at his Mod fields Bill Shea and wife Kim decided to cut the NASCAR umbilical chord and join DIRTcar.

The Mod fields are better (or at least around what other area tracks are getting), the Sportsman numbers are respectable.  The track also kept the Pro Stocks while adding a Rookie Sportsmen class.

So the pit numbers aren’t high as Glenn Ridge shifted to Sunday and the Pro Stocks closer to the eastern end of the state are running there. Loyalty certainly doesn’t always have a lot to do in racing.

The Sheas appear to have a similar problem as Brewerton as crowds (except for major specials or demo derbies) appear down.

Not sure what the answer is as fans want an in and out show with action and that is being supplied by UR.

For those who sniped on the Internet that they would never go there again because of the early season rough track and late finish give the place a try again.

Short track racing can’t afford to have narrow-mindedness keep the fans away. There aren’t as many seats to go in the grandstands as there use to be so come out and support local businessmen who risk their own finances to supply a place for racers to race and fans to enjoy the sport that they allegedly love so much.

Who knows maybe the days of specials only might eventually creep in to local track schedules and then the Internet folks will complain that tracks aren’t running.

Jerry Cook in the House

Former UR owner Gene Cole had a very special guest in his box on Sunday night as multi-time NASCAR Mod champ Jerry Cook was on hand.

“Personable” and “classy” are two words that describe this very genuine man.

I was given the opportunity to sit down alongside the Hall of Famer and talk about a variety of things including how he met his wife Sue along the fence at Utica-Rome when he was a driver, the games of who has a car where in chasing points against rival Richie Evans, NASCAR fan support, what is was like racing both dirt and asphalt with the same car five or six nights a week and drivers who impacted his career. It was probably the most enjoyable 15 minutes I’ve had in a very long time and hopefully the fans on hand enjoyed it as much as I did.

Cook had a tremendous amount of respect for Bill Wimble who was also one of those gentlemen racers.

Jerry and Richie were polar opposites as I asked “If you guys had been at a party together what would it have been like” as they were both extremely competitive. Cook, who was very much low keyed said, “If there was a party I probably wouldn’t have been at it, but I understand Richie would have been having fun. I would have been with my wife Sue, who next year I will have been married to for 50 years, at home.”

For me watching the red and white 38 race around New York State when I was a kid is one of the memories I carry. After races Jerry would stand around (as many of the drivers did in those days), visit with fans, sign autographs and wait until everyone was gone before loading up and chasing another one of the upwards to 100 races he might run.

I’ve noted before I’m a writer and announcer, but also a huge fan. The opportunity to interview Jerry Cook will be one of those I will remember (right along with talking with Jack Hewitt in Florida in January).

It was an additional treat for the fans (and me) at Utica-Rome.

Well, the track was fast as each and every driver said that in victory lane.

You could sense the speed even from the grandstand as the moves and on track positioning of Mod winner Matt Sheppard, Pat Ward, Bobby Varin, Sportsman victor Rocky Warner and even the Pro Stock photo finish duo of Shane Henderson and Mike Welch were quite obvious that these guys had been given a good track to run.

Sheppard, who won his 36th career feature at the track, in winning by five seconds, said,

“This car was so much fun to drive tonight. It is just working so good. You could run the top, bottom or middle and I had to bet up on the wheel as the track had a lot of bit tonight.”

Yellow basically stayed in the holster of Matt Burdick and Matt benefited as he explained, “The longer the run went the better the car got.”

While Super Matt started 12th, his counterpart in the Sportsman class Rocky Warner came off the grid from 14th.

Brent Joy took the early lead, but when Mark Effner lost the left front tire and pulled to a stop the 2.9 second lead over Warner was gone. The restart came, Warner took the lead and the rest was history.

The eight car Pro Stock Gene Kotary Memorial had a disappointing field, but produced the most exciting finish possibly of the season.

Throughout the last half of the race Henderson and Welch put on a dynamic show. Henderson grabbed the lead on the third lap and then Welch took over on the backstretch with eight to go. Shane didn’t go away.

Using lapped cars (yes with eight cars on the track they had to fight two on the last lap) Henderson went high around Ernie Staelens while Welch went low. They crossed the line, officials went back to the video for visual review and by .027 of a second Henderson won his first of the year and first at UR.

He was overjoyed as he makes the two and a half hour trek from Catskill each Sunday. Looking back at the race Shane said, “I saw the 00 go by me and I thought not again.”

Between three and four one (or maybe both) nearly ended up off the track as he said, “I thought I was going to go over the bank and I wouldn’t have blamed him if he did.”

Throughout the race Henderson was tough all around except for one spot as he noted, “He was killing us down in one and two, but fortunately I could make it up in three and four.”

Of the finish with the lapped car there in the middle Henderson said, “Thank God the 17 didn’t go to the wall on the front stretch as there was no way I was going to slow down.”

He had just enough room for one width of a car between the concrete and the 17s.

It was a good one.

Alan Johnson had mechanical problems in his heat as rear end cover came off. However, he started 20th and by the seventh lap was 10th. He eventually finished eighth…

Fuller made a tremendous move from eighth to sixth to put him in contention for a top five finish. With less than six laps to go the battle for fifth included Fuller along with Mike Maresca, Gary Tompkins, Marc Johnson and Alan Johnson. They were shuffling lap after lap…

Sportsman teen Charlie Tibbitts started up front, but amazingly he was still there at the end. Charlie finished third and at one point stormed under Joy for second only to be sent back because a lap hadn’t been completed when the yellow flew. Best drive of his young career…

Kyle Kiehn had a tremendous restart moved that picked him up three spots and put him in contention for a top five finish. He came home fifth after a late race pass by Matt Janczuk…

Jeff Taylor, Andrew Wren, C.J. Castelletti and Jeremy Nesved all got involved in a jingle between one and two on the 11th lap. Taylor headed to pits with a right front flat and didn’t have time to change it to get back out…

Chris Mackey ran well early, but faded to 10th at the end…

Pro Stock driver Frank Hyatt appeared to be headed for a wasted night. He slowed immensely in the heat and started at the tail end of the feature. He didn’t look very good early, but as the 20 lapper played along the car got stronger and he came home in third. Guess he salvaged a good night night…

Tom Juno, who has won three Novice mains at Fulton, made the trek to UR for the rookie class and ran solidly in getting the win over Marty Kelly III and Alexa Jacobs. Tom loved the place calling it fast and said he would be back. Owner of Power Seal, he is driving for the first time this year and apparently having a lot of fun…

Autograph night at UR this coming Sunday along with the Mods, Sportsman, Pro Stocks and Rookies.

Comments, news and notes send along to foley395@hotmail.com