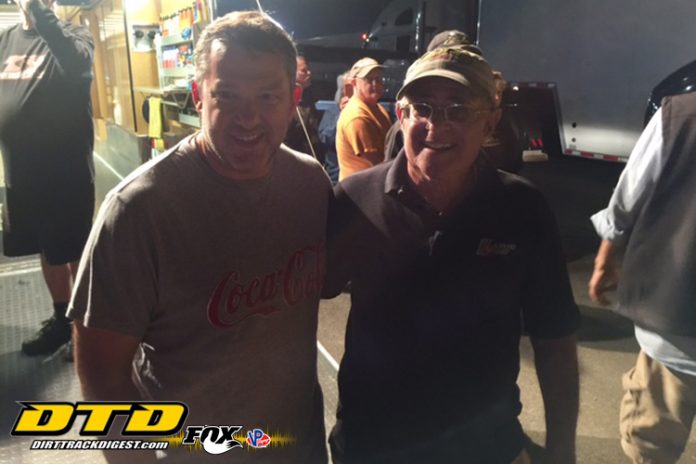 Friday night was a celebration of life for Stan Da Man, Lyle Devore’s dad who passed away last October.  Lyle took his dad’s favorite number and made it a night of everything 32.  Many stepped up to honor Stan with $320 being paid to the winners of the Modified heats by Grady Vintage Photos.  All features were 32 laps with each lap paying $32 to the leader.  Many drivers came to Albany-Saratoga on Friday to pay tribute to Lyle’s dad. In the pit area we ran across some good friends who we see at many tracks, Willy Decker and Amy Walton.  Amy had not been to the track in 13 years, Willy had never been to Malta.  With them on Friday was car owner and sponsor Rich Dodson.  Willy helps Dodson set up his cars on occasion.

Early in the evening we went near the pit grandstand to watch the Limited Sportsman heats.  There also watching the heats was Brett Hearn.  You might wonder why, but by the end of the night it was clear, Brett does everything he can to be prepared, he won his 899th career race. Next we made our way to one of the far corners of the speedway and found one of the newest racers at the track.  Allana Jordan of Warrensburg is 14 years old and a true rookie, she started her racing career this season.  Allana did not come from go-karts, slingshots or any other form of racing.  She is heading into ninth grade this September and says she is having a great time her first year.  Allana said, “I have two second place finishes.”  Her worst finish is fifth in the Four Cylinder single cam division.  She is currently in second place in points.  On Friday she finished third. On Saturday we were invited to the N.E.S.C.O.T. (North East Stock Car Old Timers) meeting/luncheon at the Winner’s Circle.  It was their annual trip to Fonda Speedway for the track’s Hall of Fame Induction Ceremony and Nostalgia Night.  This is a group of racing community members dedicated to preserving the history of local racing along with helping those who are racing now.  Look for a website for NESCOT in the near future.  Member Mark Krosky has been working with local photographers and others in the racing media world on the development of the site.  The current group has a few very active members who have been busy the past few years raising money by way of a nostalgic/lottery calendar sales that they take to tracks all over t he Northeast.  This takes man power and the club sent out a plea to members who were at Saturday’s meeting and others that the few traveling to the tracks to sell calendars could use any help available.  Look for N.E.S.C.O.T at Super DIRT Week this October as they will be sponsoring the last chance events for Modifieds, Sportsman and Pro Stocks.

Newly inducted Fonda Speedway, Hall of Fame member Johnny Kollar was at Saturday’s meeting to join the club.  Guess John feels that once your inducted into the Hall of Fame, you’re an old timer.  This is so true in so many books but these people may be older now but they are still very active.  John is a welcome addition and the club congratulated him on his induction into the Fonda Speedway Hall of Fame that afternoon.

N.E.S.C.O.T. Treasurer, Rich Carpinello presented the clubs annual S. A. M. (Superior Achievement in Motorsports) award to Al Kugler who many will remember as the owner of one of C. D. Coville’s No. 61 and the Barrel Head Root Beer No. 24 of Kenny Shoemaker.  Al also raced Late Model’s in the seventies at both Lebanon Valley and Fonda, beginning at Lebanon in 1970 with a coach.  Al has been involved and active in local racing much of his life and has helped many up and coming racers with sponsorship. Al currently sell suspension parts under the Kaiser Torsion Bars out of Germany.

Our next stop on Saturday was at the Fonda Speedway Hall of Fame inductions.  As we arrived we also got to see many of the vintage cars on display in front of the Fonda Museum.   Some of the same cars would race later in the evening.  As the first curators of the Fonda Speedway Museum when it was in the Fultonville McDonald’s for many years we are proud and amazed at what Dave and Jackie Lape and their dedicated crew have accomplished in making the museum grow into a showplace of Fonda Speedway history.  It was great to meet all of the inductees, some that we met for the first time and some that have been friends at Fonda and in racing.  The museum crowd that came for the inductions was treated to some great stories and interesting history.  This Wednesday, August 2nd, Fonda will honor its most winning driver, Jack Johnson with the third annual tribute night for Jumping Jack.

Sunday night Ed made the trip to Howie Commanders high banks, Lebanon Valley.  At one time Sundays open competition at The Valley.  Now the only Sunday show on the schedule is Tony Stewart’s Arctic Cat All Star Sprints along with the King of Dirt 358 series.  This was the second appearance of the All Star Sprints at the Valley and one of the special times of the evening was watching Tony Stewart wheel his No. 14 around the high banks.  His moves in his heat was worth the price of admission.  After the show Tony signed autographs and posed for photos with many of his fans including Howie Commander.  It was a great finish to a great night.

Fast timer of the night in the sprints was Sammy Swindell and the history of sprints at The Valley shows Sammy was also fastest in time trials 36 years ago when he was racing with the World of Outlaw sprints at Lebanon Valley.