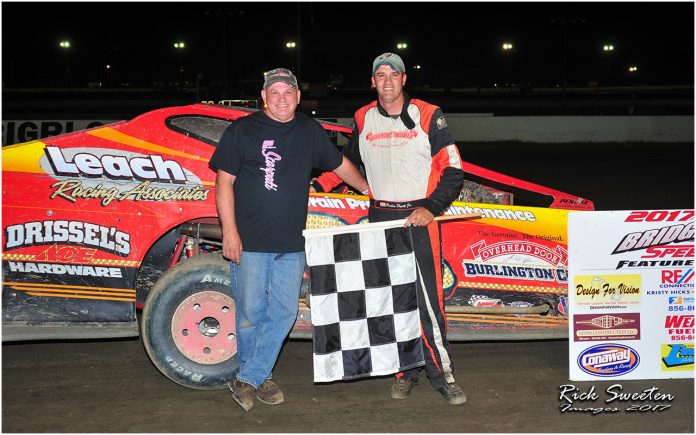 I guess with the way this year has gone this season weather wise, getting two out of four shows in this past weekend should be considered a good weekend and when it was all said and done two drivers were able to post their first wins of the season at their home tracks.

Big Diamond Speedway 7/28/17 – Rain once again forced promoter Jake Smulley to cancel the night’s action just as the cars were about to hit the track for warm-ups.

The track will give it another try this Friday 8/4/17 when it presents the “Hunt the Giant” night featuring the 358 Modifieds. The U.S.S. Achey sportsman will run the Fayash Memorial 30 lap feature paying $1570 to win. The Road Runners will also be on the card for the night.


New Egypt Speedway 7/29/17 – Due to the extreme amount of rain the track received on Friday and an unfavorable forecast for Saturday, the management of the speedway was forced to postpone the night’s events. Their decision proved correct as showers moved through the speedway during the evening.

This Saturday at the speedway the 358 Modifieds will headline the program along with the Sportsman and the wingless Sprint Cars.

Billy Pauch Jr continues to lead the battle for the 2017 track championship followed closely by Ryan Godown and Danny Bouc. Johnny McClelland and Ryan Krachun round out the top five point getters.

Grandview Speedway 7/29/17 – One would have never thought that it would be July 29 before the tracks all-time leader in wins Craig Von Dohren would grab his first win of the season at his home track of Grandview. It’s not that Von Dohren hasn’t been fast all season, but different factors kept popping up preventing him from getting that first win. The win for Von Dohren was win #103 in the 358 Modified division at the track.

Von Dohren was on a mission from the drop of the green flag and made his way to the front in quick fashion. Once Von Dohren was able to get past arch rival Duane Howard, there was no stopping the driver out of Oley, Pa., in his march to the front. Von Dohren grabbed the lead from Kenny Gilmore, who was in his new ride the Dennis Bailey #81 on a lap 13 restart, and was gone after that. Gilmore held on for second over Frank Cozze, Duane Howare and Tim Buckwalter.

I caught up with Von Dohren on Sunday at Susquehanna Speedway and asked him how it felt to finally get his first win of the year at Grandview.

“We’ve been good at Grandview all year. Our lap times were good but we just didn’t have the results we wanted. It does feel good to get that first win so that is not on our backs now and hopefully we can keep it rolling. The track was really good last night, it had a top and bottom groove so that really helps and that’s kind of how it was in the past. It’s been a rainy season and they have new clay on it. They’ve been trying and it’s just been a little too heavy there for a while and you get guys out front who run away with things but it is what it is.  You have to deal with it.”

With Von Dohren’s winning coupled with Jeff Strunk finishing back in the sixth spot, Von Dohren has regained his points lead over Strunk. Mike Gular, Duane Howard and Doug Manmiller round out the top five in the chase for the title.

This Saturday is the annual “Forrest Rogers” Memorial race paying $10,000 to the winner. Craig Von Dohren has won the previous two years and will be looking to make three in a row this Saturday at Bechtelsville, PA oval. The Sportsman and Late Models will also be on the docket for the night.

Bridgeport Speedway 7/29/17 – It’s been a season that has been rather forgettable for Richie Pratt Jr. at Bridgeport Speedway until Saturday night. After a stirring battle with good buddy Dominick Buffalino in the late stages of the race Pratt was finally able to grab his first win of the season. It was Pratt’s 24th career win at the speedway and vaulted him past Steve Bottcher to 10th spot on the track’s all-time winners list.

Pratt is the definition of a low buck racer, who along with his father, put everything they have available into racing their dirt Modified. I had a chance to talk to Pratt on Sunday while waiting for the action to start at Susquehanna Speedway to discuss his big win.

“It feels really good to finally get the win, it’s good for team morale. We’ve been fast enough to win all year but little things have been happening to the car at Bridgeport to prevent us from winning, but last night stars aligned for us finally. It definitely helps us in the pocket for sure to help us keep things going.”

Pratt also talked about his battle with Buffalino and how he got the lead back after losing it on a restart.

“Dom and I really went out there for three or four laps side-by-side there and never touched, Dom’s a great person to race with and I was thankful for that. He got by me on that one restart there on the outside and stayed out there and then the bottom started to come in better.  The top started to go away and I was able to get back under him.  Once I did get under him, I was able to hold him out there. That was the main thing there, I didn’t want him to get ahead of me and be able to switch lanes back to the bottom because if he did that I probably wouldn’t have won.”

Bridgeport Speedway returns to action this Saturday night with their popular “Bike Night”. The big block modifieds headline the action along with the crate/sportsman and outlaw stocks.

Mike Gular made his debut in the Terry Fanascht #44 at Susquehanna Speedway on Sunday. The team was at Big Diamond on Friday night to make their debut but the rains came before the night could get underway…

With New Egypt rained out on Saturday, Billy Pauch Jr invaded Bridgeport in the Danny’s Pizza Pizzazz #51 and came away with a nice sixth place finish…

DRIVER OF THE WEEK: This week’s honor goes to Richie Pratt Jr for his popular win at Bridgeport Speedway on Saturday night. Richie and his father put all they can into their small family owned team to be able to race each and every week and this win surely means a lot to them. Congratulations Richie on your big win!