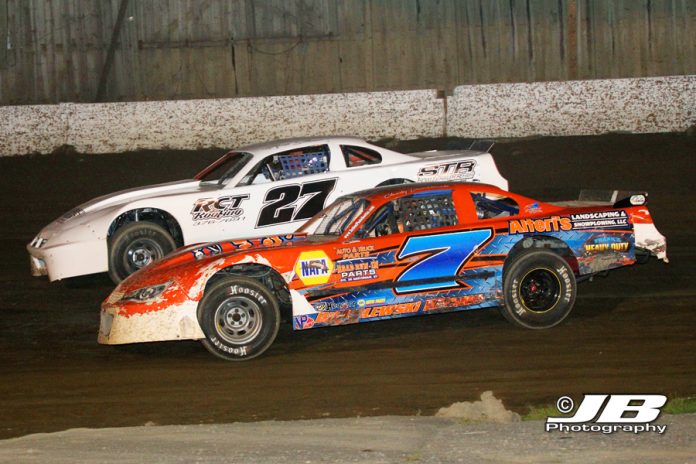 Two days before the Fonda Jack Johnson Tribute Night I received a call asking if I would like to announce with the veteran Jim King.

Well, it didn’t take long to decide. After all I enjoyed watching Jumpin’ Jack run for decades and I always like a challenge of a new track with a pit packed with many drivers I’ve never seen before.

The drive from Oswego to Fonda is just over two hours.  When I got 15 miles from the track the rain started pelting my car as I drove east on I-90.

However, once at the track it never even sprinkled again and after shuffling my equipment to the tower I was off for the pits.


As I walked toward sign in I looked to my left and there was the Fonda Speedway Museum. Well, let me tell you this is a small treasure. I wandered through briefly and the folks involved with maintaining the history of this legendary fairgrounds track have done a tremendous job.

Certainly cars were in the spotlight, but the Hall of Fame, racing hoods and body panels, trophies, photos, programs, archival information and all sorts of “must read” pieces emblazoning the wall enhanced the racing experience.

To the pits and not only were the Mods on hand, but the Grit Sportsman. The Pro Stock field was sensational as they were there for the Hondo Classic in memory of the late Hondo Carpenter.

The Friends of Hondo Memorial Society raised all sorts of money for just about every position, provided paid heats and a list of bonus awards that was enough to fill a six page special program recognizing all of those who supported the event.

Kenny Martin had a Hondo car under him and he talked about him prior to the event.

He said, “Hondo was a good person and he got along with everyone. He was a good friend and I am here to support him and his memory.”

Martin said, “I haven’t been here for two years, but had to be tonight.”

He is a three-time Fonda champion with more than 50 wins at the historic half mile.

It is quite obvious that Hondo was well thought of by many folks and the 12th edition of the 30 lap race was a classic between four time and eventual winner Nick Stone, Chuck Dumblewski and Josh Coonradt with Dean Charbonneau, Jason Casey, Ivan Joslin and Jim Normoyle all within two seconds of first place.

Stone won over Dumblewski by .254 of a second in what genuinely was the “Hondo Classic” classic.

When Mods rolled into the pits there weren’t a ton of outsiders, but the ones that did show up were quite impressive.

There was the 39 of Tim McCreadie, the Jeremy Smith owned 91 for Billy Decker, the new Bicknell 88 of Mike Mahaney, the 9s of Super Matt (Sheppard) and Jessey Mueller. Toss in the regulars and their was a makings of a solid show.

As an announcer you hope that the race would live up to the type of experience that Jack Johnson would have left on the crowd.

Sheppard built a six second lead, but yellow bunched them up. Eventually Mahaney was able to get Matt in traffic and then Mahaney had to hold off a rapidly closing Tim Fuller as at the line the difference between first and second was .175 of a second.

Anyone who has followed Mahaney’s exploits this year knows that this hasn’t been good year.

In victory lane he was physically shaking with emotion.

Reflecting on the race he said, “The 9s is the class of the Modified field at this point. We’ve been struggling and I can’t thank all of these guys enough for believing in me. Things have been good, but they’ve kept working and it paid off tonight. These guys really know how to build a race car and did a phenomenal job as the car goes through a lot of abuse through the course of a race and it was great tonight.”

On the pass for the lead he said, “He went low on a lapped car and somehow I made it past on the outside. I just went for it.”

Outside of the second row was the starting spot for Rocky Warner and he made the most of his position.

The front row consisted of a regular Limited Sportsman driver Mike Block and 14-year-old Griffin Mansmith so there was an amount of inexperience on the front row.

The drivers up front earned their starting positions by getting in a handicap draw spot in the prelims, but once Warner cleared them that was it as it was a benefit.

The night was going smoothly until all heck broke loose on the front stretch which resulted in a near half hour red flag clean up.

Dave Schilling, who said Fonda wasn’t one of his best tracks, had won his heat in convincing fashion, but got crunched big time in the front stretch melee. There was Tom Collins sitting atop Mark Mortensen with Ricky Thompson’s entire left side sitting atop the Jersey barrier. It was a big one.

United Kingdom resident Ryan Harrison drove his first Sportsman race as he has been coming across the pond to run Mod Lites. He had purchased Jim Boget’s car last year and brought it home. Jim’s brother is working with Ryan this trip…

Mansmith nearly had a big time wreck. Running near the front something broke coming out of two, he slowed dramatically, tried to take it to the outside, but came into contact with another car. He decided to stay in the middle of the track and everyone took evasive action averting a major pile up…

Tim Fuller won his heat by five seconds, Jessey Mueller his by 2.2 seconds and Mahaney by 2.1 seconds…

Heat winners for Pro Stocks included Ivan Joslin with a tribute car to his dad Dave who died in the Spring. It was a .227 win over first year Josh Coonradt (who finished third in the Classic). Mark Sullivan in Jack Hamm’s car won heat two by 1.5 seconds over Justin Knight. Jay Casey and Hondo winner Nick Stone had a tremendous battle in heat three with Jay winning by nearly four tenths of a second. Not to be outdone Rich Crane won the final heat over A.J. Walters by a half second…

Tim Hartman Jr. had a good heat run in new Hall of Famer John Kollar’s 10% as he came home second behind Schilling. Warner beat Cody Clark in second qualifier while Chad Edward simply ran away with heat three over Collins…

Fonda fans were decked in orange in tribute to Jumpin’ Jack and along with all of the Hondo t-shirts this was a group of people who loved racing and loved their drivers. It was so much fun to be part of it all…

Many thanks to all of the officials and drivers as well as fans who helped me get through the night at Fonda.

Comments, news and info please send along to foley395@hotmail.com