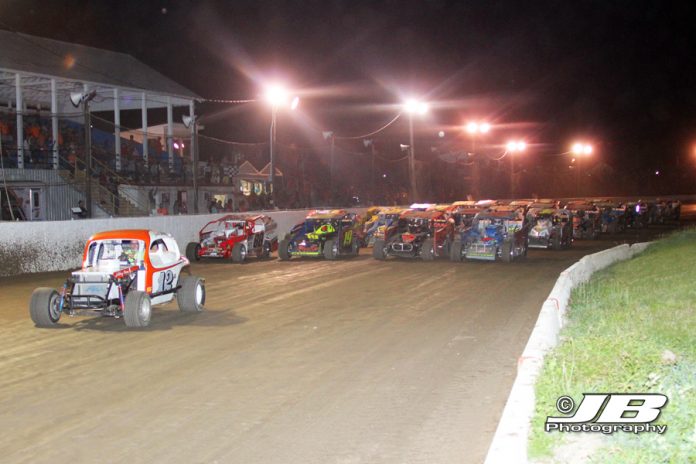 FONDA, NY – When you roll into Fonda Speedway now a days its hard not to think that the orange colored 12A of Jack Johnson isn’t going to roll out of the pits from his first spot along the wall in turn four with Jim King on the microphone saying “From Duanesburg NY its Jumpin Jack Johnson”.

What’s not missing is the legendary stats that Johnson put up. 149 wins in big-block competition, 11 track championships and mixed in within those stats was a man whose stature cannot ever be forgotten. Helping countless racers out with advice on set ups, or just being someone to chat with during the races, his presence was felt even if he wasn’t there in person.

Jack Johnson was and will always be Fonda. Like the old Yankee Stadium, the House that Ruth built, Jack Johnson’s house was Fonda. You knew when you rolled into Fonda that somewhere in the feature or your heat race you would have to contend with a fierce competitor who would race you cleanly but wouldn’t roll over and let you just take that spot you were racing for.

Johnson once said that he felt that Lou Lazzaro was Fonda. That’s the self deprecating that Johnson showed the world daily. While to some he was a god, a mythic person who people worshiped, a fan once said that when he shaves and he cuts himself he bleeds orange. This is the kind of idolatry that Johnson had on his rabid fans, but Johnson was just a professional racer for a few hours a day and by night he was a husband and a father to Ronnie and Natalie. Its hard to think in those terms when your rooting for the “Jumper” each race. A normal guy with an extraordinary gift for driving.


While the stands are no longer filled with the oceans of orange that was the 80’s and 90’s, no longer is there a battle on the track between Jack and C.D. Coville or Dave Lape, but we have our memories and our photos to cherish.

Fonda did right in honoring their greatest driver and one who put Fonda on the map as the Track of Champions. Jack Johnson will live on forever in the hearts of the fans who rooted for him each week while racking up the wins by the hundreds all over the northeast.

Fonda is Jack’s home and will forever be. Thanks Jack for all those years of domination and for helping so many out in so many ways. A legend for all time. 12A forever.