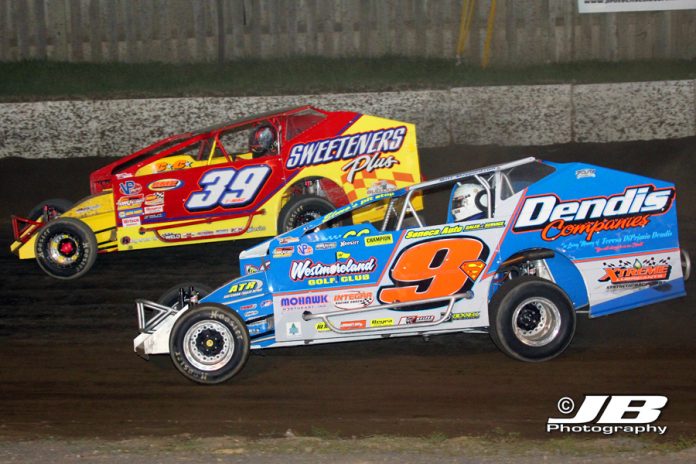 “I’ve never raced this race before, but I’ve always wanted to” said Lucas Oil Late Model champion contender Tim McCreadie as he walked to the driver’s meeting on Wednesday night at Fonda Speedway.

McCreadie was one of just a few, but quality, outsiders who travled to the historic half mile for the Jack Johnson Tribute Night.

Tim was back in New York State regrouping for the continuing Late Model effort and had a free night.

He said, “My dad raced against Jack and I grew up around Ronnie (Johnson). When he was 60 he was racing like he was a 20 year old. We all wanted to be like him when we got older. We are always racing the Late Model so I really wanted to be here if I could. I wish I could do more than just be here tonight as we are all friends and we were always racing together.”


McCreadie added, “There was a World of Outlaws race tonight, but I wanted to be here at Fonda.”

Tim started out the night and in hot laps found himself on the back of a wrecker as the drive line in the Sweetner’s 39 had broken and he rolled to a stop in turn two.

The turnaround for heat action was simply too much to overcome so he had to start 25th, or last, on the feature grid.

However, by the midway point of the 50 lapper he found himself in the top ten and eventually finished off with an eighth place finish.

Ironically, the final car he passed for on track position was the driver he grew up alongside…Ronnie Johnson.

Being available to run The Jack Race was just a matter of perfect storm circumstances.

Tim noted, “We are working in Vics (Coffey) shop changing over trailers. I am moving all my stuff to Vics trailer.

Most of his equipment was based in North Carolina, but Vics shop is in New York. Tim basically does the work on his car by himself while Vic does a similar thing in regards to the Modified.

This year Tim is running as the Longhorn Racing car, but he said in regards to the arrangement involving Longhorn, Coffey and himself “Is a bit complicated to explain.”

McCreadie is having a stellar season and ranks third in the race for the Lucas Oil Late Model championship.

He said, “It’s going good and there is probably around 200 points between Scott(Bloomquist) and Josh (Richards) which is really not a lot in the system they use. It is probably a total of six or seven positions.”

Last year he didn’t win, but noted, “I had a good year and we ran up front”, but already this year he recently captured a $53,000 to win LM event and in his rare visits to the Modified wars he won The Big Show at Malta and another huge check at Weedsport.

Previously, TMac competed in the World of Outlaws series, but he has made a switch.

Explaining some of the differences he said, “Not only are the Saturday night purses better, but the format is much friendlier for me.”

So for at least one night New York fans got to see one of their favorite sons return to the Modifieds at the Fonda Speedway.

It might not have been the night he had hoped for, but he always wanted to run this race as a tribute to not only a favorite of his, but also his dad Bob McCreadie.

Victory was the goal, but recognizing a man who has given so much to the sport was high on the agenda for Tim McCreadie.