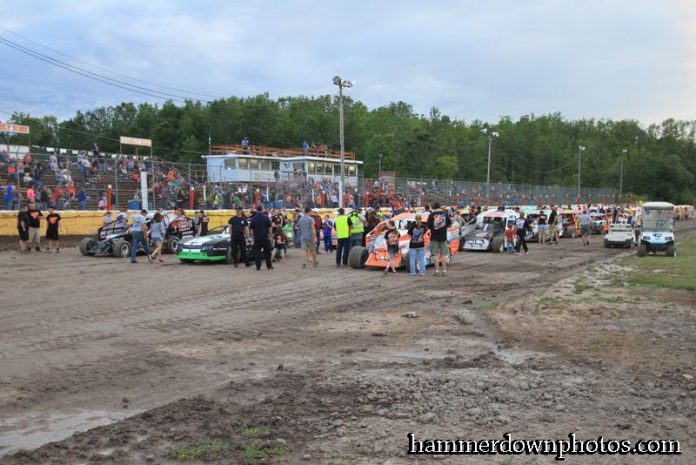 Friday night was a wash for me with no racing, but not for Brewerton Speedway.  They got nine heats, two features and four laps of the Modified feature in before a storm ended the night early for them. Kevan Cook returned to his former racing home to claim a Late Model win where he enjoyed several IMCA Modified wins and championships. Chuck Powelczyk was victorious in the Four Cylinder Stock class before the rains came. Watch the track website and social media outlets for rescheduling of the remainder of the Modified feature, as well as the Mod Lite and Sportsman features.

Saturday I was off to Fulton Speedway for a regular show. They ran 13 heats and six features in three hours flat with over 115 cars in four divisions. Mad Max McLaughlin went to the high side and never faltered from that line to win his first Dirtcar Big Block Modified feature in His career since signing on with the Henke-Baldwin team. I don’t have to tell you how bittersweet it was for him and his dad “Magic Shoes” Mike McLaughlin in victory lane.

Chris Cunningham had a storied career in Pure and Pro-Stocks before moving into the Sportsman Class. Over the last 3 years he’s learned and worked at improving his efforts consistently and progressively. In the first Sportsman feature he took the lead from Ryan Hatherill and drove away for his first Sportsman win in that caution free event. “RD III”, Ron Davis III returned to his former winning Bicknell Chassis to win the second Sportsman feature of the night.

Chad Homan parked his Late Model in victory lane again with Chris Fleming and Brett Belden pushing their cars to the limits to try and catch him. Brett has been very consistent all year and improving weekly. I wouldn’t be surprised to see him grace victory lane soon. The Novice Sportsman features were won by Matthew Becker and Rachel Zacharias.


Utica-Rome kicked off the action at 7p.m. Sunday evening for a regular show, plus family autograph night. The front stretch filled with the cars, stars, and fans seeking a close-up experience with their favorite drivers during intermission. The entire event only took around 3 hours and 22 minutes.

At feature time the Sportsman rolled out first. Mark Effner had a healthy lead that grew from the start, but veteran Sportsman driver Matt Janzuk chased him down to challenge for the lead. In the closing laps Matt drove hard into turn three under Effner and pulled a gutsy slide job to take over the lead. Effner held on for a solid second place, showing major improvement throughout the year.

The Modified feature looked like it was going to be swept by Danny Varin, who took the lead on lap one and opened a wide gap up between himself and second place. However, Matt Sheppard is proving himself to be the man to beat wherever he shows up. He was picking his way through traffic until no one fell between Danny and him except lap traffic. As the laps clicked off Sheppard was closing but Varin appeared to be comfortably ahead enough to win. That all went up in a puff of smoke as Varin’s motor blew in the front stretch entering turn one. Sheppard went on to win over Pat Ward, whose consistency is keeping him up front every week.

I had to go after that so I didn’t see the Pro Stock race, so you’ll have to read about it in the official speedway press release her win Dirt Track Digest.

Saturday afternoon I had the distinct honor of memorializing a decorated Korean War veteran by officiating his funeral. It got me thinking about our troops and their sacrifices, either in time away from loved ones, or in casualties of war. The amount of honor given this man by the local American Legion Honor Guard, Korean War Veterans Association Honor Guard, and the United States Army Color Guard was overwhelmingly beautiful. Afterward I met the deceased’s great niece, who informed me she is enlisting into the Army to pursue a career in Law Enforcement. I know this has nothing to do with racing, but it does touch the everyday life of racers in ways we often neglect to recognize. It reminded me of the importance to cover these brave men and women in prayer.

I’ve spent a lot of time teaching about prayer in recent columns, and based on the experiences I had Saturday, I’m going to say a little more. As Paul the apostle was writing to Pastor Timothy, who pastored the largest church in the world at that time (guesstimated to have 30,000 people under his leadership), he had this to say to him:

“Therefore I exhort first of all that supplications, prayers, intercessions, and giving of thanks be made for all men, for kings and all who are in authority, that we may lead a quiet and peaceable life in all godliness and reverence. For this is good and acceptable in the sight of God our Savior, I Timothy 2:1-3 NKJV”

Notice that God requires us to pray in many ways for all who are in authority over us in government, employment, or anyone which rules over us in any way. I’d say that could even include race directors, flaggers, and anyone at the tracks that enforce the rules under the authority of the owner of the race track.

First, supplications are offered, which are requests for our needs, or someone else’s needs to be met. General prayers for their good, blessing them and believing for God’s best for them comes next. Intercession would include asking God to stand in the gap for them if they have an immediate need or challenge only His strength could override. That would include praying for their health, well being, financial stability, etc. Lastly we’re told to give thanks for them. Have you thanked God for your race director, promoter, flagger, or pit steward today? How about the tech inspectors that keep the playing field level for everyone?

Paul went on to say that offering those kinds of prayers for everyone over us in authority would lead us into a quiet and peaceable life. Wouldn’t it be great if there was less drama in your corner of the sport? Pray for the people around you.

Paul did say to offer these kinds of prayers for all men, plus those in authority over us. Did you remember to pray for that guy that cut you off on the highway? How about the other driver that pinched you off and took your line away? How about your church leaders? They need a lot of prayer too. These are the kind of things we can pray for that calm us and quiet our hearts.

Paul went on to say that as we pray for everyone in this manner it’s a good thing, acceptable in God’s eyes. Jesus taught that merely thinking about bringing fatal harm to someone else makes you guilty of murder in God’s eyes. If you begin to do what Paul instructed Timothy to do, you’ll go from being a slayer to a pray-er, and God will be pleased with your progress as you seek to work out your faith in reverence to Him.

Living with less drama, more of God’s favor, and a quiet and peaceable life sure looks like a better way to live to me. How do you see it?

We’re always available for anything you may need, or anyone else in your circle of friends. I’ll be on the road next weekend moving my son back to college but will still be available through email at:
flchaplain@windstream.net, or on our Facebook page at Finish Line Chaplain. Have a blessed week. I’ll be back soon.