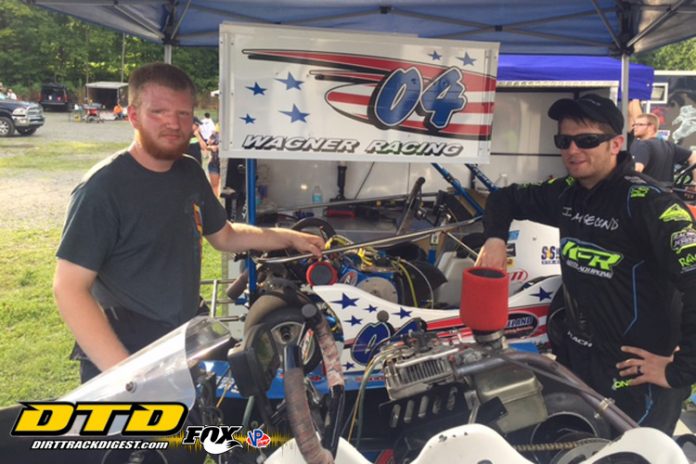 This past week was like a blast from the past as we were at races four nights in a row, Thursday at Caroga Creek Speedway for a special night of racing and fund raiser for Albany Medical Center Melodies Center for Children with cancer and blood disorders.  The night included several guest drivers racing in karts for a good cause, Keith Flach, Craig Hanson, Bobby Varin, Danny Varin, Larry Wight, Stewart Friesen, Jessica Friesen, Josh Hohenforst, Andy Bachetti, Justin Boehler, Pep Corradi, Chad Edwards, Marc Johnson, Otto Sitterly, Jeff Trombley, Rocky Warner and Jeremy Wilder are those who came to lend a hand for this special event.  Many also donated items for the Chinese auction.  Josh Hohenforst was the winner of the 20-lap celebrity race.  Several veteran drivers and members of the racing media were also treated to food and entertainment under the Supply Wagon VIP party tent. It was our first trip ever to Caroga Creek Speedway and from what we learned before our trip the new promoter, Todd Moran is doing a great job in bringing the track back to prominence in the karting world.  He has some great people on his staff including one Jim Hillier who is a veteran of PR in dirt track racing.  Jim is the one that sent all the information on the event and invitations to the media.

Keith Flach drove the kart of Jeremiah Wagner of Greenfield Center a regular at the track and before warm ups he told Keith, “I’ve had this kart out twice and won both times.”  No pressure there.  We met another kart regular of the track, Raelin Dunham of Queensbury, NY who started her racing career at age eight and is now 11 and a successful racer in the N.Y.D.K.S. (New York Dirt Kart Series).   Another kart racer at the track was Tom Varin, brother of Bobby and another successful racer.  Tom also runs the Wing Champ Racing Series with 100% of the profits going to charity or people in need.  Tom provided a kart for his brother Bobby for Thursday’s event.   A couple of the veteran guests in the crowd on Thursday was driver Jack Farquhar and Vern Vogel.    Vern was engine builder and crew member for Jack and several other local racers, Jeff Trombley, Dave Lape, and Randy Glenski.

Friday we were back at the Great Race Place for another great night of racing. One of the first people we spoke with was Dean Charbonneau who, after Robbie Speed was DQ’d in post race inspection the prior week, was declared the winner in the Stan Da Man Pro Stock event.  This meant some big money was going into Dean’s pocket later in the evening.  The offer was made to Dean to go to the front stretch on Friday for a celebration of his victory, but he declined.  He said that Robbie was a friend and he didn’t wish to go any further with the issue.  For those who know Dean Charbonneau, you are probably not surprised.  That is the man he is and we commend him for his actions.

Like many attending the events on Friday, we also anticipated seeing Brett Hearn win his 900th career event.  As the feature began, Brett began his customary march to the front until he was sitting third.  After fighting off the challenges of R. J., Matty D., Keith Flach, and Peter Britten, Brett looked to be leveling off in third with Jessey Mueller and Marc Johnson fighting for the lead.  In the waning laps of the event Mueller and Johnson tangled in turn three and gave the lead to Hearn who was sitting in third.  That was all it took and Hearn went on to win his 900th career feature an accomplishment that not many have seen.  We have heard many boast of career wins, but with no documentation.  Brett’s have been documented by many.  On Saturday at Lebanon Valley Ed and his brother Rich presented Brett with a collage of newspaper headline clippings that chronicle each 100 race leg of his path to 900.  For those who want to know, it has taken him an average of four years to win each 100 races.  Hearn went on to win number 901 at Lebanon Valley on Saturday. Also at Lebanon Valley on Saturday, we spoke with Denny Soltis who at 74 certainly fits the title of veteran of the high banks.  Denny remembers the great racing when drag rubber was legal and he knows how to race on a budget.  Denny has less than $10,000 in his car and feels proud to be able to race against those who have much more.

A few weeks ago we told you about Nikki Ouellette who races in the Sportsman division at The Valley.  On Saturday Nikki sat on the front row of the feature and unlike other weeks when she chose to start further back, this week she decided to take her position on the front row.  She went on to finish second.  We commend her on her wisdom to not start on the front row as a rookie.

Another night a Glen Ridge Motorsports Park and things are still looking up for the promoting team of Parillo and Sefrin.  The first meet and greet was held on Sunday and all fans were invited to go onto the track to get autographs from any or all of the drivers.  After heats one half of the promoting team, Ray Sefrin along with other staff went into the stands to pass out race items to fans.  It’s great to see the promoter out among the fans showing appreciation for their support.