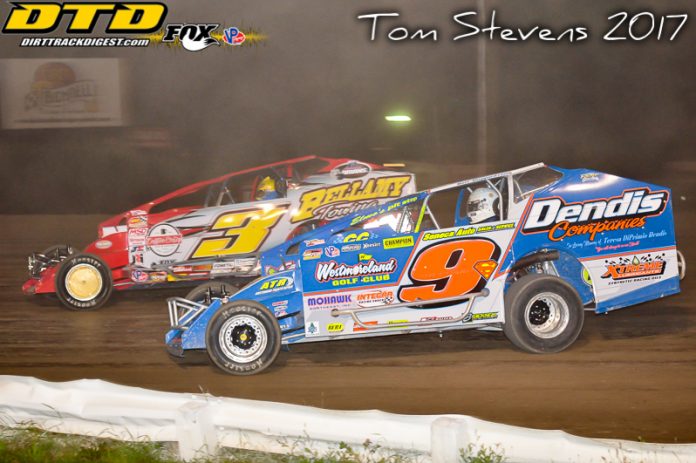 He didn’t lead the most laps, but he lead the one that counted, Sheppard picked up his fourth win a row on the Super DIRTcar Series tour besting a mixed field of weekly 358’s and series big-block regulars.

With an original restart, the field took the green and Max McClaughlin was off to the races aboard his Textron HBR Teo darting out to a quick lead. McClaughlin’s time as the leader was going to be short lived though. Fred Carlton brought out the caution on lap 8 and with the restart on lap 13, Gary Lindberg took over the lead using small block power on the super slick Merritville surface.

Just eight laps later, the yellow flag flew for a gaggle of cars spun in turn 4 that involved the likes of Brett Hearn, Pat Ward and Mark D’llario.


With the field regrouped and ready to go again, the field got the green on lap 30. 14 laps later, Gary Lindberg got his first taste of lap traffic.

Just past the halfway mark at lap 55, while Lindberg was in another country with his small block entry, things got hot and heavy for second. Chad Brachman, a regular at Merritville, overtook McClaughlin for second when he went over the front stretch embankment while getting pressure at the same time from Erik Rudolph aboard his family owned #25.

With 61 down, Chad Brachman and Erik Rudolph went toe to toe for 2nd while fighting in traffic. Rudolph would overtake Brachman a few laps later for 2nd and put on a show for the fans until unbelievable misfortune took him out of not only contention for 2nd, but for the win at the same time as well.

With 73 laps down, Rudolph was able to track down Lindberg and just two laps later they beat and banged on each other as the blasted down the backstretch. With 81 in the books and Linberg still in the lead, and Rudolph trying to overtake Lindberg for the lead, Rudolph spun out in turn 4 bringing out the caution.

Only 17 cars were left on the lead lap after 81 laps of racing with more than 50 of those laps in non stop green flag action.

With Rudolph no longer in second, this moved up defending race winner Matt Sheppard to 2nd. On the ensuing lap 81 restart, Sheppard overtook Lindberg for 2nd but Lindberg just didn’t roll over and play dead. He gave it everything he had over the last 19 laps but with only 5 to go, a final caution flag waved giving Sheppard a clean track with no traffic to slow him down.

“I really thought we missed on the set up tonight. I didn’t think we had anything for Gary (Lindberg) but with 25 to go the car started to tighten up and the yellows helped especially the one with 5 to go, that was super helpful. The only thing we can do is to keep winning races and hope that Decker and Wight have some trouble down the stretch to cut the gap. Its always a pleasure to race here at Merritville,“ said Sheppard.

Gary Lindberg, who was trying to become the upset winner came up one spot short using small block power. “The draw helped for sure tonight,” said Lindberg. “I thought I was a sitting duck out there tonight”.

Billy Decker who followed up his podium finish from the night before at Ransomville with another podium finish was blunt in his comments. “Were not worried about what anyone else is doing. This Page Trucking team is going good, the car is good we just came up a little short. It was a fun night and I am glad that we got Textron aboard now as a sponsor. It was tough sledding out there but we’ll take it.”

While the stat sheet probably wont tell you the whole story, Larry Wight should get more than a Hard Charger award. Wight had a mix up early in the race which resulted in him going to the rear of the field. Wight drove his way up to a ninth place finish after starting 24th…

Feast or Famine – Chad Brachman races on weekends these days. But during the week you will find Brachman working the fields as a farmer. Last year he had a drought out, this year its a drown out.

“I thought when I ventured into this that I would be able to plant in the spring, let it grow in the summer and pick in the fall. Boy was I wrong,” said a smiling Brachman. Brachman is coming off a win this past weekend at Merritville in small-block action. Brachman is in possession of a big-block and plans on hitting some late season shows.

Keith Flach, the affable speedster from the capital district of New York, is still trying to figure out the slick tracks of western N.Y. But you wont find Flach sitting in his trailer pouting about a poor finish. What you will find is someone who is determined to keep trying to improve his results while managing his responsibilities at home and with the upcoming birth of his first child, and being the safety manager for the company he works for, Flach doesn’t have to time to get down on himself. Currently, Flach sits 29 points out of first place at Albany Saratoga, and 27 points out of first at Lebanon Valley. Recently Flach raced in a charity go-kart event for the Melodies Center for Childhood Cancer and Blood Disorders. He joined other modified drivers including Andy Bachetti and Stewart Friesen among others. Also, Flach is a big promoter of the Mohawk Hudson Human Society…

Work Commitments – Some notable drivers will skip Thursday at Rolling Wheels as its just too much racing and not enough crew help. Flach, Scagliotta, and while he doesnt run the Super DIRTcar Series Tour, noted NJ speed merchant Rick Laubach had to back out as well…

Several drivers, who wish to remain anonymou,s have said that lately its become problematic of people showing up to their trailers with as one driver said, “a notebook and a cell phone and call themselves reporters.” These individuals have been known to report false information on the internet forums or make a Youtube video causing grief and unwanted attention…

While its a free and open country and anyone with the money to meet the admission to gain entry to the pit area is able to do so, the working members of the media who invest countless hours and miles on their cars and tolls and gas to get to these events to bring the news and develop a trusting bond with these drivers, these troublemakers are making the job more difficult. Its easy to sit behind the keyboard and make up a name but to go to a trailer and speak with a driver and then try to as one driver put it “dont let the truth get in the way of a good story” is just wrong. These teams invest tens of thousands of dollars and countless personal sacrifice to put a car on the track. How would you like it if someone came to your job and made up stories so that they could say they got “the scoop”.

“Legendary” stat man and man whose death was reported falsely a number of years ago on Syracuse.com, “Racing Russ” was spotted with his bag of notebooks and stats. Happy to report he’s alive and well and will possibly making an appearance at Rolling Wheels Thursday and Tuesday at Malta.“ A few years ago my boss was in England and I had to miss a few events at Rolling Wheels and Weedsport and people actually started to wonder if I really did die” quipped Russ.