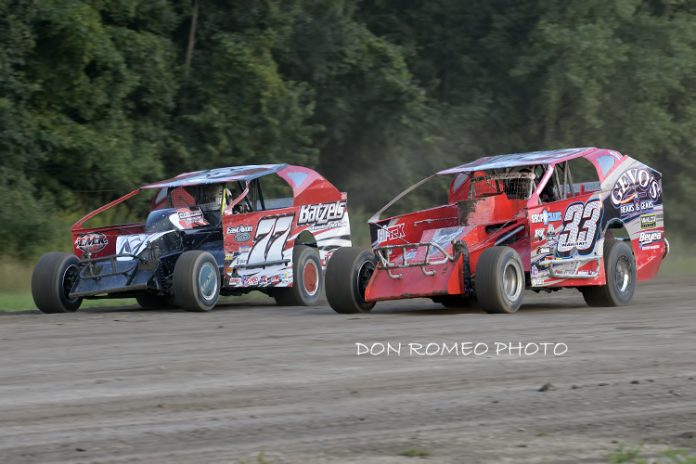 Mike Mahaney appeared to roll across the line in second place at Rolling Wheels Summer Broiler.

However, in order to park with the podium trio you first have to make weight.

Mike rolled the family owned 33 across the scales a few times, but 15 pounds made the difference between being paid for second and coming home at the end of the field.

Mahaney drove the car pit side, jumped out, climbed on the back, popped the fuel cover to check just how much fuel he had left. It wasn’t enough to give him the weight he needed.


Standing with his mom and dad as well as supporters gathered around the hauler as they talked about what could have been.

Mike said, “Well, it would have been a lot harder if we had won, but if I won I probably would have done donuts because I was so excited and I would have picked up mud and made weight.”

Continuing he said, “It was sort of strange as all the mud was off the car at the end of the race. That is uncommon. It was almost like we had taken it to the car wash.”

Mahaney exclaimed, “It sucks being light, but what you gonna do. Seriously, I really wasn’t expecting to make it to the scales tonight as we really weren’t even sure we were going to run.”

He added, “This was our best run in a big-block here. I’ve won here in a small-block. Maybe next time we can make weight. We could have used the money as this year has been a struggle, but we’ve started running well and they say once you start running well you can keep running well.”

Jim Mahaney felt pretty good about the night, that is except for the scales issues, and noted, “We had our family owned Troyer tonight. We weren’t even sure if we were coming.”

He noted, “We are down on horsepower. In the heat I sat there and watched. I saw a $40,000 motor, a couple of $30,000 and ours at $9,500. I know there is potential in this piece (motor). We had a question coming in if we could even be competitive. The night started and we just hoped we could get a top ten and maybe a little more gear would have helped us.”

Continuing, Jim explained, “Well, we put a bigger carburetor on it for tonight and maybe that had something to do with the fuel consumption.”

As Mike rushed around the car during post race moments his mom Kathy came over and uttered, “This just stinks. They work so hard on getting the car here and this just stinks. Sadly, people think we are cheating when you come up too light, but it was just one of those things.”

“Last Night at the Wheels, Mike Mahaney finished second in the Modified Feature and was thrilling to watch, Mike forgot to eat his pasta dinner before the event and came up a little short on the scales, however, His dignity and the way he handled himself has caused Rolling Wheels to reverse the DQ decision and will recognize Mike Mahaney as the second place winner and pay the purse to him accordingly. This is what role models should be made of and we want to encourage Mike as an example to young racers and fans. This payout will not have any effect on the other drivers for the night.”