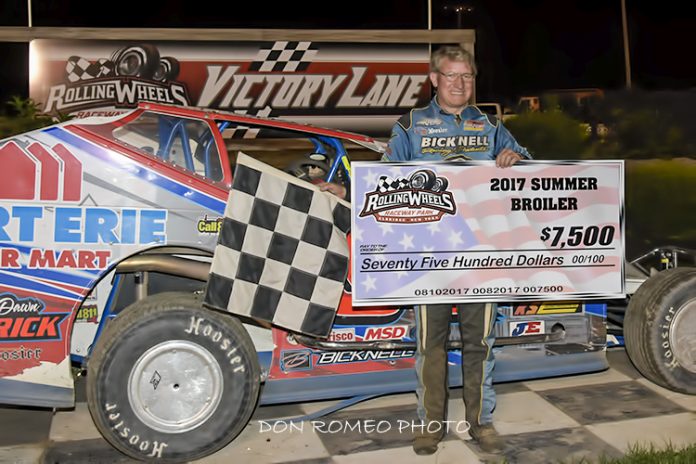 From what appeared to be a Matt Sheppard $7,500 benefit night became a bit more interesting as the 9s pulled to the outside on lap 26 and shut the motor off.

Suddenly this appeared to be a battle between eventual winner Gary Tomkins, Mike Mahaney and Peter Brittan with a bit of Erik Rudolph and Alan Johnson thrown in for added excitement.

Tomkins inherited the lead when Sheppard was pushed to the pits and he never surrendered it.

On a previous restart before the 9s exited Sheppard and Tomkins nearly got together in turn two.


Gary said, “On that restart we were eventually going to meet in turn two if I hadn’t let off.”

However, as he stood by his car after taking home the $7,500 prize money Tomkins said while looking at his tires, “Well both tires are junk.”

It was an interesting race for the 84 as he explained, “I couldn’t get by Mahaney for the longest time. I think the track started to go away and I could still maneuver pretty well.”

The win was a good one for the team and Gary noted, “We’ve been struggling as a team. Darren and Dawn Kendrick have given up the resources to do battle, but we have not been doing it. We decided to take to car to Utica-Rome recently and found some stuff…motor stuff.”

In conclusion he noted that this was a big morale booster for the team and on his success in winning the big pay check races at the Wheels he noted, “I always run good at Rolling Wheels. I don’t know why I just do.”

Runner up Mike Mahaney had his night ruined as the car was 15 pounds to light at the scales, thus Erik Rudolph advanced to second.

He said, of his Ed and Jim Briggs owned ride, “It’s not too bad. Sort of disappointed in the low car count, but I think there were probably a dozen cars who could have won here tonight.”

Continuing he explained, “I had a tough redraw as I picked 10 and really was back in 12th or 13th at one time. The car and track started to come to me. There were a couple of cars with mechanical problems that helped me out so overall I am happy with the outcome.”

He said, “It was a tough race out there tonight. I really feel bad for Mike Mahaney. We had a mediocre car tonight and I question whether we had the right tires on, but it was probably luck that got us third place. However, I have to admit we were mediocre.”

There were a total of 19 Modifieds pit side for the event.