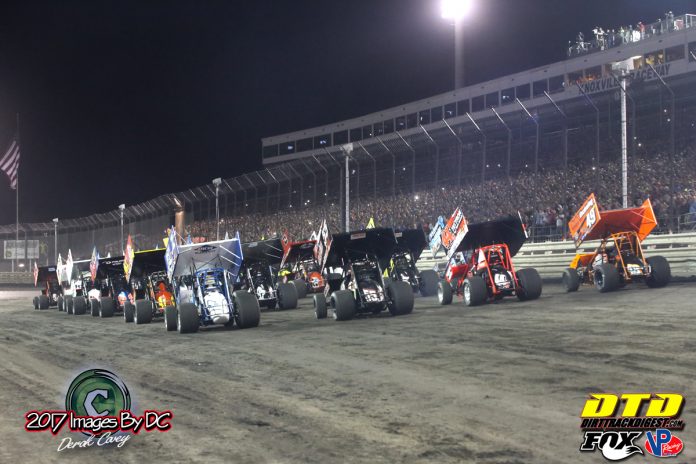 It’s hard to believe, but another Knoxville Nationals has drawn to a close.  What’s not hard to believe is Donny Schatz picked up the win yet again over NASCAR style Kyle Larson. Schatz dominated the race after he inherited the lead from pole-sitter David Gravel just before halfway.

With another Nationals in the books, here are 57 facts and tidbits from the 57th running of the Knoxville Nationals.

1. For earning the pole position in Saturday night’s A-Main, Gravel picked up $2,000 from SprintCarUnlimited.com.
2. Ricky Warner, Schatz’s crew chief, earned Crew Chief of the Nationals.
3. He took home a Craftsman tool box.
4. Dominic Scelzi earned $500 for being the Rookie of the Nationals.
5. The money came courtesy of TheCushion.com.
6. He finished 16th in the B-Main.
7. Ian Madsen’s car won the Best Appearing Car Award.
8. Terry McCarl finished second in the voting and Gravel finished third.
9. Best Appearing Crew Award went to Jason Johnson.
10. Ian Madsen’s team finished second followed by Harli White’s team in third.
11. Matt Wood donated a replica Sprint Car to the Clauson family on Saturday night.
12. The car was restored to appear the same as the car that Bryan won at Knoxville with on a preliminary night in 2015.
13. Brian Brown was given the Jesse Hockett Mr. Sprint Car Award.
14. The award recognizes the driver that earns the most points during Southern Iowa Speedweek.
15. It includes the Knoxville 360 Nationals, the Capitani Classic, Front Row Challenge and the Knoxville Nationals.
16. Rager Phillips won the night’s E-Main.
17. He ended up being the first caution of the night in the D-Main when it looked like his motor expired.
18. Nine drivers did not return to start the E-Main event.
19. Jake Bubak flipped on Friday night during qualifying action.
20. He returned to make the show on Saturday night.
21. Matt Moro was scheduled to compete in the E-Main but after flipping Friday he did not return.
22. Two drivers did not return to run the D-Main event Saturday.
23. Jamie Veal picked up the D-Main win.
24. Clint Garner, the Knoxville 360 Nationals Champion, finished 10th in the D-Main with Pete Grove’s No. 70.
25. After winning the D, Veal finished 12th in the C-Main.
26. James McFadden earned the win in the C-Main event.
27. Dane Lorenc was the only New York driver in the field. He finished 24th in the C-Main.
28. Jason Sides won the B-Main to make his first Knoxville Nationals since 2012.
29. Brent Marks saw his hopes of making the Nationals go by the wayside on lap 17.
30. Marks got into the cushion hard and ripped the right front tire off the bead.
31. Current All-Star Circuit of Champions point leader Chad Kemenah failed to make it out of the B-Main. He finished fifth.
32. Spencer Bayston drove Kevin Swindell’s No. 39 during the Nationals.
33. His night ended in the B-Main when he slammed the outside wall to finish 22.
34. Joey Saldana’s day ended in disappointing fashion as the former Outlaw regular finished 13th in the B-Main.
35. Brady Bacon was the highest finishing C-Main transfer car in the B as he finished 14th.
36. Lucas Wolfe was the first car in the B-Main to not qualify.
37. Wolfe made it home from Knoxville to run on Sunday night with the Empire Super Sprints at the Weedsport Speedway.
38. The total A-Main payed out on Saturday night was $563,500
39. Tim Shaffer was the first car out of Saturday night’s A-Main.
40. He dropped out when he was put a lap down by Gravel.
41. Gravel led laps 1-22.
42. Gravel brought the caution when a small puff of smoke exited his No. 5 before it rolled to a stop in turn four.
43. Terry McCarl caused a caution in the A-Main on lap 24.
44. McCarl clipped the wall and ripped down one of the sponsor banners necessitating the yellow.
45. At the fuel stop, Schatz led Kerry Madsen, Kyle Larson, Brad Sweet and Shane Stewart.
46. Greg Hodnett stopped on lap 38 to bring out the yellow while running in the top five.
47. Hodnett broke a driveshaft on his Heffner Racing No. 27.
48. Schatz led laps 23-50.
49. Schatz earned $150,000 for his win in Saturday night’s 50-lap A-Main.
50. It was the 10th time Schatz won the event. He’s won 10 out of the last 12 Knoxville Nationals.
51. Aaron Reutzel scored hard charger honors.
52. Reutzel drove up from 19th to finish in the seventh position in the A-Main. He received a Max Pappis steering wheel.
53. Three Australians competed in the A-Main with Kerry Madsen the highest of the group finishing in third.
54. The 50/50 on Saturday night paid the winner $21,098.
55. The total number of 50/50 tickets I bought during the week: ZERO.
56. The amount of money won by me in the Knoxville Nationals pool, $170. Yes, I pulled Schatz out of the hat.
57. The dates of the 2018 Knoxville Nationals are August 8th through August 11th.