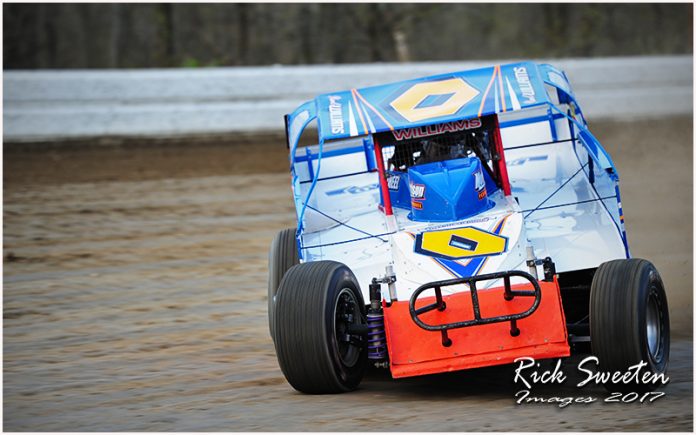 In what has become an all too common theme in 2017, Mother Nature once again “rained” supreme this past weekend and ruined the plans of many a race fan and teams. Big Diamond Speedway, Grandview Speedway and New Egypt Speedway were all forced to cancel due to the weather. Fortunately for Big Diamond Speedway they decided to go with a Sunday rain date for the remainder of the year and it paid off as Sunday’s weather was beautiful.

As has been the norm for this season, Bridgeport has seemingly struck a deal with Mother Nature as they once again the lone track that was able to get in their Saturday night program with Neal “The Wheel” Williams winning his first ever career big-block feature event in the Sal Debruno #0. At Big Diamond Speedway it was the track’s all-time feature winner Craig Von Dohren adding to his career win total by winning career 358 feature #88 on Sunday night.

Big Diamond Speedway 8/13/17 – Rain on Friday night at the speedway forced promoter Jake Smulley to utilize the previously announced rain date of Sunday to get there weekly show in for the fans and the teams.

Beautiful sunny weather greeted the fans on Sunday for a change as a strong field of 358 Modifieds were raring to go after not being in action for a few weeks and when it was all said and done it was Craig Von Dohren who stood in victory lane celebrating the win along with his birthday.


Skylar Sheriff and Justin Grim brought the field to the green flag with Grim grabbing the lead on the start. Grim would go on to lead the first few laps before Duane Howard would ascend to the lead on lap five. Howard’s lead would be short lived as Rick Laubach would get by Howard on a lap seven restart to grab the top spot.

Laubach continued to pace the field as all eyes were on the Searock Fabrications #26 of Ryan Godown who was charging hard from his 17th starting spot. Godown worked his way past Howard for 2nd and was setting his sights on Laubach when his good run came to an end as he coasted to the pits on lap 19 with what turned out to be a broken rocker arm in the motor.

With Laubach continuing to lead the way it was Von Dohren who was starting to make a charge to the front. Von Dohren who is normally a bottom feeder at the speedway had changed his line on this night and was a rocket ship around the outside sometimes running above the cushion as he made his way to the front. The man known as “CVD” charged around the outside of track heavyweights Jeff Strunk, Duane Howard and Billy Pauch Jr to move into second when the caution came out on lap 21. Laubach, who looked like he had the race in hand, surely didn’t want to see the caution come out as he was heading to his first win of the season at Big Diamond.

On the restart Laubach was no match for the #88X Bicknell of Von Dohren who worked by Laubach on the outside to take the lead and the win. Following Von Dohren and Laubach across the line at the finish were Pauch Jr, Howard and Strunk.

Big Diamond will try it again this coming Friday 8/18 when the 358 Modifieds, Sportsman, Street Stocks and Road Runners are back in action. Added bonus will be a 50 Lap endure race along with a Powder Puff race.

New Egypt Speedway 8/12/17 – An unfavorable forecast once again forced the management of the New Egypt Speedway to cancel Saturday nights show.
Ryan Godown will have to wait another week to try to cut into the points lead of Billy Pauch Jr. This would’ve been a epic points battle and it may still turn out to be just that if the racing gods above can convince Mother Nature to give us all a break.

This Saturday night August 19th will be a regular show consisting of the 358 Modifieds, Sportman and the Northeast Wingless Sprints.

Grandview Speedway 8/12/17 – A late afternoon, early evening thunderstorm rolled through Berk’s County on Saturday forcing the speedway to cancel the night’s racing card. They track held out as long as possible but the heavy showers did them in.

This Saturday at the speedway it will be a regular show consisting of the NASCAR 358 Modifieds, Sportsman and Late Models along with the Blast from the Past Vintage Modifieds.

Don’t forget coming on Thursday August 17th, it will another Bob Miller promoted “Thunder on the Hill” show featuring the All Start Circuit of Champions 410 Sprints cars along with the Sportsman Modifieds. Scheduled to compete that night in the 410 Sprints are 3-time NASCAR Champion Tony “Smoke” Stewart along with crowd favorite Rico Abreu.

Bridgeport Speedway 8/12/17 – When Neal Williams reunited with car owner Sal Debruno last season you knew success would come their way. The team was very successful in the sportsman ranks racing up many wins along the way. Williams left the Debruno team when the opportunity of a lifetime came to him to run Modifieds for New Egypt Speedway owner Fred Vahlsing and the pair did okay picking up a win or two along the way. When Williams and Vahlsing split last season you knew it was only a matter of time for the duo of Williams and Debruno to get back together. Debruno helped out Williams last season giving him a car and motor so the south jersey wheelman could stay racing and in the off season they officially reunited to make a full assault at their home track of Bridgeport.

Armed with some of the best equipment of his career, Williams was fast right out of the gate this season in the Teo Chassis #0. Williams put together man top fives and was knocking on the door of victory when it all came apart a few weeks ago when Williams took a nasty flip at Bridgeport destroying the teams modified. Not to be deterred the team had a brand new Teo chassis in the shop and finished putting it together in time to race this Saturday.

To say the debut of their new car was a success would be an understatement as Williams held off point’s leader Ryan Watt to take the victory. For Williams, it was his first ever big block modified win of his career at his home track. Following Williams and Watt across the line were Dominick Buffalino, Rick Laubach and Billy Pauch.

This Saturday night August 19th it will be a regular show consisting of the Big Block Modified, Crate/Sportsman and Outlaw Stocks.

NJ/PA Mod News N Notes:
With their Saturday night home track of New Egypt raining out. Danny Bouc and Brandon Grosso towed up the Big Diamond Speedway on Sunday to get some racing in. It was the first ever 358 modified start for Grosso who was last year’s sportsman track champion who shown himself well with a sixth place finish in the feature…

Local drivers Rick Laubach, Ryan Godown and Frank Cozze will be making the trip north up to the Albany-Saratoga Speedway this Tuesday to take part in the “Stampede at Toga”. The race is part of the Short Track Super Series North region. It will be the first time the series has ever raced at the legendary speedway…

DRIVER OF THE WEEK: This week’s honor goes to Neal “The Wheel” Williams for winning his first ever big block feature event at Bridgeport Speedway on Saturday night. Congratulations to Neal along noted long time car owner Sal Debruno and the entire team on your accomplishment.