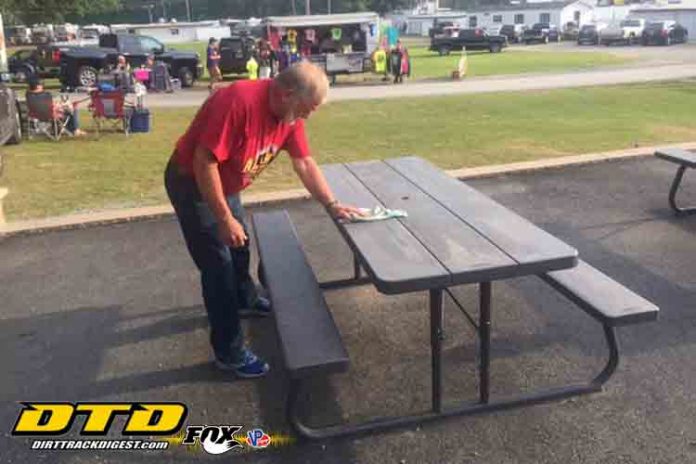 As we arrived at Albany-Saratoga on Friday the first thing we saw was a gentleman wiping   down the picnic tables in the paved concession area. It was Lyle Devore’s Uncle George. Having the tables clean means a lot to people when they sit down to eat in the picnic area. Everything about the track is becoming better each week. The track surface is consistently racy and we want to commend Lyle for all that he has done with the track and facilities.

As we entered the pits we saw Jay Corbin who was making his first appearance at his new weekly home track. Jay said it was time to move on because he was not happy at Lebanon Valley. And he says it will also help him when he races on the tour. Jay has been racing for 16 years, predominately at The Valley and we’ve have talked with him on many occasions. We are happy that he decided to move and not stop racing as many sometimes do if they are unhappy somewhere. In an effort to make up parts of the June 23rd show each week Albany-Saratoga has been adding a feature per week. This past Friday was the Limited Sportsman that had two features. One beneficiary of the two events was Paolo Pascarella of Brunswick, NY who drives the No. 21 Limited Sportsman that sports a familiar paint scheme somewhat like the Kenny Tremont small block car of the past. Some of the same sponsors are on Paolo’s car. Paolo won the first Limited Sportsman feature, quite a feat considering this is his first year behind the wheel of any type of racer. The 17-year-old could not have been happier in victory lane and he was still celebrating as he returned to his pit area. With this young man’s attitude and personality he can go far in the sport. He said he would like to move up to Sportsman and Small Blocks as time goes on.

On Friday at Albany-Saratoga we were watching the Keith Flach No. 43 drive through the field to the front. Keith is one of the few local drivers that follows the Super DIRTcar Modified series and he is the first to tell you, “This has been a learning experience.” He has been on the series paying his dues for the past few years and it looks as though it has paid off. Keith has been coming home after these trips and applying all he has learned. As you know Ed spends a lot of time researching race records and this week looked at Keith Flach’s record at Albany-Saratoga from 2013-2017. Keith has recorded two wins (one coming on Friday) and 20 top fives, he has eight this season alone showing there is great improvement. He is one of only three drivers to get eight top fives at the track this season; the others are Brett Hearn and Peter Britten. We also looked at Keith’s record at Lebanon Valley where he is a Saturday night regular and since 2012 he has four wins and has posted a top five 30 different times. Keith currently sits second in points in the Modified division at both Albany-Saratoga and Lebanon Valley. Keith is quick to give credit to the great team he has assembled, some of the best in the sport, to get him to victory lane. As a third generation driver Keith is continuing a rich racing tradition and it’s a pleasure to watch him race and talk with him afterward. Glen Ridge was in action once again on Sunday and it was another successful night for the promoting team. Over 70 cars were in the pit area and the fans were treated to good racing once again. It was 12-year-old Olivia from Gloversville that impressed the crowd when she sang the National Anthem. Olivia also presented the winners’ trophies for the evening.