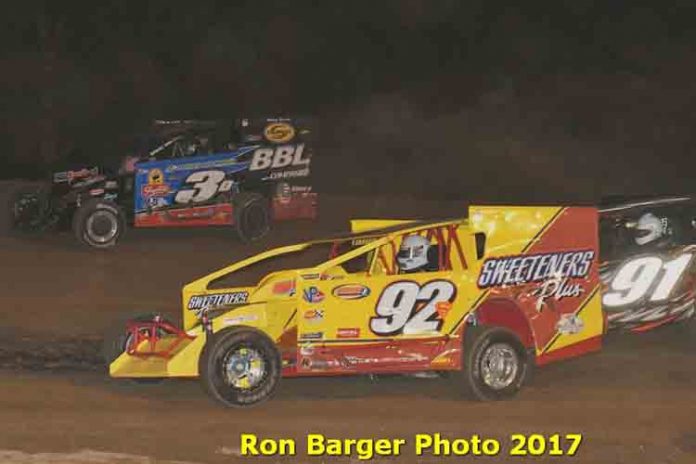 MALTA, NY- He’s been on a tear everywhere he’s been this summer. He’s won 4 Super DIRTcar series races in a row, at least that many in a row at Utica Rome and he’s on fire at Outlaw Speedway as well. Why should there be any difference on what’s essentially neutral territory for Sheppard ?

A packed house watched as Matt Sheppard and Danny Creeden took the field to the green. Some of the most elite drivers in Modified racing were on hand to tackle the quick 4/10 mile oval.

Sheppard led from the drop of the green flag and was quickly setting the tone for the inaugural Stampede at Saratoga STSS event. With just 10-laps on the counter of the 50-lap feature event, Sheppard was already into lap traffic.

While Sheppard was making a mockery of the field up front, coming from 13th in a hurry was track regular and fan favorite Kenny Tremont. Tremont was up to second as he passed Matt Delorenzo coming out four on lap 15.


The first caution flag of the night fell on lap 18. The top five runners at this stage were Sheppard, Delorenzo, Tremont, Decker, who started 16th, and Brett Hearn.

When the green flag fell again an all out war for the top positions broke out. Sheppard was under pressure briefly by DeLorenzo, as DeLorenzo choose the outside line as Sheppard was working the bottom. Eight laps later the caution flag flew again and it was a nearly identical top five.

The field went back at it again and raced just another nine laps before Jerry Higbie brought the caution flag out with terminal front end problems on the front stretch.

Billy Decker muscled his way into second on lap 38 sending Delorenzo back to third. Sheppard was still your leader. As the laps wound down, Decker and Sheppard were using the extreme bottom of the surface and in the closing laps, Sheppard opened up some real estate over Decker in second.

Sheppard went on to score his first win at “The Great Race Place” in nearly a decade. Rounding out the top five were Decker, DeLorenzo, Brett Hearn and Ryan Godown.

“I have had a lot second places here the last few years” said Sheppard. “I want to thank CME for giving me such a good car. I just didn’t know where to be on the track. High, low, I just mixed it up a bit.” said Sheppard.

This is the same car that Sheppard uses weekly at Outlaw Speedway.

Decker, driving for Jeremy Smith, had this to say about his second place finish.

“The car got a little loose. I ended up getting too much heat in the right rear. I had to use the car up getting to the front. I’m happy to be here and I hope the fans enjoyed the show.”

DeLorenzo, who finished third, has had a lot of misery this season at Albany-Saratoga. Just last Friday night as he took the green in the feature the rear end broke. So finishing in the top three was a welcome relief.

“There is no home track advantage when these guys (Decker, Sheppard) roll in here. There wasn’t much to work with in three and four. I chunked up a tire real good but we will certainly take third after all the mechanical issues we have had over the last month”.

Making a first time appearance at the track was Rick Laubach. Laubach had the Ryan Kerr small-block with him.

“This is a neat little place. I like it here. Its clean and racy. Kind of like a small Rolling Wheels.”

Laubach won his heat and then had a car that was so out to lunch he pulled in early. Laubach is a weekly campaigner at Bridgeport Speedway and Big Diamond. Look for Laubach to do some late season traveling and to Super DIRT Week…

Tommy Meier hadn’t been to Malta in nearly two decades, since he drove a street stock. Meier who had to qualify via a consi race and made the show was impressed with the facility.

“You had three grooves out there. A top a bottom and a black middle. You didn’t have to crash into a guy at the yuke tire to pass someone.”…

Brett Hearn will be driving a back up car for Michael Parent in the Thursday in the O’Canada 150 at Cornwall.

“My sponsor 417 Bus Lines has an interest in Cornwall and they asked me to be in attendance so that’s where ill be on Thursday.”

Hearn who doesn’t normally race with sail panels or American Race tires summed up his night by saying,

“We drew bad in the heat, we were able to overcome that and we had a top five. It was a good night. We moved forward all night. It’s just that Matt and Billy are a wee bit better right now.”…

“At first I was just trying to get going trying to figure out the place and as the laps clicked down I finally got it rolling. Its a neat place and if I had a sponsor that wanted me to be here on Friday’s I would surely be here.”

When asked if there was any reason why the choice was made to go to Bicknell when the team was utilizing Teo chassis, Godown said,

Mike Mahaney will be at Eastern States weekend at Orange County aboard the Buzz Chew Chevrolet big-block. Mahaney used a Troyer small-block on Tuesday night…

Stewart Friesen was headed to the Albany International Airport for a midnight flight. He’s racing in the NASCAR Camping World Truck Series race at Bristol. According to his crew chief “we brought a knife to a gun fight tonight.” Friesen never contended for the lead or the win on this night…

Ryan Jordan made his first ever start at Albany Saratoga aboard his Hig Fab chassis started seventh on the night. His crew consists of him and his dad. He’s only entered eight big-block features so far this year after racing small-blocks in the southern tier. The Dryden, N.Y., resident also full-filled a goal of his last week when he raced for the first time at Rolling Wheels where the team suffered a plugged oil filter causing a big scare when the oil pressure went away aboard his Precision big-block. The team changed the filter and all was well again.