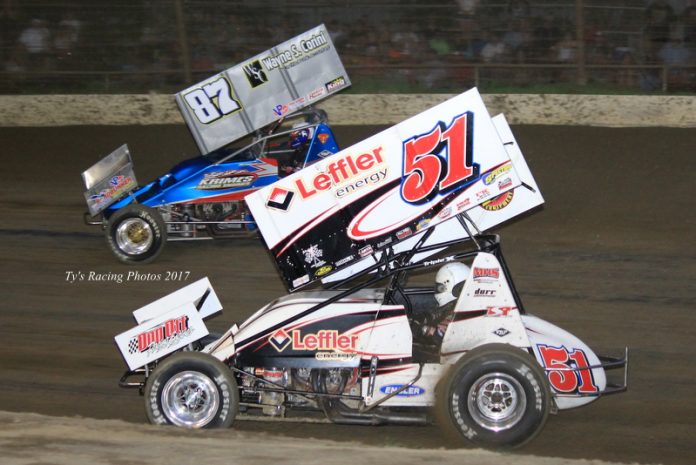 The Rahmer name has been synonymous with winning at Grandview Speedway from the very beginning. Fred Rahmer Sr and the legendary “Fast” Freddie Rahmer have taken many of turns standing in victory lane at the speedway up on the hill. Well, after last night you can add another Rahmer to the list of Grandview winners.

Welcome to victory lane at Grandview, Freddie Rahmer Jr! The young superstar in the making has been starting to make a name for himself this season in the central PA 410 Sprint car world. This season Rahmer has won three times at the Williams Grove Speedway as well as twice at the Lincoln Speedway. As much as Freddie enjoyed those wins, nothing compares to what it was like last night for the Salfordville, Pa., wheelman to grab his first ever win at the Grandview Speedway to join both his grandfather and father as winners at the Bechtelsville, Pa dirt oval.

The 35-lap feature started with Mark Smith jumping out from his number one starting spot with the outside polesitter Ryan Smith right behind him. Mark Smith immediately started to set a torrid pace and had put some distance on Ryan Smith until he started to hit lapped traffic. Ryan Smith had closed the gap on the leader and was setting himself up to make a move for the lead in traffic when Hunter Mackinson and Brandon Rahmer tangled in turn two with Mackinson getting the worst of it flipping over the boiler plate and ending up upside down right against the catch fence. Luckily Mackinson was okay but was obviously done for the night.


With the red flag displayed so the track crew could remove the Sprint Car of Mackinson and make any needed repairs to catch fence, the ASCOC officials deemed this stoppage an open red and the crews were allowed to come onto the track to make the necessary adjustments and add fuel.

After nearly a 20 minute delay we were ready to go back racing. When the green flag was thrown to restart the race it was once again Mark Smith who darted out to a 10 car length lead with Ryan Smith and Freddie Rahmer Jr battling it out amongst themselves for the runner-up spot. The caution flag reappeared on lap 21 for a spin by Brandon Spithaler in turn two. As the cars circled the track under caution, disaster struck the #M1 of leader Mark Smith when his right rear tire went flat forcing him to the pits. This handed the lead over to Ryan Smith with Rahmer Jr and the legendary Sammy Swindell in tow.

When the race resumed Ryan Smith jumped out to the lead but Rahmer Jr was all over him not letting him get away. Rahmer was just waiting for the right opportunity to make his move and on lap 25 he got it. Ryan Smith ran his #94 a little too hard into turn three causing him to get out of throttle. It was the break Rahmer Jr needed as he shot under the “Kunkletown Kid” to grab the lead.

“I was messing around on the bottom after that restart and I figured I would just follow him until he either messed up got loose. I think he hooked the berm a little getting into (turn) three and when we went into (turn) one he peeled down and I just about ran over him then a couple of laps later he did the same thing and this time I was able to take advantage of it and get by him. I didn’t do a very good job of getting by the lapped cars there at the end but was still able to stay ahead of them. Man, this is so cool! I just can’t believe it.”

To say that the racing gods owe Ryan Smith a win at the Grandview Speedway would be an understatement. The “Kunkletown Kid” has been at the front and or led pretty much every 410 sprint show at the speedway in the last two years. Last year for example Smith was leading the feature when the red flag came and while stopped his car developed a water leak finishing him for the night.

Fast forward to July 4th, 2017. Smith was flying in the feature event tracking down and passing NASCAR star Kyle Larson for the lead only to have disaster strike when shortly thereafter his Warko #94 scrubbed the wall going into turn three upsetting his entry causing the car to get up and over thus ending his evening.

Last night it looked like it was going to be a role reversal for Smith. While riding around under caution on lap 21 in second place Smith finally had a break go his way. The leader Mark Smith was forced to go to the pits with a flat RR tire thus handing the lead over to him. It was the break he was looking for.

Smith was able to grab the lead but four laps later Freddie Rahmer Jr would get under him and go onto to take the win. As disappointed as Smith was, he felt a helluva better of his run tonight than his last time at Grandview.

“We’ll take the second place finish for sure but it’s still kind of heartbreaking to have the lead with eight to go and give it away, but I would rather be second than up in the catch fence like I was here last time though. It certainly feels better to put a couple of bucks in our pockets tonight instead of having to spend $5,000 to fix a busted up race car.”

Smith talked about what he think happened after the lap 21 restart.

“I think we sealed the tire up because it just wouldn’t go after that last restart. I had to get into turn three pretty hard to keep my momentum going and a couple of time I pushed it a little too hard and Freddie capitalized. It’s good for them guys, they (the Rahmer’s) are good people and Freddie is a helluva of a driver. It’s pretty cool that we parked together tonight. Old man Freddie has been busting my balls all night and I am sure it will continue when I see him again.”

Even after finishing second tonight things seems to be on an upswing for the team ever since the King’s Royal race at Eldora where Smith had a great run coming from last to finish fifth in the prestigious race. Smith continued his string of good runs by winning the ASCOC race at Outlaw Speedway. Smith talked about the team’s recent surge and hopes that it can continue on.

“I don’t what it is, maybe it’s me but it seems to take us a couple of months to get going. I don’t know if its preparation or what I am doing in the shop or maybe not having the resources we need but once we get to the middle part of the season we seem to get it going. I just hope we can keep it going in the right direction going forward.”

Thunder on the Hill Strikes:

There were 33 sprint cars on hand for the night’s action with Sammy Swindell, Dale Blaney, Mark Smith and Ryan Smith winning the heats…

Talking to Greg Hodnett after the drivers meeting, the driver of the Mike Heffner #27 was pleased with how they ran at the Knoxville Nationals but not happy with their finish after suffering a mechanical issue running well inside the top ten in the “A” main…