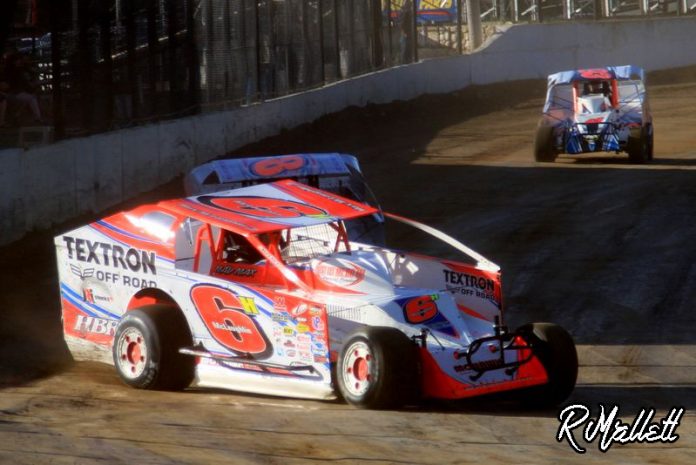 Max McLaughlin has reached the turning point. The teenager from Mooresville, N.C., had been close throughout the 2017 campaign to wins in weekly action and with the Super DIRTcar Series. A few weeks ago he cracked the barrier by winning at the Fulton Speedway. Friday night, he broke through for another one as he captured his first ever Brewerton Speedway win.

“I’ve wanted this so bad,” stated McLaughlin after the win in the make-up feature. “This is the place I had my first big-block race at and now to finally win here, it means a whole lot. To do it with the guys that were in the top five, that means even more. The car was awesome tonight.”

Officially he started eighth when the race took the green several weeks ago, but he restarted Friday in the second row as the event picked up on lap four. McLaughlin was fast from there lurking behind Jeremy Smith and Tim Sears Jr., as they battled for the race lead throughout the first half.

“We tried something way out of the box with this car,” mentioned McLaughlin. “This is a place where we’ve really struggled at all year. I think our best finish here is fourth. To come here, to start eighth, actually before the rain out, and drive to the win is awesome. It wasn’t too slick, but it was slick. If you missed the bottom you were waiting and two guys were going by you. The car drove itself tonight. I can’t say enough about Teo and everybody there.”


As he said, the bottom was the key his victory. He worked it to perfection as he went around Sears and Smith. They ran the middle and the top while he worked as close as he could to the tires on the inside of the track.

“Them guys were working the middle to the top,” stated McLaughlin. “I was staying on the bottom the whole race. I tried the top in one corner, but I just wasn’t as good. I knew if I could hit my marks down there on that restart that they would run the middle and the top and they did. We were able to get to the lead and kind of take care off from there.”

As is usually the case, the first one was the hardest, the second came a little bit easier. He hopes that the next one comes even easier.

“Everybody said once you get the first one they’ll come easier,” said McLaughlin. “Most of that is just nerves. You try so hard to get that first one. Once you finally do it, it’s like you are a whole new driver. Hopefully it’s the start of something good and we can keep rolling.”

In the regularly scheduled feature McLaughlin backed up his win with a solid third place finish behind Billy Decker and Larry Wight.

Decker used his years of experience at the Brewerton Speedway to get by Larry Wight with two laps to go in the second Modified feature. Nearly everyone was glued to the bottom so Decker made tracks through the middle passing Wight for the win.

“I’ve got some experience here so I was waiting for the bottom to slow down, I felt it slow down,” commented the Unadilla, N.Y., driver. “I tried that on the restart and he (Wight) got away, I think everybody was stuck on the bottom and it made it slow down a little faster. That put some crumbs in the middle and I was able to find some.”

Decker put together a solid night with the win and a fourth. That helped him get some points on his closest rival Wight as he was collected in an 11 car pile-up in the first feature.

“I feel fortunate,” said Decker. “We were in the right line on restart and missed that whole melee on frontstretch. We kept the car clean, made some improvements on it and had a really good race the second one.”

A lap 11 restart in the first Modified feature ended with Wight sitting on top of Tim Kerr’s No. 07. Wight’s crew went to work on the car changing the drag link. It ended up not fixing the problem forcing the team to change the steering box. Wight was unable to continue in the first feature as he gave up ground to Decker in the point chase. Repairs were made and he came up a spot short to Decker in the second one.

“We’ll get it back to the shop and see if anything else is bent up,” stated Wight. “Other than that we’ll take the second.”

Wight’s saw Decker to the outside but he felt like he had to stay on the bottom with how his car was handling.

“We were actually turning too good unless I shut it right down and hugged the tires,” commented Wight. “I was losing too much time getting in. The car would come out from underneath me and the right rear would be ahead of the right front. Here you can’t do that. Eventually it over worked the right rear. We had that long caution and it felt like it sealed up under it.”

Sears Finishes Up Solid Night with Pair of Top Fives

Sears Jr. was fortunate that he was able to hop into one of Wight’s backup cars to compete with on Friday night. Sears ended up with a second place finish in the first feature before coming home fifth in the nightcap.

“I got thank Larry, John and Laura (Wight) for letting me borrow a car,” stated Wight. “We had engine problems last week, lost an engine. They were kind enough to let us borrow a car for this weekend so we can keep going.”

He made the most of the opportunity nearly putting it in Victory Lane in the first feature. His line ended up going away late allowing McLaughlin to get away for the win.

“We were really good at the beginning,” he said. “Then, probably the last five, ten laps we started losing a little bit of drive. That ended up the being the difference. I just couldn’t get off the corner and get down the straightaways like he could at the end. Second’s not too bad.”

As mentioned, 11 cars piled in on an early race restart in the first main-event of the night. Some were damaged to the point of no return while others were able to make repairs. The crash started when Chris Hile didn’t get a good restart with something possibly breaking on his No. 5H. Kerr got into his left rear with the pair getting hooked together. From there the outside lane on the restart was blocked with cars piling in.

It was a brand new car for Hile. His car suffered front-end damage as well as massive bending of the rear bumper. He wasn’t sure if rear clip was bent or not…

Pat Ward changed a tie rod, but other than that he had cosmetic damage to his No. 42p…

Mike Bowman and Tom Sears Jrs had their cars damaged beyond quick repair. Neither one started the second feature…

Jimmy Phelps had the car too free in the first feature. He thought the track was going to stay heavy and it ended up slicking off more than expected…

Jeremy Smith gave up the lead in the first feature on a restart. He tried the bottom and it allowed Tim Sears to sneak around him on the outside. He admitted afterwards he should of stayed on the top.

Smith and his team are still recovering from a crash at Eldora Speedway back in July that destroyed a brand new car. They also lost their good motor recently making things tough on the team. They have equipment, but as he said, “we have lots of stuff, but not the right stuff.”…

Rob Bellinger’s awful luck continued as he broke a rod in the engine on the No. 11B. He may be done for an extended period of time as the team tries to regroup…

Gary Tomkins was too loose in the first feature and then his night ended on the hook after he clipped a yuke tire in the finale.