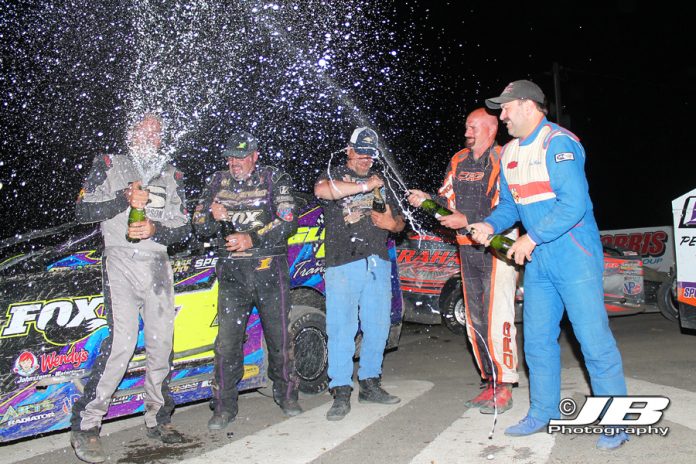 FONDA, NY – “Once more unto the breach dear friends; once more.”

The words of William Shakespeare couldn’t sum up the emotions of a championship chasing race season any better and with the final night of points occurring at the historic Fonda Speedway on Saturday, he didn’t have to.

For Tim Fuller, Rocky Warner and Kenny Gates, the goal that each individually set out to accomplish a mere four months ago would come to fruition with one more night; one more attempt at placing their names rightfully in the history books next to those who came before them.

Fuller Joins his Heroes as a Modifed Track Champion


With his decision to become a weekly competitor at the ‘Track of Champions’ – one that left some wondering the reasons why – Tim Fuller proved that there was a method to his madness in 2017 as the veteran Modified pilot took his familiar No. 19 Bicknell chassis to victory lane once on his way to his first-career track title at the Montgomery county facility.

It’s a career accomplishment that holds special meaning for the Watertown native.

“Jack Johnson meant so much to me at the end of his career and he still does,” stated Fuller. “One of the things I’m going to do this fall is to go see Jack because I haven’t yet. I remember him as being a badass, strong guy and I like racing where he was so prominent; he was one of my heroes growing up and to be able to come here and do this at Fonda, it’s everything.”

Fuller is a professional racecar driver, in that statement there is no doubt, but he’s also a student of history where the sport he loves and has participated in for so long is concerned. It seems impossible for him to not look back at the names that have etched themselves into the history of Fonda and not be in slight awe of the fact that he is now among them; forever a part of the legend and lore that surrounds the half-mile oval.

“I’m one of my heroes own now and it’s a big deal,” he continued. “There’s so much history here at Fonda and we drive by racetracks to get here every week and to win the championship; to do this is a great way to finish it out.”

Where previous track champions like Johnson, Friesen and Varin have reached the pinnacle of the sport by dominating victory lane, Fuller only visited that sacred patch of asphalt once in 2017. If he’s proven anything it’s this; if you want to win a title and do so with the respect of the fans, being consistent is nothing short of a necessity.

“Preparation and racing for as long as I have is key really,” said Fuller. “The beginning of these races, you see Stewart Friesen going and blazing right to the front and he’s young, but my eyes aren’t as good as his are so you have to be patient and consistent. I’ve raced for a long time and you know what you have to do to be there at the end and sometimes it cost us and sometimes it didn’t but being consistent and being there at the end kept me out of a lot of jingles and we could capitalize at the end of the year. Championships are important; I wish I could have had a few more wins but with our hard work and determination and finishing where we needed to that’s what got us here.”

Hindsight being what it is – a trait that many use to their disadvantage – Fuller has no doubt that his decision to call Fonda home in 2017 was the right one.

“Pete [Demitraszek] is the reason I came here,” stated Fuller. “I had offers from Canandaigua Motorsports Park to race there weekly but this was the most appealing. It’s a good track and it pays the most and when a promoter shows that much interest and they want you there, I’m going to go and support them. A lot of people don’t agree with the things he does but he loves racing and I’ll do what I can to support him.”

With one track title now officially attached to his resume, the odds of seeing Fuller back as a regular competitor in 2018 to defend his title are certainly high and with good reason.

“There’s definitely a good chance,” Fuller concluded. “We had a good year and it’s a long time until next spring but I’m definitely not going to rule it out. I enjoyed it here this year; I love racing this track, this place is a thrill when your car is right. It’s just unbelievable here.”

When it comes to Rocky Warner, nobody is better in the Sportsman division at the Fonda Speedway. In short, you can’t stop him; you can only hope to contain him.

“This is incredible,” Warner stated on Saturday night. “It really is. I can’t thank Jake and Nancy [Spraker] enough for this; I really can’t.”

For the fourth consecutive season, Rocky Warner concluded the year atop the point standings proving that he is – like many other speedways he competes at weekly – the man to beat week-after-week and now, season-after-season.

“Everybody says they don’t race for points,” Warner said. “But they do. From the first night of the year, you know who the tough guys are going to be; who the top competitors are and you really have to pay attention and try to distance yourself from them early on and then just try to go out and win races.”

Winning races is something that the ‘Flying Squirrel’ has certainly become proficient at especially since he started racing out of the Jake Spraker stable a few short seasons ago. The momentum he has garnered seems to carry over not only from week-to-week but from one year to the next.

“Four years in-a-row is pretty unbelievable,” Warner continued. “I don’t know if it’s ever been done in the Sportsman division and it’s definitely a great accomplishment especially in the crate class where everyone has the same motors and it’s so equal; it’s tough to pass so you have to outdrive them and that’s something that I’ve been able to do.”

Now that Warner has made an indelible mark in the Sportsman ranks, it seems as if the drive for five-straight titles may not occur in 2018 as the time may be coming for bigger and better things when the 2017 season comes to a close later this fall. The throaty roar of the Modified division may very well be calling his name.

“I’m hoping that we can move up after this year,” Warner concluded. “I’d really like to go out and do some Modified racing next year. You never know what next year is going to bring and hopefully something good happens over the winter where we can make our mark in the modified ranks. I’m not getting any younger.”

Kenny Gates Notches Career Championship No. 6 in the Pro-Stock Division

There are few drivers that have the ability to turn heads before they’ve even unloaded their car at the beginning of the night; Kenny Gates has that ability.

Whenever he pulls into the pit area, his simply lettered hauler immediately draws the attention of every full-fendered pilot within sight. Why? Because when you’re as good as the driver of the No. 35 JACR chassis, competitors tend to notice.

Gates, who notched his sixth championship since 2004 on Saturday night, didn’t have it as easy as some would suspect in 2017. In fact, as many drivers will attest to, it seems that the older one gets, the more difficult it is to remain in top form.

“This was a rough and tumble year for us,” he said in a post-championship interview. “Last year we didn’t really ever finish out of the top-five but this year we had some wrecks and things like that and we had to battle back.”

At one point – even though he won four-straight features at the famed Fonda oval – his point lead over fellow competitor Chuck Dumblewski dwindled down to a mere five markers. The title chase was tighter than many would have thought it would be at the beginning of the season.

“We really had to work for this one,” Gates continued. “It wasn’t easy by any means and the crew really stepped up this year. They had to come out to the shop and work really hard to get the car back to tip-top shape on occasion. Because of them, we were strong at the end of the year and we were able to pull it out. This title is definitely one for the crew.”

One would imagine that after all the success the West Winfield, N.Y. pilot has had throughout his career that another title – along with over 70-career wins – wouldn’t mean as much as the first one or even the second. They would be about as right as a left-handed, metric crescent wrench.

“This never gets old,” exclaimed Gates. “Each title is special and different in its own way and it’s just a blast to get back here again. We’re still running well but to be honest, I wish I could have won the feature again tonight to cap the season off but we may not have won the battle, but we definitely won the war.”

With a career that has now spanned not one but multiple decades, the only question that remains is this; will there be an attempt at title No. 7 in 2018? The best answer to that question is – in fact – another question; does a bear defecate in the woods?

“God yes,” concluded Gates with a laugh. “You know it! Absolutely we’ll be back to defend. I’m still having fun, I’m still competitive and as long as I have my family behind me and my crew and sponsors with me, we are back to defend; you bet.”