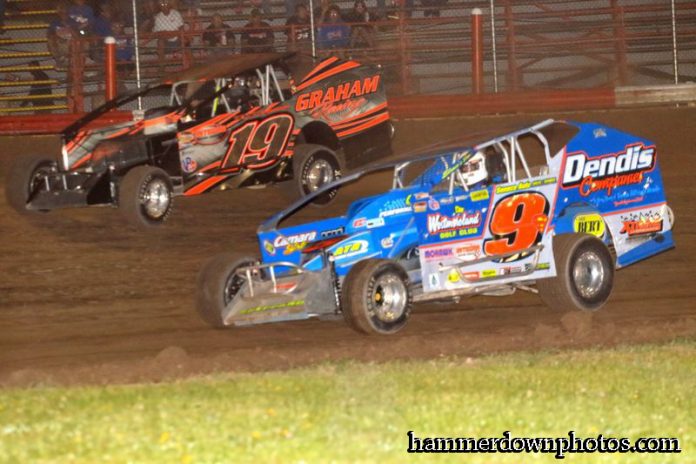 Up until Saturday I’ve been away from the local racing scene for 12 days. Let me catch you up on a few things I’ve been up to. We left on the 12th to drive Jon and another student back to ORU in Tulsa. After spending a few days there we drove back home on Tuesday and Wednesday. Thursday we played catch up at home and around the vicinity. Friday I was set to head off to Brewerton Speedway in the evening but those plans changed due to a sudden illness that caused me to take my wife to the ER. She’s doing better, so Saturday I was able to finally return to Fulton Speedway.

Their car counts were a little off in the Modifieds after a 10 car pileup at Brewerton Friday sidelined a few teams, but there were still 23 cars in the Modified field. 46 Sportsman, 18 Novice Sportsman, and 15 Late Models added to the excellent show.

It was good to see Dwight Nichols back in the saddle in the 14 Novice Sportsman and be able to finish, load up in one piece, and smile about it. He’s had an expensive and rough year but things are looking up for him. He wasn’t the only one. The wreck Friday at Brewerton junked some cars, but through the generosity and hard work of several teams many were able to show up and be competitive Saturday. That’s one of the primary reasons I love short track dirt racing. Check the press release for all of the night’s winners and reports on all the action right here on Dirt Track Digest.

Sunday morning I rolled out of bed at 6AM to teach a Word from the Lord at a new fellowship in Lincklean NY. What a beautiful hamlet that place is in the middle of nowhere. Actually, it’s in northern Chenango County. A good crowd came out and God showed up to exceed their expectations. I dashed out the door after my message for a quick trip to Abundant Life Christian Center in East Syracuse for a meeting about the fall semester class I’ll be teaching. That took me right up to early afternoon. After a quick trip home to check in and enjoy a quiet lunch with my wife I headed out the door for the Utica Rome Night of Legends.


The night included three King Of Dirt Series classes. 23 Pro Stocks for a make up KOD feature plus another full show, 47 Sportsman, 29 358 Modifieds, and 24 of the regular Gates Cole Insurance Dirtcar Big Block Modifieds filled out the pits. Timed hot laps for the KOD divisions, heat races, three consolation races, and five features made sure the good sized crowd got their money’s worth.

The track had bite throughout the show making for some very fast and exciting racing on every class. A new record was set by Matt Sheppard for the most consecutive wins in a season at the Vernon oval. He was slated to start 24th on the grid but got moved up by a few cars that chose to drop to the back, placing him in the 19th starting spot. Matt waisted no time making his way the lead, taking over the top spot on lap 14 and driving away to a half track advantage over Pat Ward. He went on to win the his fifth consecutive big block feature this year to set that record. The rest of the action can be read about right here in coverage on Dirt Track Digest.

One moment that caught my attention over the weekend was the victory lane interview with Timmy Sears Jr. after he won the Modified feature in Larry Wight’s back up car at Fulton in Saturday night. Last Thursday Tim and his wife welcomed a baby boy to their family, and he took the time to appreciate her for all she does to give him the privilege to race, while honoring her for the sacrifices she makes. We pray she and the boy are doing well as she recovers and he begins to grow. Congratulations to the families that get to enjoy this little boy.

Babies are cool little people, but fully dependent for far longer than any other creature’s offspring. The human spirit that animates the body is very large in an infant, but undeveloped just like the rest of the person it gives life to. It’s beyond interesting to see them develop as they grow. They pick up on far more than we realize, and whatever they’re exposed to shapes them in ways most parents don’t realize.

“Behold, children are a heritage from the Lord, The fruit of the womb is a reward.
Psalms 127:3 NKJV”

God considers children a gift to the ones that perform at the level of intimacy that produces them. There are no mistakes. Even though He prefers marriage in covenant with Him to be the primary basis of relationship between a man and a woman before they start a family, He also allows couples to receive the consequence of their sexual relationship when they aren’t married.

The reason little children begin to ask questions about God is because they knew Him before they were in their mother’s womb. This also explains the age of innocence a child enjoys before they begin to stumble over the corruption in the world.

“Before I formed you in the womb I knew you; Before you were born I sanctified you;
Jeremiah 1:5a NKJV.”

God becomes their teacher in heaven before they, as a spirit, are sent into the first cell that forms at fertilization.

“For You formed my inward parts; You covered me in my mother’s womb.
Psalms 139:13 NKJV”

“I was cast upon You from birth. From My mother’s womb You have been My God.
Psalms 22:10 NKJV”

Because God is so in love with our children He has a deep regard for how we treat them. Jesus Christ personally said:

““But whoever causes one of these little ones who believe in Me to stumble, it would be better for him if a millstone were hung around his neck, and he were thrown into the sea. Mark 9:42 NKJV”

As a parent, grandparent, and uncle I can honestly say that many times I’ve failed, yet God’s mercy remains. None of us get it right all the time when we try to parent. That’s why God personally stands with those of us that are parents, to strengthen us, encourage us, and yes, even correct us. As the old children’s song goes “Jesus loves the little children, ALL the children of the world.” I think there are many among us in the world today that have lost sight of that, because they’re uncertain and uneducated about how much love God has for them too.

The subject of the message I taught Sunday at the new fellowship I spoke at was the Love of God. The packed house applauded spontaneously when I finished. I give God all the glory for that, because it was His love that touched them as I taught them the depths of His love. So, if people that have been believers for a number of years learned so much about God’s love in about an hour, how much more do those “unschooled” in the things of God deserve to have the same experiences within His love?

We can all learn from our children how pure love can be, how innocent and trusting, how deep, and how intentional love is. My prayer is that we as adults receive more and more of God’s life changing love, and begin to freely share it with others that look like they need a dose.

I’ll be back at that fellowship in Lincklean again next Sunday if you would like to stop in. The meeting is at 9AM in the Town Hall. There are some race fans there with good taste. One man was wearing a World of Outlaws Sprint hoodie when he showed up. I believe you’ll be blessed by the experience.

We can always be contacted by email at
flchaplain@windstream.net or by using our Facebook page Finish Line Chaplain.