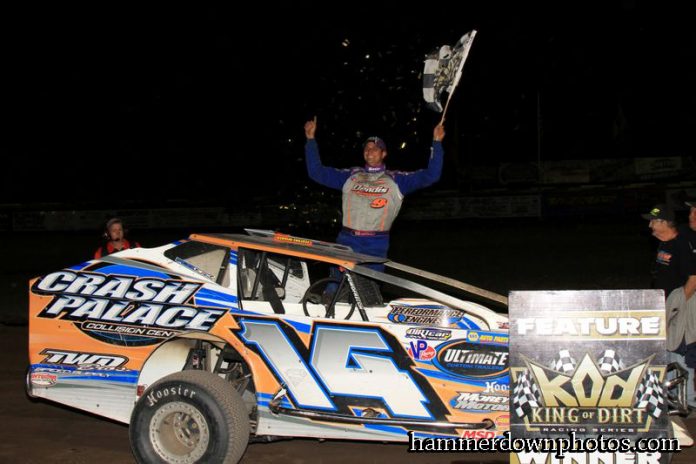 On Sunday night at the Utica-Rome Speedway, Matt Sheppard took two wins in dominating fashion. In the Modified feature, he charged from deep – around 20th – to take the lead on lap 14. Over the final half of the race, Sheppard took off, putting a half of a lap on second place Pat Ward while battling through thick traffic. The win was his fifth in a row at the track, the longest streak ever. Later that night, Sheppard took C.G. Morey’s car to victory lane in the KoD 358-Modified race, passing Erick Rudolph in the middle stages of the event.

The wins were #29 and #30 on the season, and the season is far from over.
30 wins in a season is hard to come by, and only a few have been able to hit the milestone in a single year.

This is already Sheppard’s highest win season to date, besting his 29 scored during 2016. While Stewart Friesen scored a total of 33 wins in 2015, six of them came in a Sprint Car. According to C.O. Racing World, the last driver to win this much in a Modified in a single season was Brett Hearn, who scored 31 Modified wins in 2004. Hearn also put up another monster 42-win year in 2002, and Danny Johnson grabbed 35 two years earlier than that, but that’s all who have surpassed the 30-win mark in a single season since 2000.

So, the date is August 21st, and Sheppard has already racked up 30 wins. Those wins came in just 54 starts for an insane 56% winning percentage on the year. While tracking down the win percentages of past record-setting seasons like the ones above by Hearn and Johnson would be extremely difficult, I’d imagine they couldn’t have been any higher.


What could Sheppard’s numbers be when the season is all over? In 2016, Sheppard started 80 races, and for argument’s sake, let’s say that’s what he ends up running this season. At 80 starts with his current win percentage, he’s on pace for a total of around 44 wins. With 12 Super DIRTcar Series events yet to be ran, plus weekly competition, the STSS, and other specials, 80 starts is a very realistic number for 2017.

Can Matt Sheppard keep winning at this wild rate and hit 40? Find out over the coming months.