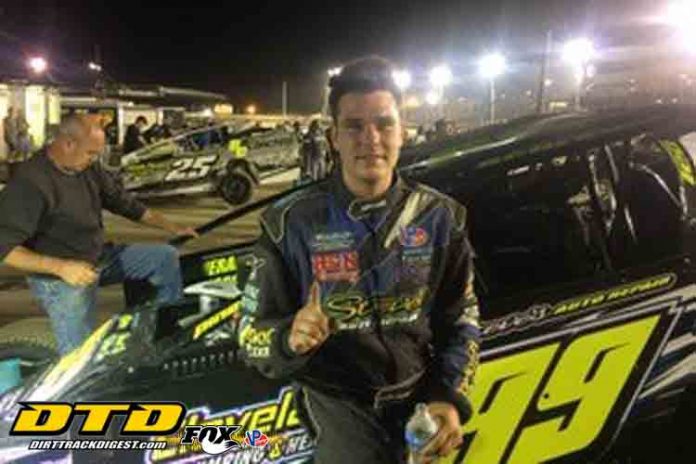 This season we have spent quite a bit of time at the Great Race Place but this past Tuesday there was one major difference. It was the first Capital District appearance of Brett Deyo’s ( BD Motorsports) Short Track Super Series. If you attend Albany Saratoga on a regular basis you know they get a great crowd each week. On Tuesday the ticket line stretched from the ticket window all the way to the woods on the lefthand side of the property.

Once we were inside the pit area, Brett Deyo welcomed all race teams and spoke of how great he felt to bring his series to the area for the first time. As far as the field of racers, it totaled 49 cars, some of the very best in Modified racing. Of those 49, 24 of them have a total of 120 feature wins this season in either Modified or 358 Mods. Running on this same night was the King of Dirt (KOD) Sportsman Series with a field of 39 competitors. One thing about having a different series invade is the drivers that come with it, regulars on the series but not regulars to the track. One driver in this category, Danny Creeden. When we saw Danny he was talking to Halmar driver, Allison Ricci. Danny has eight wins this season and most people that know him know that he always looks to win in all cases. At the end of the night two familiar faces were in victory lane, Matt Sheppard in the Modified event and Rocky Warner in the KOD Sportsman feature. After seeing the turnout in this event we’re sure we will see more Deyo promotions in this area.

Saturday evening we made the trip to Lebanon Valley and we knew we would be seeing a lot of racing because there were two rescheduled features from the rainout the prior week, the Modified and Pro Stocks. With the season winding down the point battle between Brett Hearn and Keith Flach was being watched by many at the end of the holdover feature. Hearn picked up a few more points on Flach and the feature winner, Tremont, added to his Valley total wins, now 130. Tremont’s career win total is now 354. 
“I’ve won three Modified features now but you wonder if you will ever win again.”

Kolby was able to remember and quote the dates of each of his Modified wins. May 5, 2012 was his first and of course that is always memorable for any driver. His second Modified win came on June 21, 2014. Now he can add August 19, 2017 to his win dates.

“Most people don’t know how much work goes into coming to the track each and every week,” said Kolby. “We work every night”.

When Kolby started racing in Modifieds he raced a No. 98 and changed it to No. 99 to honor former Lebanon Valley champion, Dickie Larkin, whose car Kolby’s father worked on for years. Some of the sponsors on the Schroder Modified this season are, Top Notch Builders, Rhinebeck Ford, Cleveland Plumbing and Heating, and Steve’s Auto Repair. Kolby began his racing career in the Sportsman division at the age of 16. He credits his mother and father for much of his success.

“They believed in me,” said Kolby.

Before leaving his pit area, Kolby shared with us that the day was also the anniversary of the loss of a relative, something that was also on his mind. We spend much time at area race tracks and like to cover all aspects of what makes each track successful. After Ray Sefrin and Mike Parillo took over Glen Ridge they put much effort into improving the concession stand along with improving the racing at the track. Both know that it’s important to have good food at the concessions and also to have the right people manning it. For weeks Ed has been waited on by one young lady, not knowing it was Ray’s daughter. Rebecca is always friendly and very polite. Ray and his wife have reason to be proud of her. She makes it a pleasure to get something to eat or drink. And the prices are reasonable.

This Friday, August 25th, is the rescheduled John Grady Vintage Photo event at Albany Saratoga. Plans are to have John at the track. Long time fans should plan to come this Friday to honor the long time photographer and browse through some of his historic photos that will be on sale. Proceeds will go to the Dementia Society.