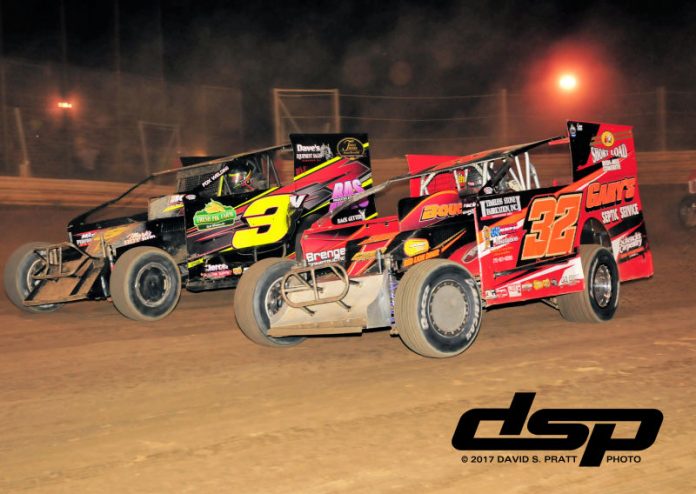 What would be a weekly NJ/PA review without mentioning the evil Mother Nature who once again got in the way of a full weekend of racing. Big Diamond was forced to use their posted Sunday rain date for the second week in a row. New Egypt Speedway was finally able to get in a Saturday night show and as for Bridgeport. Well you know it never rains on the Modifieds at the South Jersey oval. Grandview Speedway was all set to get their show underway when the rains came forcing them to cancel for the evening.

Big Diamond Speedway 8/20/17 – Just like last week, promoter Jake Smulley was forced to use the track’s Sunday rain date as the rains came on Friday like it has so many times this season and like last Sunday it was a beautiful day up in the mountains of central PA to get in some racing.

For second year Modified driver Brett Kressley, it has been feast or famine pretty much all year at Big Diamond. Kressley has had his fair share of troubles this season at Big Diamond but when he does get his car to finish a race it is usually towards the front of the pack.

This Sunday Kressley grabbed the lead from pole-sitter Skylar Sheriff on a lap two restart and once in front the driver from Orefield, PA was gone. Craig Von Dohren who had pitted after a lap one accident definitely made it interesting for the young driver as he came back through the field after his pit stop like a knife going through butter and by lap five Von Dohren was already back up to fifth.


Von Dohren continued his assault on the field moving past the likes of Jeff Strunk, Billy Pauch Jr and Ryan Godown on consecutive laps with relative ease to find himself in second. It took Von Dohren only a couple more laps to rundown the leader Kressley and it looked like Kressley was a sitting duck for the onslaught of Von Dohren.

Von Dohren made his move on Kressley coming out of turn four and down the frontstretch only to have the move refuted by a determined Kressley. Von Dohren gave it his all but Kressley never flinched and was able to hold the track’s all-time feature winner to grab his second win of the season. Von Dohren would finish a disappointed second followed by Ryan Godown, Jeff Strunk and Billy Pauch Jr.

This Friday at Big Diamond is the annual “Prelude to the Coalcracker” for the 358 Modifieds. The Modifieds will run a 40 lap feature paying a cool $4600 to the winner.

New Egypt Speedway 8/19/17 – Danny Bouc has been a contender pretty much each and every week at the New Egypt Speedway this season. Bouc’s #32 Modified is always fast but the young driver out of Pipersville, Pa., has had a little trouble with his consistency at times. There is no doubt that Bouc has the talent and the equipment to contend for a title at New Egypt, but until he can get that consistency going beating out the likes of Ryan Godown and Billy Pauch Jr will be a tall order to do for the youngster.

This past Saturday Bouc had no issues at all as he blasted from his seventh starting spot to the lead in short order and never looked back after that. Billy Pauch Jr came on at the end and made a gallant effort to get past Bouc after a late caution but Bouc was going to have none of it on this night and cruised to his second win of the season. Billy Pauch Jr ended up second with David Van Horn, Johnny McClelland and Ryan Godown rounding out the top five.

With only a few weeks remaining in the quest for the 2017 track championship it is still Billy Pauch Jr leading defending champion Ryan Godown with Danny Bouc in third, David Van Horn and Ryan Krachun rounding out the top five.

This week at New Egypt it will be Fan Appreciation night featuring the Mr. Wingless Classic (25 Laps) race for the Northeast Wingless Sprint Cars along with the Sportsman, Crate Modifieds, Street Stocks & GSVSCC.

The Modified feature will be made up on Saturday Sept. 2nd before the regular night’s program gets underway.

It will be a busy night this Saturday at Grandview. The Late Models will run a special 30 lap feature to cap off their night. The Sportsman division will be busy as they will run the consolation race that was rained out last Saturday along with the make-up feature also. The NASCAR 358 Modifieds will also be on hand to run their regular events as the season starts to wind down.

Bridgeport Speedway 8/19/17 – Ryan Watt raced to his sixth win of the season at Bridgeport after a spirited mid-race duel with Rick Laubach. With the win, Watt extended his points lead over Laubach looking for another big block title to add to his resume’.

Tommy Beamer grabbed the lead on lap one and started to put some distance between himself and the rest of the field early on. While Beamer continued to pace the field Laubach and Watt were making their way to front in quick fashion. Laubach moved past a quick running Billy Pauch just before the halfway flags came out to take second with Watt following suit and getting by Pauch a couple of laps later to take over the third spot.

Caution flew shortly erasing the lead Beamer had built up. Beamer now had Laubach and Watt right on his back bumper. When the race resumed it was Laubach who took over the lead getting past Beamer with Watt following along to get past Beamer as well.

The two title contenders dueled it out for a couple of laps before Watt was able to squeeze by Laubach on lap 16 to take over the point. Watt started to build a lead when the final caution of the race waived for last week’s winner Neal Williams who was trailing smoke in his #0. The restart didn’t phase Watt at all as he raced uncontested to the checkered flag.

This week at Bridgeport the MASS 305 Sprint cars will join the Big Block Modifieds and the Crate/Sportsman on the card for the night’s events.

Look for Meme Desantis to make his return to the track this Friday night at Big Diamond Speedway for the running of the “Prelude to the Coalcracker” race. Desantis will be behind the wheel of the Vince Gagliardo #41. The team will be trying to shake out the bugs in preparation for the Coalcracker and Freedom 76 races coming up shortly…

Another new driver/owner combo that is set to make their debut this Friday at Big Diamond is Doug Manmiller driving for the injured Kyle Borror in Borror’s #B4. If you remember Borror was hurt earlier in the year at Grandview Speedway and is still recovering from injuries…

DRIVER OF THE WEEK: Brett Kressley is this week’s driver of the week for holding off Big Diamond’s all-time leader in wins Craig Von Dohren to win his second of the season at the speedway. The veteran Von Dohren was all over Kressley just waiting for the youngster to make a mistake but Kressley remained cool and collected and never wavered as stayed in front and won the race. Congratulations to Brett Kressley and his entire team on their big win.