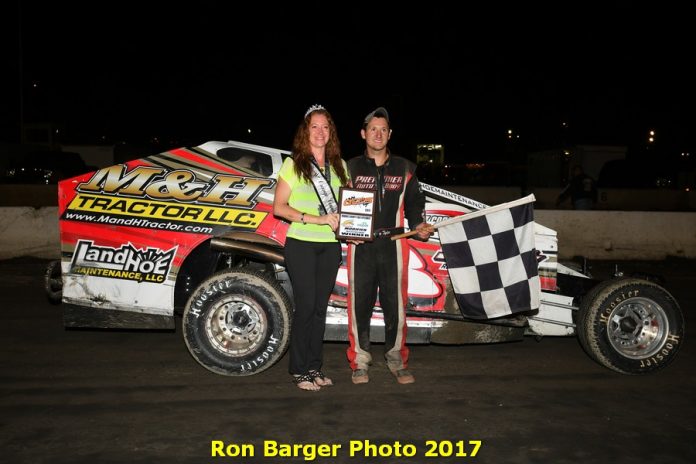 MIDDLETOWN, NY – During the off-season Danny Tyler was in the running for the Bill Pascual owned M&H Tractor sponsored big-block entry but was passed over for Anthony Perrego instead. Fast forward to mid-summer and Perrego and the Pascual team parted ways partially because of a series of engine failures and some promises not being kept. Enter, Danny Tyler.

Tyler, who hails from Cottekill, N.Y., is a regular campaigner at Accord Speedway on Friday nights, and currently the high point man in the Modified ranks at Accord, has not had it easy in his first four or so races in the Pascual entry.

There was the opening night crash in turn four, the crash a few weeks later that resulted in having to have a new rear clip installed on his car and overall just not getting the job done. A lot of self applied pressure began to mount for Tyler.

“I just wanted to prove to the team that I belong here. I can get this car to the front. But when you go out on the first night and crash it and then have other issues, you begin to wonder if the plug is going to get pulled,” said Tyler.


In a show of real class and professionalism over the off-season, Tyler held his head high and didn’t say anything to cast a negative light on the Pasual racing entry. After all, he was just passed over for a car that just finished in the top five in the previously held Eastern States 200 so if he was a little burnt no one could blame him.

“I just held onto my belief that someone would one day see that I can race a car and not use up a lot of equipment.  I run a car at Accord out of my family’s pocket so I know what its like to have to buy parts. When someone is willing to spend the money it takes to run here weekly your just so humbled,” said Tyler.

Tyler was humble in his post race comments but by no means was he humble on the track in the 30-lap feature. Starting on the outside pole, he took command of the lead from the drop of the green and never looked back. In fact, as the race wore on, he was able to open a considerable gab over second place finisher Kirk Horton. The win marked his first ever big-block Modified win. You couldn’t wipe the smile off the face of Tyler and his crew. Though they didn’t hit the Powerball Lottery, they just cashed in at the window on what has been a very tough season.

The night didn’t fare well for Jerry Higbie and Tommy Meier who both had trouble in the feature with flat tires and a dnf for Meier who was involved in a late race jingle on the front stretch and had to be taken back to his pits via the hook.

Meier was only eight points out of the championship hunt coming into the night. Now he’s over 50 points back and Jerry Higbie is now 56 behind Jimmy Horton, who has lead the points battle since opening night. Horton only needs to finish 22nd or better in the final race on Saturday night and he will earn his third career big-block title at Orange County. Horton’s previous titles came in 1976, 1996 and now by virtue of starting on Saturday night, he will be the titlist again in 2017. Horton has also won the Eastern States 200 twice, once in 1991 and 1995.

In an interview by phone on Friday afternoon, “The Monticello Madman” Tim Hindley detailed his reasons for packing up his Landscape Innovations sponsored Teo and will not be returning to Orange County in 2017 except for the STSS finale on the Thursday of Eastern States Weekend.

Hindley, who by trade is a heavy equipment mechanic and spends his days working in Manhattan and the other boroughs of New York City, based his decision to leave on a multitude of factors. While he wishes no negative light to be cast upon Orange County, Hindley is seriously contemplating a complete venue change for 2018 unless some things are rectified.

While Hindley was outright honest and blunt with his comments, he did ask that his comments be withheld as to defuse the situation. Before we get to 2018 though, Hindley said he was highly interested in running the King of The Big Blocks event at Bridgeport on September 23rd.

Missing in action on Saturday were Jeff Heotzler, Steve Dodd and Billy VanInwegen.

Lost In The Shuffle of The Season

Jimmy Spellmon, the 30-year-old Modified pilot from Butler, N.J., isn’t really concentrating on how well or poor his season aboard the Mike Sparta Trucking, Harrington’s Speed & Auto #28 has gone. What he’s has been focusing on his his mom and her remarkable recovery from a double lung transplant this year.

Jimmy parks in turn four every week. He and his girlfriend Debbie Sturs are a fixture of family happiness. Recently Jimmy had his car all mangled up in a heat race and there he was working on a birdcage inside his trailer with his girlfriend getting dirty with him so they could make the feature. Racing isn’t always about wins and losses, its about teamwork, dedication and most importantly, family.

Sunday afternoon the nation was shocked when Jeremy Clements won his first ever NASCAR Xfinity series race. Clements uses the same engine builder as does the Jeff Behrent owned 358 of Tommy Meier, Clements Racing Engines based out of Spartanburg, S.C.

Former Orange County big-block and small block regular, Frank Jashembowski picked up his first win of his career at Bethel Motor Speedway. It was only his third time behind the wheel there and this win followed up on his third place finish a few weeks ago in the “Summer of 69” event.