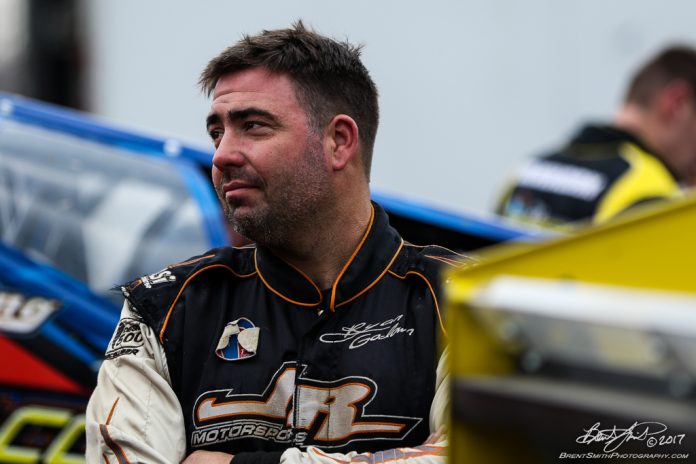 Ryan Godown has always enjoyed going to Super DIRT Week especially when it was run on the mile track at the New York State Fairgrounds. As we all know the mile track is gone now but Godown still has the desire to compete in the annual event. Godown was forced to sit out SDW last year when it moved to its new location at the Oswego Speedway. The driver out of Ringoes, N.J., felt he didn’t have the funds to do it the way it needed to be done so it would be best not to run. Godown instead decided to run his car at the then named I-88 Speedway in the Short Track Nationals. It proved to be the right decision for Godown as he took his #26 to victory in the Short Track Super Series finale.

As good as it was for Godown to win that race you knew his heart was still at SDW. You see, it’s not just about the racing at SDW. SDW is about the atmosphere, the parties, the gathering of race fans that you might only see once a year and oh yeah there is racing as well. To put it in simple words, SDW is an event and although it moved to a new venue it was still SDW and Godown wants to be there.

Godown wanted to go back to SDW this year and give it a try at the new track but like last year didn’t have the equipment he thought he needed to make a solid run. The Petruska and Sons / Atlas Paving #66 team that Godown drives for weekly at New Egypt and at selected big-block races decided they didn’t want to run SDW leaving Godown on the outside looking in once again.

Enter legendary Modified owner Dieter Schmidt. Schmidt has been involved as an owner in modified racing for a long time. Drivers such as superstars Jimmy Horton, Rick Laubach and the late Doug Hoffman are just a few of the drivers to have sat behind the wheel of the iconic yellow Lincoln Auto Body #5 over the years. Earlier this season, Billy VanInwegen and Schmidt decided to part ways with Schmidt deciding to turn over the keys of the operation to young Ryan Krachun. For reasons, unbeknownst to this writer the combination never seemed to click and the #5 has sat idle for most of this season.


Schmidt has always had an affinity for racing the big events such as SDW and Eastern States so with Godown wanting to run those events as well they started talking and the deal was struck. Godown first had to clear everything with his current car owners that he runs for and once that was done it was a go.

“We’ve been working on this deal for a week or two now and once we got it worked out and we worked out some of the details we went forward with it. I’m excited to get going with this deal. It’s all Dieter’s equipment and I have both of the cars at my shop now to go over them and get them ready. We took the car down to New Egypt on Saturday to hot lap the car and see where it was at but we had some electrical and carburetor problems we didn’t expect. We are hoping to take it to Lebanon Valley on Thursday to get some more laps on it but like I said we didn’t expect to have the problems we did on Saturday so now we’ll have to see if we can get them fixed up before them.”

Of course, once Godown showed up at New Egypt on Saturday and unloaded the No. 5 Lincoln Auto Body car the rumors started to fly on the internet sites and over social media regarding Godown’s status with the Petruska and Sons #66. Godown wanted to put a stop to those rumors right away.

“Everything is good with the #66 car. I went over the schedule with the Petruska’s before I even thought about doing this and they had no interest in going to Oswego this year at all. Not with Friesen like last year or with me this year. We still have a lot of races to run with the #66 car starting with Georgetown this week. The new big-block car they put together has been great, it’s been the best big-block car we have this year so hopefully we can get a few more wins with it. New Egypt still has some dates left and Bridgeport has a couple of big-block shows scheduled in September. We are also set to run Charlotte with the #66 car, that’s 100% for sure. Hey, it’s been a learning curve with #66 car this year and we are doing okay. We are all starting to talk about next year already so that is a good sign. Am I happy with how New Egypt has gone this year, no. Are they (the Petruska’s) happy with how it’s gone this year there no, but it’s about working together and we think we know what the problem is and we’re going to work over the winter to correct it. Our crews seem to mesh well together so that is a positive as well.”

Godown reiterated that the deal to driver Schmidt’s car was brought about as a way for him to fill in some races on his schedule that he wanted to run and also to help Schmidt get his car back on the track at two of the marquee events in the Northeast.

“We did this deal just to fill in some races we didn’t have on our schedule and to get Dieter back on the track. It’s all Dieter’s stuff so we’ll see where we’re at with it now and work hard to get it ready for Oswego. We’ll take two cars up to Oswego to get some as much track time as we can and we’ll see how it goes.”

With Godown now running SDW in Oswego, he won’t be able to defend his Short Track National title at Afton Motorsport Park (formerly I-88) this year and he talked about his plans for the week at SDW and leading up to it.

“It would be nice to be able to run the Deyo race again at Afton, but it just doesn’t seem to be doable with the schedule we have in Oswego. Our plan is to take the Searock #26 car we run at Big Diamond after Sunday’s Coalcracker race and get it ready for Utica, Weedsport and Brewerton. At Oswego, we are going to run the Searock #26 in the small-block race and with Dieter in the big-block race. If everything works out good we are hoping to hit Fulton the week before Oswego as well. It’s a lot of racing and it’s a lot of work to get everything ready but it’s what you have to do if you want to race. All the cars we are taking with us up to SDW are Teo cars so that should help our effort out as well.”

Sounds like Godown has a big couple of months ahead of him with lots of racing on his schedule. But for him, that is what he lives for. It will be interesting and exciting to see how the next two months play out for Godown who will be juggling different cars for different owners as he sets his sights on winning a couple of our sports iconic races.